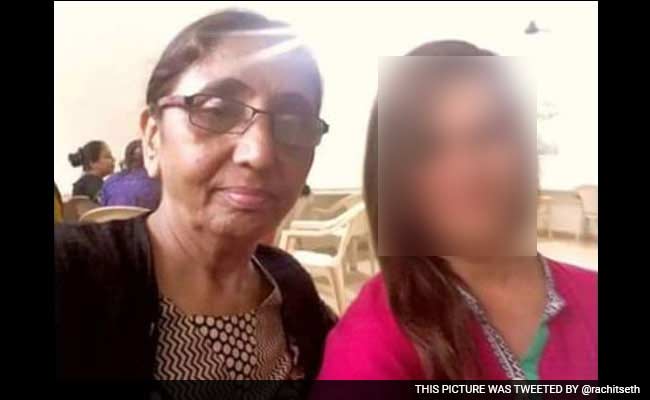 Maya Kodnani, 61, was sentenced to 28 years in jail after being found guilty of the worst massacre during the 2002 riots in Gujarat.

The camp was organised on Saturday by a private group on the outskirts of Ahmedabad.

“Meditating together with former education minister of Gujarat – Mayaben Kodnani,” wrote the woman who posted the photo on Facebook.

Sources close to Ms Kodnani confirmed that she attended the ten-day camp, saying it was to “relieve mental stress”. Ms Kodnani is mentally unstable and was suggested to participate in the camp, they claimed.

The picture however generated a flurry of comments.

@LittleVoice89@shadab_bdk bloody hell, wasn’t kodnani supposed to be in jail? Who’s woman next to her? A public figure or normal person?

Maya Kodnani, convicted mass murderer of 97 ppl, out on bail for health reasons, taking selfies at a yoga retreat! https://t.co/r4X96Gjsr9

Based on the picture, the Special Investigation Team or the SIT which had investigated the Naroda Patiya riots should move the court seeking a detailed inquiry on the status of her health based on these pictures, Shamshad Pathan, the lawyer for the case said.

Ms Kodnani, 61, was sentenced to 28 years in jail after being found guilty of the worst massacre during the 2002 riots in Gujarat, at the Naroda Patiya village in which 97 people were killed.

She was granted bail more than once on health grounds and last year, she was reportedly given shock therapy for acute depression. Doctors at a government hospital said she had shown suicidal tendencies and did not respond to aggressive medication.

Despite the allegations against her, Ms Kodnani became a minister in 2007, when Narendra Modi was Chief Minister of Gujarat. She resigned after her arrest in 2009.