PM Narendra Modi – The Lord Of The Lottery Rings 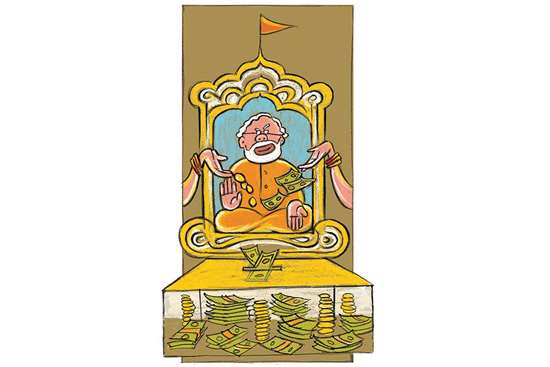 Forget all those dictators’ widows promising you millions. Our prime minister offers much more.
P. SAINATH

The e-mail said: “CONGRATS, you are a selected winner of the 4,000,000 GBP FACEBOOK LUCKY PROMO.” All I need to do is submit my bank details and a processing fee of 150 British pounds to someone in Amsterdam. I think I could manage that. The reason I love internet lotteries is that you always win. I’ve won so many of them, I keep paying Google that additional $2 a month for 20 GB of extra space in my mailbox.Cumulatively, luck in the lotteries has brought my net worth to a whopping $82.3 trillion. That, I’m reliably inf­ormed, is slightly higher than the nominal gross domestic product of the entire world. All it takes for me to be many times richer than Bill and Warren and all those multis put together is to send  my bank details and processing fees to an incredible number of philanthropists in Amsterdam, Lagos, Liechtenstein, Benin and other exotic locations.

Okay, so I haven’t collected those prizes yet. I’ve been busy. But getting all those e-mails makes me feel really good and brings that sense of security I so do need. Something I don’t quite get from all those mails from the widows of dead dictators in Africa asking me to be a partner in charities and to stash their wealth for them. You get mildly wary when you grapple with the numbers. One of those dictators appears to have left behind 200 mourning widows, all of whom have written countless e-mails to me and millions of others. Weepy, dear darling mails. The lotteries are more cheerful and always upbeat. They give you a more exclusive feeling. And you never lose.

After our prime minister’s last three trips abroad, I’ve realised that this is the same reason I so admire him. With Narendra Modi, you always win a lot of money. All across the world, not just in Amsterdam or Benin. (He does travel a fair bit.) And he’s been consistent on promises of money, both before and after the 2014 elections.

Before the polls, his party and he promised to give each and every Indian Rs 15 lakh. Because that’s how much all the black money stashed away abroad, sadly by Indians, stacks up to. Just you wait, he said. We’ll bring it all back. Every last Swiss franc. We’d all be winners. Equal winners. (This is now in slight dispute, since he’s promising a lot more to the Biharis than to the rest of us. Around Rs 1.25 lakh-crore is the number being bandied about. Some unkindly suggest that this could be linked to the upcoming elections in Bihar, but that’s just cynical negativity.)

And the prime minister surprised us by going much further than those guys in Amsterdam and Azerbaijan. He didn’t even ask us for our bank details. He created them. His government, he told the nation on Independence Day 2015, had set up 170 million new bank accounts. These were mostly for poor Indians who had never had one bef­ore. And this was unique in that you could hold the account with zero balance. And indeed, 50 per cent or more of those accounts remain exactly that way. Zero balance. Imagine tens of millions of Swachch Bharatvasi accounts, completely clean of cash or crime. No processing fee either. Certainly not £150 anyway. Goodbye Liechtenstein. Public sector banks, saddled with countless crores in non-performing assets, grumble that each account, used or not, costs money to set up. The entire process could possibly end up costing more than Rs 2,000 crore, they say darkly. But bankers will be bankers. They are always carping.

Modi also outdid himself at this year’s Vibrant Gujarat Summit. In just some 24 working hours across January 11-13, Modi’s model state signed up 21,000 memorandums of understanding (MoUs) worth Rs 2.1 trillion (or $31.7 billion). On average, that meant signing roughly 15 MoUs per minute, or one every four seconds. To go through each MoU at that pace argues speed-reading that would be the envy of Usain Bolt, if he’s into reading. Not quite as impressive, perhaps, as opening 170 million bank accounts at the rate of six every second. But inspiring, given that cracking the MoUs requires thousands of pages to be read. There’s nothing to read in zero-balance bank accounts. When you’ve read one zero, you’ve read them all. Alas, the Vibrant Gujarat website has no clear instructions on where and to whom stakeholders should be sending their bank details and the £150 processing fee.Right now he’s telling us how to rake in the moolah from China’s misery. He’s apparently even summoned 40 of our wimpish captains of industry for a master class on this. The prime minister and his advisors scoff at the idea that the turmoil in the Chinese markets can hurt us. (They scoff at most ideas, but this one in particular, with good reason.) Our fundamentals turned sound overnight in May 2014 and capitalism, therefore, works differently for us. The nationalistic flavour he brings to economic policy is imbued with that healthy, competitive philosophy of beggar-my-neighbour. The Chinese, after all, are just Chinese. Did they have versatile vimanas that could fly forward and backwards in ancient days?

And remember that he already signed agreements worth $10 billion during his visit to that country. If nothing has yet materialised, it’s probably because Xi Jinping and his gang, hobbled by Confucian lethargy, haven’t followed required procedure and sent in their bank details and processing fee as yet. In any case, the amount is just about one per cent of the $1 trillion Modi has declared he will raise for us globally.

When you’ve got someone who performs as well as he does, expectations are naturally high. The pressure is on. There’s 170 million eager bank accounts at the minimum awaiting something, anything. The pressure will surely mount when several amongst that number figure out that there are bank accounts in their name. Thus far, the emph­asis has been on opening them with that speed and rapidity. The ones who don’t know will undoubtedly be informed in due course that they are account-holders. Maybe when that first tranche of Rs 15 lakh turns up.

And make no mistake, the money’s coming. And not just from the black money stashed away overseas. There’s the $75-100 billion in investments from the United Arab Emirates, $45 billion from the US, two billion euros from France, 3.5 trillion yen ($33.5 billion) from Japan, 1.82 trillion won ($10 billion) from South Korea and more. There is also some minor outgoing traffic, like a fund of $5 million to promote small businesses in Fiji. Or a few dollars more for the Bhutanese to play with a hydroelectric toy. Or even the $1 billion credit promised to a bunch of dispossessed nomadic herders in Mongolia to help them discover the joys of modern capitalism.

All of this in a little over a year. I suggest we write polite notes turning down the passionate pleas from the many Madam Abachas of Nigeria asking for help in spending their money. And send in our bank details and processing fees to Delhi. There’s a lot of achche din ahead. Well, a lot of din, anyway.

(Full disclosure: I’m the only person I know who has stated on record that Narendra Modi’s first year in office fully met and vastly exceeded his expectations. I had expected a mere disaster.)