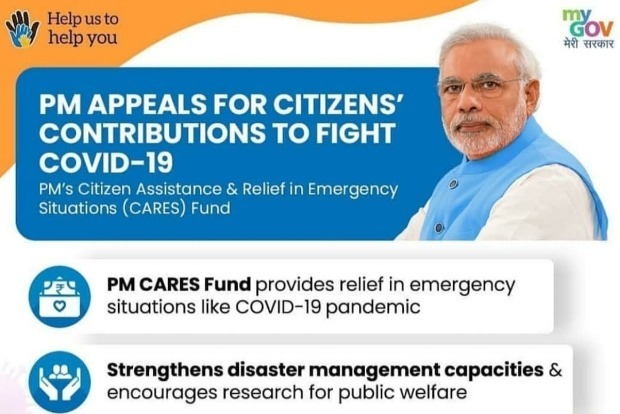 The PMO also cited a Central Information Commission order dated 2009 that the application contains a mutliplicity of requests on varied subjects.

NEW DELHI: A Right to Information (RTI) application seeking details about the donors to the PM-CARES fund, the amount collected so far and the scientific logic behind imposing lockdown was disposed of by the Prime Minister’s Office (PMO) on the grounds of “indiscriminate and impractical” demands made by the applicant.

The RTI plea filed on April 24 by Vikrant Tongad, founder of Social Action for Forest & Environment, was disposed of within three days.

Tongad has already filed the first appeal in the matter claiming the information sought by him is in public interest.

In his application, he had also sought a copy of minutes of the meetings related to lockdown, details of the strategy for COVID-19 by the Centre, testing kits ordered by the government and their state-wise distribution data.

The PMO in its reply, cited a Supreme Court ruling of 2011 saying that indiscriminate and impractical demands under the RTI Act for disclosure of all and sundry information would be counterproductive as it will adversely affect the efficiency of administration and result in the executive getting bogged down with the non-productive work of collecting and furnishing information.

The PMO also cited a Central Information Commission order dated 2009 that the application contains a multiplicity of requests on varied subjects.

“It is therefore not open to the applicant under the RTI Act to bundle a series of requests into one application…no further response is required on the RTI,” it replied.

The opposition and civil society have raised concerns about the creation of PM-CARES fund for COVID-19. Congress president Sonia Gandhi wrote to PM Narendra Modi for merging it with the Prime Minister’s National Relief Fund to ensure transparency.

PM-CARES did not care for RTI, as PMO refused to give information about the thousands of crores of rupees of public money given into the accounts of government-controlled PM CARES fund.

In response to Vikrant Togad’s RTI application dated April 21, 2020, the PMO wrote back within six days refusing to furnish documents and information sought.

It is not on merits, but on technicalities that the refusal was made. CPIO objected that the RTI request contains multiple requests on different topics. The CPIO, Parveen Kumar of the PMO, wrote,

“It is not open to the applicant under the RTI Act to bundle a series of requests into one application unless these requests are treated separately and paid for accordingly”.

This means PMO wants Rs 10 separately for each subject on which information is sought.

It is surprising that the CPIO departed from the simple meaning of the plain provisions of the RTI Act, which mandates the CPIO give information to points concerning their public authority, and transfer the rest of the points to such public authority which holds that information, without asking for Rs 10 for each of the subjects.

Even that other authority must furnish the relevant information and not insist on a separate fee. There is no legal way of refusing to give information unless it is exempted under Section 8.

Even if the application contains multiple questions about different departments, the CPIO shall positively respond to points of request for which he has the information and give such information. If the RTI application is too big, then the Rules mandate:

There are other interpretations and suggestions available from several CIC orders that if the application is too large, the CPIO can chose those points up to 500 words relating to his authority and give only such information held and not exempted under Section 8.

Office Memorandum of DoPT dated June 12, 2008, on the subject “RTI applications received by a public authority regarding information concerning other public authority/authorities”, mandates CPIOs as follows.

It would, however, be the responsibility of the PlO, if an appeal is made against his decision, to establish that he made reasonable efforts to find out the particulars of the concerned public authority.

This was clarified further in another OM dated September 24, 2010:

It has been decided to advise the PlOs that if the details of public authorities who may have this information sought by the applicant are available with the PIO, such details may also be provided to the applicant.

How is it that the instructions of the DoPT were not followed by the CPIO of PMO? Instead, he used an order of CIC and a paragraph of Supreme Court judgment to hide the information which should have been in public domain or shared in response to RTI request.

What is the legal basis of the CIC order?

In 2009, the CIC was hearing the second appeal arising out of CBI’s rejection of the 2007 application made by Rajendra Singh of Delhi, seeking information on 69 points.

The CPIO of CBI performed his duty by sending the questions to concerned departments to respond. One of the CPIOs was going to offer information but demanded Rs 10 as the information sought was different.

The then Chief Information Commissioner, Wajahat Habibullah, held the demand for fresh fee for each subject as reasonable. Neither CPIO nor CIC denied the information.

There is no doubt that the requestor should be reasonable and responsible in seeking information from concerned authorities only. But Shailesh Gandhi, who agitated for right to information, has correctly laid down the law saying that no legal basis has been given in the CIC verdicts which restricted the scope of RTI application to only one subject or sought additional fee on multiple subjects.

There is no such ‘single’ subject embargo. It is the duty of CPIO to honestly use his discretion, wisdom and conscience.

The RTI makers were conscious of the fact that ordinary citizens do not know the nitty-gritty of powers and jurisdictions or areas of power of public authorities. They cannot be expected to be correct regarding what information should be asked from whom. As the civil public servants are well-versed with these aspects, they are entrusted with responsibility to help the applicants.