Police Brutality in HCU – Sensationalism And The Absence Of Feeling 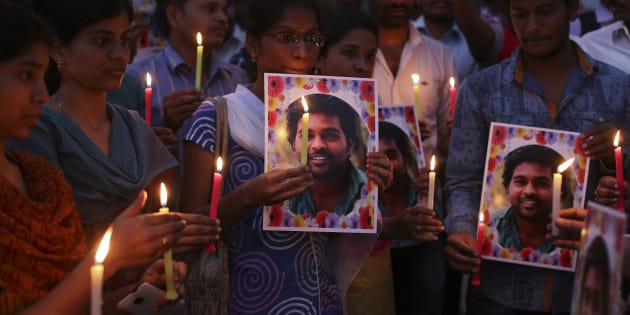 Watch the video below. All 18 minutes and 58 seconds of it. It is not as eloquent as a TED talk. It is not as short as a BuzzFeed clip. It is not a social experiment gone viral. It is something that amidst dancing pandas and dubsmashed videos, we have forgotten. It is also not news, which means it is no longer fresh off the social media grid. The worst kind of reality, the kind that’s old news, the kind that’s the past, fading, almost forgotten. This kind of reality may not light up the dopamine centre in your brain. But it will inspire something.

Anger. Frustration. Fear. Shame. Disgust. Over and over again. This is what I felt as I watched this video. All 18 minutes and 58 seconds of it. At 13 minutes 32 seconds the media is told to leave. At 18 minutes 27 seconds, a man is hit with a lathi. It is a powerful reality that reminds me of the student protest and subsequent arrests at JNU. But there is one powerful difference between these two realities.

This reality overlaps with mine. It is a small overlap – not too long ago, I lived in Hyderabad. I used to know one of the people who were arrested, although we are no longer in touch. Nonetheless, it is significant, because I had not assumed that this kind of reality would ever overlap with mine, even in a peripheral way. It was a naive understanding. My privilege takes many forms: caste, class, sexual orientation, education. To assume that privilege protects is stupid. To assume that I will never feel the ripples of State oppression is stupid.

This is what State oppression looks like: at 8:40am on 22 March, vice-chancellor Appa Rao Podile returns to the University of Hyderabad (UoH). At 9:27am, the university is notified of the same. At 10am there is an “internet access” blackout. By 6pm, there’s been a police lathi charge and stone pelting (from both sides).The police arrests Dontha Prashanth, 36 students and three faculty members. By 9pm, food and water are cut off in the mess.

This news shows up on my Facebook newsfeed, but it doesn’t hit me until two days later when I realize the overlap. Why? Because I am too busy with my television shows and YouTube trailers. Too obsessed about a cyber world to acknowledge the world around me. Anger. Frustration. Fear. Shame. Disgust. It is directed towards myself now. Over and over again.

Someone is organizing a food and water drive for the students at UoH. Someone else has shared the contact information of police stations harbouring the arrested. I call those numbers. The commissioner does not pick up. The Narsingi police station number notifies me it doesn’t exist. The number of the deputy commissioner informs me that this is an office and he is just a constable. Am I calling from the university? Why am I creating a tamasha, an unnecessary spectacle? He is not responsible, hanging up when I ask who is. The cyber world helps bridge the gap between this reality and my ignorance, but it is not enough.

When our attention span lasts less than three minutes, are we capable of responding to anything other than sheer sensationalism?

This incident took place on March 22, nearly three months ago. When our attention span lasts less than three minutes, are we capable of responding to anything other than sheer sensationalism? Can we understand the consistent throb of injustice, the way it numbs us again and again until casteism, fundamentalism, State oppression are so normal they can be ignored? The alternative is feeling the discomfort that our roles play in the creation and perpetuation of injustice. Watch this video, and for starters, feel something. Read about Rohith Vemula. Read about his mother, who left Hinduism because its inequality killed her son. Read about the attempted erasure of caste from California textbooks. And talk to all kinds of people, especially those different from you. I am not urging action, not yet. You cannot act until you understand that this is not about Rohith or Appa Rao or Hyderabad or California. You cannot act until you realize this isn’t some distant news flash. This is about all of us and how we choose to live. Humanity deserves better.http://www.huffingtonpost.in/pragya-bhagat/sensationalism-and-the-absence-of-feeling/?utm_hp_ref=in-homepage

India #RightToPrivacy - Here's what that means for the tech industry
Mumbai man held for rejecting delivery from Muslim agent
RIP Mubarak Begum, One of the Last Links With Hindi Cinema’s Golden Era
Another allegation surfaces against Gouridasan Nair of The Hindu #MeToo