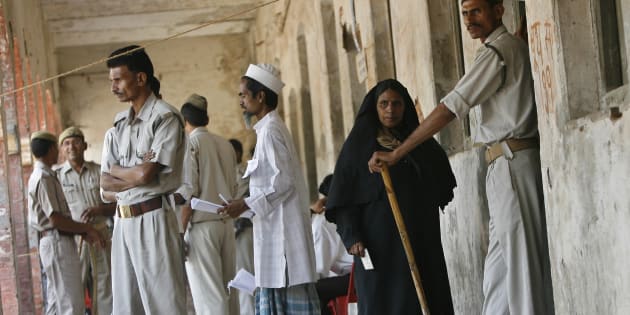 ADNAN1 ABIDI / REUTERS
A Muslim woman waits outside a booth to cast her vote as policemen stand guard at a polling station in Varanasi.
BAREILLY: Jianagla, a village 70 km from Bareilly, is in the grip of tension ever since posters sprang up at more than two dozen places in the area ordering its Muslim residents to “leave immediately”. The message, in Hindi, said that “with BJP in power in Uttar Pradesh Hindus of the village would do what US president Trump was doing to Muslims in that country”.

The posters have turned up days after the BJP won a massive majority in the state. “What Trump is doing in America, we will do in this village because the BJP is now in power,” the posters said, giving Muslims of Jianagla time till the end of the year to leave. The posters are signed by “Hindus of the village”, under “guardian” is the name of a BJP MP.

Most of the posters have been removed by police and the administration but a few still dot the walls, adding to the palpable panic. The text in all the posters is the same and threatens the Muslims of “dire consequences” if they do not leave at the latest by the end of the year.

The posters appeared overnight, and could be seen everywhere by Monday morning. Residents of Jianagla said they had no idea how this happened, even though most of them celebrated Holi till late on Sunday night.

“We slept a little past midnight, and it was only in the morning that we noticed all these posters around the village. We informed police after some residents objected to it,” gram pradhan Rewa Ram told TOI.

An FIR against unidentified persons has been lodged and five youths from the village have been picked up for questioning so far, said officials. A police force has also been deployed. Of Jianagla’s nearly 2,500 residents, around 200 are Muslims.

Rafiq, 52, was one of the first residents who objected to the inflammatory posters coming up in the neighbourhood. “It was a little past noon on Holi that I found some of the posters, following which I informed the pradhan. We have been living in harmony for generations, and do not know who came up with these posters,” he said.

Another villager who wished not be named said that there has been no precedent to this incident. “We have never heard of anything like this in the past. Even though the authorities have assured security to us and action against the guilty, we have been exploring all options including the extreme one of leaving the village,” he said.

Police along with top officials of the district administration have been doing the rounds of the village but is yet to make a breakthrough. “We have been rounding up youths in the village who are involved in small-time printing and photostat businesses but we are yet to get anything conclusive,” Bareilly superintendent of police (rural) Yamuna Prasad told TOI.

Diwali is here - Will the firecracker ban go up in smoke?
SC - If "Bandit Queen" Can Be Released, Why Not"Padmaavat" #FOE
India - Former Monsanto Executive Admits Company Faked Scientific Data To Gain Regulatory Approval
How do India’s top 100 companies fare in terms of sexual harassment ? #Vaw