A Stranger on Lenox Avenue 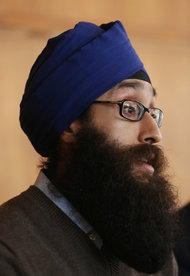 Prabhjot Singh, an assistant professor of international affairs at Columbia University, at a press conference in New York on Monday.

On the evening of Sept. 21, Prabhjot Singh, an assistant professor in the International and Public Affairs program at Columbia University in New York and the co-director of a community health care program in Harlem, was walking near his house in Harlem. Mr. Singh is a Sikh man of Indian origin and wears a long flowing beard and a turban. Around 8 p.m., a group of young black men on bicycles confronted Mr. Singh on Lenox Avenue and shouted racist slurs at him, shouting, “get Osama” and “terrorist.” The young men proceeded to punch his face and upper body.

Some people nearby intervened and the attackers rode off. They then attacked a Somali Muslim woman wearing a hijab. Mr. Singh and the Somali woman were taken to the same emergency room at Mount Sinai hospital and treated for their injuries. The assault had displaced several of Mr. Singh’s teeth and caused a fracture to his jaw.

On Monday, Mr. Singh, while discussing the assault at a press conference, thoughtfully contextualized the hatred projected against him as a reflection of ignorance rather than malice. He vowed to continue his community work in Harlem.

“If I could speak to my attackers, I would ask them if they had any questions about me, the Sikh faith,” Mr. Singh said as he emphasized his commitment to bettering the social world around him. “I would invite my attackers to the gurdwara, make sure they have an opportunity to learn who we are, get to know us. So that they too can get past this.”

I live a few blocks west of the street where Mr. Singh was attacked. I often walk along the same street. I have a beard, I am also brown, and theattack on Mr. Singh scares me. I can imagine being singled out as a brown, bearded male and being asked to atone for the sins of Osama bin Laden or Saddam Hussein.

I am scared because the attack occurred in Harlem, a few blocks from Malcolm X’s mosque. Mr. Singh, who seemed to have been mistaken for a Muslim, was attacked in a part of the New York that has welcomed black and brown Muslims since at least the turn of the last century. Neither turbans nor beards have been out of place in Harlem for generations. One need only think of R&B crooners like Chuck Willis or Rudy Ray Moore or visit the Sunday services led by Edgar Kendricks.

Harlem has hosted Muslims from Middle East, from South Asia, and most recently from West Africa. In Harlem, the black mosque and the black church have stood next to each other for decades, filled at all times with immigrants new and old.

The daily beat of life in Harlem remains the most life-affirming swirl of color and smiles. Harlem is a place where we come together. It is precisely because of this – this deep history and present – of solidarity within the various communities in Harlem that this attack on Mr. Singh is so jarring. What has changed in Harlem? Is it the dreaded gentrification?  Is it this arrival of more monied classes pushing aside the long established nooks and crannies of immigrant life?

On Aug. 5, 2012, Wade Michael Page, a white supremacist gunman, fatally shot six Sikh worshippers at a gurdwara in Oak Creek, Wisc. A few months later, a series of hate crimes against Muslims occurred in New York. On Nov. 19, Bashir Ahmad, 57, a man of Afghan origin, was stabbed outside a mosque in Queens.

A few days later, on Nov. 24, Ali Akmal, 72, was beaten up and bitten on his nose during his morning walk by two men after he answered in affirmative their question about whether he was a Muslim. In early Jan. 2012, a mosque was firebombed in Queens and a house used for worship by local Hindus was attacked on the suspicion of being a mosque.

Throughout last winter, I walked nervously into New York subway stations where the controversial group American Freedom Defense Initiative, led by Pamela Geller and Robert Spencer, had bought space and placed advertisements that showed the photograph of the burning Twin Towers with a verse from Koran next to it. 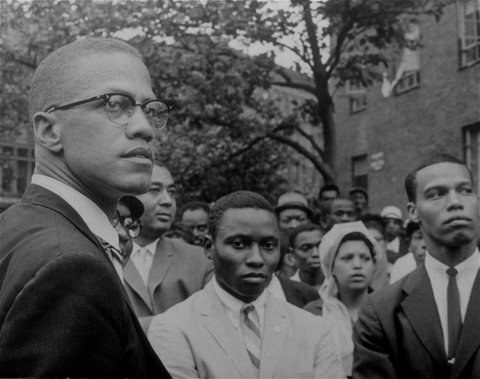 Robert Haggins/Associated Press Malcolm X, the former Nation of Islam leader, left, at a rally at Lennox Avenue in Harlem, New York in 1963.

After The Associated Press reported earlier in the year that the New York Police Department was engaging in widespread surveillance of mosques, playgrounds, and eateries frequented by Muslims, the New York Post ran a cartoon by Sean Delonas depicting hook-nosed, big-bearded, turbaned Muslims with bombs strapped on their bodies, calling The Associated Press to complain about surveillance.

The hate directed against Muslims lies at the heart of the assault against Mr. Singh. His Sikh religious identity, visually marked with his uncut beard and the uncut hair wrapped underneath a tightly wound headscarf, constitutes the bigoted sketch of a Muslim. “Rag head,” “towel head,” “Hadji,” and “Osama” may be the verbal equivalents, but the visual manifestation of this hate speech remains remarkably consistent.

In the public discourse, the question of Islamophobia is considered either too diffuse or geographically elsewhere. It is diffuse in the sense that Islamophobia is given to contain factual roots of misconduct by Muslims, which determine a fair and judicious surveillance of their actions and motives.

In that sense the critic asks Muslims – all Muslims – to either defend against the actions of their co-religionists or assert some other way of combating them. It is geographically elsewhere, because if there is indeed an Anders Behring Breivik or a Wade Michael Page, the mainstream press can sequester and cordon attention.

An exclusionary politics that defines and demonizes a minority group can only lead to mass violence, with or without the sanction of the government. The anti-Muslim rhetoric in America has led to Oak Creek and numerous other attacks on Muslims, Sikhs, Hindus and other people of color.

Hate crimes follow when the role of a minority within the larger majority is demonized in public discourse – their bodies and their compartments are put under legal and cultural scrutiny and their intentions and their motivations are openly questioned.

Is the attack on Mr. Singh an event that bears a relationship to incidents of violence against minorities around the globe? His is, after all, a singular story. Yet, all the other cases of crimes against minorities are also unique. Each represents a member of a community chosen as a target and then subject to annihilation – legal or physical. To resist such erasure, to speak out against the attackers, to educate the community, to build networks of support, are all necessary acts that depend on proper contextualization of the crime.

It is important, as many speakers including Mr. Singh have suggested, that the attackers be made aware of the peaceful nature of the Sikh faith. Similar attempts needs to be made with respect to Islam in the United States.

Given the history of 9/11, that might seem an ambitious demand to make. Yet the hundreds of thousands of practicing Muslims in New York would want us to engage in that activity, to raise our voices in their support just as we are doing for Mr. Singh.