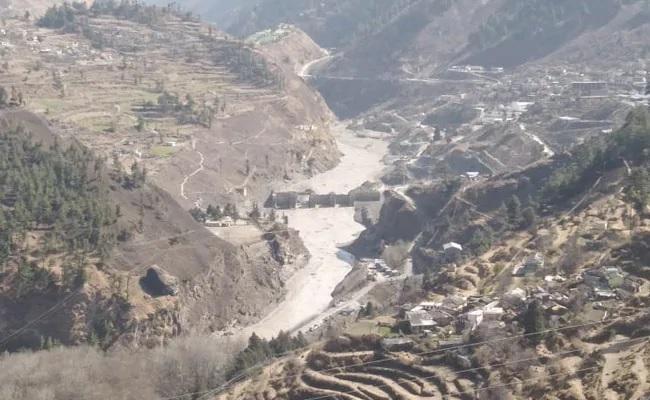 Villagers, labourers live in fear, as they recall death of over 80 persons and more than 120 who went missing in the flash flood disaster that hit Chamoli in February this year.

The affected region of Joshimath in Chamoli district which bore the impact of the flash flood on February 7 – continues to remain extremely fragile. The impact of anthropogenic pressure and climate change is considered the main cause for exacerbating the fragility of the Himalayas.

Over 80 people had died and more than 120 had gone missing in that disaster. The recent pre-monsoon rainfall, which lashed the region, exposed its vulnerabilities and does not bode well for the upcoming Monsoon season. The water level of the Rishi Ganga river rose up to alarmingly high levels during last week’s heavy downpour .

Pawan Rana, a resident of Raini village, who lost his grandmother to that disaster, told Newsclick  that the debris of the Rishi Ganga hydro power project – which crumbled in the catastrophe – has been fragmented in some places due to rains.

Since this solid mass of concrete debris could neither be dug up nor removed, the villagers are of the view that around 34 dead bodies, of those who worked in project, still lie buried. Last month, the body of Rana’s grandmother had slipped out after a heavy downpour.

“The level of the Rishi Ganga river had gone up a lot due to the accumulation of debris left by the disaster in the region; that the pre-warning alarm which was set up after the disaster to give time for preparedness to villagers as well as the management of NTPC’s Tapovan Vishnugad Hydro Power project (520 MW) to access safety during such a situation, proved completely ineffective. Nobody could hear it,” he said.

A new bridge which was built after the disaster to connect the local people of Gangapar to Joshimath was also washed away by the swelling river. In a way, these systems, which were meant to sustain long-term, could not bear the impact of a couple of days of rain.Video file

(The approach road to the tunnel is being eroded by the swelling river. The structures situated close to it as well as the tunnel has become highly unsafe due to continuous erosion. NewsClick can not verify the video)

A purported video and few photographs showing cracks in glaciers in the higher reaches of the region have gone viral as well. “People are very scared that the glaciers may burst again and trigger another flash flood. We may not be lucky this time,” said Rana.

However, district magistrate Swati Bhadauria told Newsclick that she is keeping tabs on the precarious situation and has scientists and experts on the job.

“We are taking this matter seriously. A  team of scientists who conducted an aerial survey of the area will submit their report to the government soon; another team has also surveyed the area from a distance on the ground,” Bhadauria said.

The Head of the State Disaster Response Team, Piyush Rautela, who had led the ground team, has rebuffed speculation. “There is no imminent danger as was portrayed by locals who had gone higher to collect keera jari herbs and took images of the glaciers using their mobiles. These cracks or crevices dotting glaciers are nothing unusual or alarming,” he clarified.

The Tapovan Vishnugad project site faces danger in the given situation. The single-approach road which leads to the project tunnel has eroded to a large extent. The remaining portion could give way. “This road is the only way to reach the tunnel. The lives of workers navigating this road is in jeopardy. If this road is gone the tunnel work will also come to a halt, which will mean that a project worth hundreds of crores will go kaput,” revealed a reliable source.

There is a growing resentment among workers and contractors against their management which they said was found sleeping through this crucial period. “There was a four-month period for preparation and to deal with the challenges of the upcoming monsoon after the disaster struck in February. The banks of the river in close proximity with the structure could have been strengthened as could have been the approach road. But nothing was done,” the source added.

However,  R.P. Ahirwar, head of the project, clarified: “The banks of the river will not be strengthened as we do not want to tamper with the river’s course. The approach road was deliberately made temporary with mud and other material for it to last it till the completion of the project.” He said the project would take two and half years to start and ruled out the possibility of a collapse of the approach road. However, in wake of massive erosion, he said that a new alternate approach road is being built close to the de-silting chambers area of the site.

“Red arrow  indicating to the construction of a new approach road near the de-silting chamber.”

Notably, these de-silting chambers were inundated by the flooding river during the flash flood. The area is still full of slush and remaining water brought by the river at the time. In such a situation, insiders are questioning the efficacy of this alternate road.

Ahirwar assured that the flash flood was an unprecedented event and its recurrence was highly unlikely.

The recklessness of the owners of the Rishi Ganga HPP and management of Vishnugad Tapovan HPP towards safety concerns came to the fore during the disaster and drew widespread censure. The former was razed to the ground while the latter was badly damaged during the devastation.

“A sense of disenchantment is deepening among labourers, who are working in inhospitable and unsafe conditions due to the management‘s callous attitude. They have not been paid their wages for a long time and vaccination against COVID-19 is due for most. Due to these reasons, workers have gone on multiple strikes, but each time they were persuaded to resume work with inane assurances,” a contractor told Newsclick on the condition of anonymity.

Ahirwal shifted the blame to contractors for the disenchantment brewing among workers. “The payment of some contractors who were not performing well is held back by NTPC time to time. This impacts workers as contractors pay the workers,” said Ahirwal. On the matter of vaccination, he said talks are proceeding with a hospital in Dehradun to provide a vaccination camp for the workers.

With Saturday being World Environment Day, there is only hope for the safety of local people and barrage structure as well as laborers working on it.