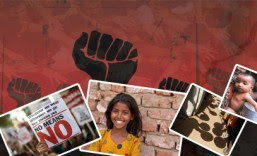 6 December 2013, Jamshedpur: We constituted a fact-finding committee at the request of the Jharkhand Krantikari Mazdoor Union (JKMU) to examine the extensive abuse of labour and democratic rights that the employees of Uranium Corporation of India Limited are faced with as also those who have been displaced and affected by the land acquisition by UCIL. In the course of our work we have read news reports and examined the records of the JKMU including court papers and judgments, tripartite agreements and employment and land acquisition papers as also documents relating to the environmental impact of UCILs operations in the region. We also met with the Deputy Commissioner – East Singhbum District, with employees of UCIL, including office-bearers of JKMU, and their families and residents of affected villages.

Based on the foregoing our findings are as follows:

1. There is an inadequate assessment of the environmental impact of UCIL’s operation in the region and its medium- and long-term effect on the local population. The impact in particular with regard to the disposal of low-grade ore and tailings and its effect on the quality of water, including ground water, appears to be untested.

2. 346 Workers at the Banduhurang mine have been illegally retrenched in July 2013 despite having been in employment since 2005. The retrenchment is illegal and the denial of reinstatement is both outside the spirit of the Industrial Disputes Act 1947 and judgments of the Hon’ble Supreme Court.

3. UCIL has unfairly dismissed Sagar Besra and Raju Kunkal both permanent employee at Turamdih mine who are also office-bearers of the JKMU- Turamdih unit without providing an opportunity for a free and fair inquiry. This dismissal is clearly aimed at sending a warning to the membership of the JKMU that has a growing membership in the Turamdih mine where its candidate won the canteen election with an overwhelming majority. Furthermore, Sagar Besra has emerged as a spokesperson for the affected peoples and a mediator between them and UCIL.

4. UCIL has also transferred 9 women employees, who are members of the JKMU, from the Turamdih Hospital to the Banduhurang mine despite the fact that employment of women in mining is prohibited under law.

5. The actions of UCIL with regard to its actions its employees amount to unfair labour practices. Despite various disputes in this regard being raised by the JMKU the Assistant Labour Commissioner (Central) Chaibasa has failed to act to protect the rights of workers within the spirit of the law.

6. Several office bearers of the JKMU have been charged with false criminal offences and have been arrested at various points in time. Despite the fact that even courts have held that some of these cases are without basis and proof, the attack on the democratic rights of the membership of the JKMU persists.

In view of the foregoing we call upon:

1. UCIL to address the various actions it has indulged in that are illegal and outside the law in recognition of its obligations of the Atomic Energy Act, 1962 and engage in collective bargaining with the JKMU in good faith.

2. The District Administration to ensure that:

(i) There is a rigorous assessment of the environmental impact of UCIL’s operations in the region including on ground water.

(i) The illegally retrenched workers of the Banduhurang mine are reinstated and paid wages for the period that they were denied work.

(ii) Action is taken against UCIL for indulging in unfair labour practices.

This fact-finding team shall complete its report and take it forward at all such forums that are appropriate.