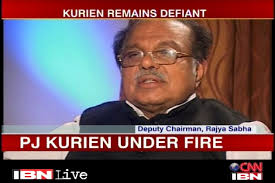 Bangalore, 17 Aug 2013: Women’s rights organizations, Human Rights organizations and concerned individuals strongly condemn the action of Ecumenical Christian Centre (ECC), which has failed in its duty, as one of premier institutions of learning on issues relating to Human Rights in the city, by giving space in their moment of celebration to Mr PJ Kurien, Deputy Chairman, Rajya Sabha, a man who is under the shadow of being involved in the infamous Suryanellie gangrape case.

We are deeply disturbed by ECC’s decision of inviting PJ Kurien and strongly condemn the action of ECC, and call for a public apology to be tendered by ECC.

Ecumenical Christian Centre which was established by Late Rev. Dr. M.A. Thomas with a radical vision of social justice and engaged religion is celebrating its Golden Jubilee. ECC, according to its blog “offers a forum for believers and non-believers alike to congregate and engage in dialogue on moral and ethical values and for social change and harmony.”(http://ecumenicalchristiancentre-iset.blogspot.in/)

It is therefore appalling that this organisation that states that it is committed to human rights has decided to invite as it guest of honour Mr PJ Kurien, who has been implicated in the Suryanellie case in Kerala where a 16-year old was repeatedly gang raped by a group of influential people.

While the Kerala Courts had acquitted him, the Supreme Court has directed a fresh opening of the case, as the SC felt that justice has not been done in this case.

ECC is known for the number of human rights training programs they hold regularly, it is unthinkable that ECC would not be aware of the status of this case.

“A 16-year-old Kerala school girl was brutally raped by 42 men for 45 days. Although her torture took place nearly 17 years ago, almost all the criminals are free. But finally, the Supreme Court has said that true justice has not been done and is demanding a fresh look at the case.

Since her abduction, the victim has consistently named Deputy Chairman P J Kurien as one of her attackers. The true facts have yet to be established. Until they are, Professor Kurien should stand aside to focus on his case – and let the Rajya Sabha focus on ending the rape epidemic across India. Instead, Professor Kurien’s decision to stay in post is fueling exactly the kind of outrageous anti-women statements that make rape more likely.

It’s no surprise that India’s leaders are failing to address the national rape crisis because so many of our law-makers themselves stand accused of rape and sexual assault. The Verma Committee demanded these politicians stand down until their case is heard, but no political party has yet agreed to this principled approach. Politicians fear that rape cases could be used to score political points, but the best way to be sure of the truth is to stand aside until justice has been done. Instead, all too often politicians remain in office to exercise power over police investigations of the allegations they face.”

Today when justice for victims of rape is the clamour of the day, we are disturbed that ECC chooses to be ignorant or silent about this and invite him to their prestigious function.

We register our strong protest against this decision of inviting PJ Kurien and we condemn boycott of ECC unless a public apology is tendered.