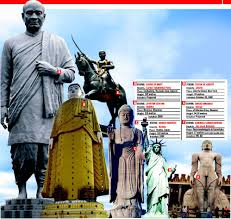 The work on a project that proposes to build the world’s largest statue in the form of ‘Statue of Unity’ near Sardar Sarovar Dam in the river downstream from the dam, just 3.2 km from the Shoolpaneshwar Sanctuary, in eco-sensitive zone and involving massive infrastructure (see annexure) has started work without legally mandatory environment clearance, environment and social impact assessment or any public consultation process.

This is clearly illegal, in violation of the Environment Protection Act, 1986 and EIA notification of September 2006 and a number of NGT and Court orders about such massive kind of construction on the riverbed. On 31 October 2013, the foundation stone was laid for the project amidst huge fanfare and media attention. Tenders have also been floated. Even the work for the Garudeshwar weir, proposed about 12 km downstream of the Sardar Sarovar Dam, began without any social or environmental impact assessment, public consultation and environmental clearance from the Environmental Sub Group (ESG) of Narmada Control Authority’s (NCA).

The website http://www.statueofunity.in/ clearly state the purpose of tourism and involvement of the ‘Sardar Vallabhbhai Patel Rashtriya Ekta Trust’ (SVPRET) to build ‘Statue of Unity’,  3.2 km downstream of the Sardar Sarovar Dam  inside the Narmada River on an islet called Sadhu bet.

“A 13km. long water body (pond) will create an excellent tourist spot with available infrastructure on both the banks.

The estimated cost of the project is more than Rs. 2,500/- corers (Rs 2063 crores is the cost of “DESIGN, ENGINEERING, PROCUREMENT CONSTRUCTION, OPERATION AND MAINTENANCE OF THE STATUE OF UNITY D/S of Sardar Sarovar Dam, Village Kevadia Ta. Nandod, District of Narmada Gujarat State, India” as per tender notice, see: http://www.statueofunity.in/tendernotice.html). The Government of Gujarat website (http://www.statueofunity.in/) clearly state that “A monument, that will not just be a mute memorial like the rest, but a fully functional, purpose-serving tribute that will boost tourism and facilitate development in the surrounding tribal areas” and will involve huge infrastructure as described in the Annexure downloaded from the official website.

The key issues that beg immediate scrutiny is as follows:

(1)   The project clearly needs environment clearance under the EIA notification of September 2006, but has not applied for or obtained the clearance at any stage.

(3)   The Project involves construction in the river bed and proposed reservoir, close to sanctuary in eco-sensitive zone, and hence will have serious impacts on the ecology and environment. Hence, and EIA and EC is crucial.

(4)   The project will affect the downstream river, its biodiversity, people and livelihoods and other related aspects.

(5)   A comprehensive assessment of the environmental and social impacts of the ‘Statue of Unity’ and its contribution to the cumulative impact of all the projects and activities in the area has not been done.

(6)   The project also needs public consultation, but none has happened so far.

(7)   During the construction of the Sardar Sarovar dam due to hard rock digging, the seismic area already carries the burden of artificial activity in the bed rock and added load in what is deemed geologically fault line area. Public reports on geotechnical and geological studies on the proposed site have raised issues of structural stability as well as safety. This cannot be taken casually by authorities. The seismic hazard analysis claimed to have been done by the Gujarat Government’s in-house “Institute of Seismological Research”(http://www.statueofunity.in/execution.html#sthash.jEBrofSN.dpuf) or the Geological and Geotechnical investigation commissioned to another government institute WAPCOS cannot be considered credible unless peer reviewed and put in public domain.

In view of the above facts on record, we demand that:

1.      Direct the Government of Gujarat to submit application for environment clearance and till that is obtained, not to do any work related to the project.

3.      Declare the action – of the foundation stone installation on 31 October 2013 for the project called ‘Statue of Unity’ – of the Chief Minister of Gujarat State as illegal, in violation of the EIA notification of September 2006 and the Environment Protection Act, 1986.

We will look forward to your urgent action and also point wise response.

Features of the project as per the following links:

Stepping UP TO BUILD HIGH. Stepping ahead to THE FUTURE.

The Statue of Unity will be a naturalistic and historically accurate representation of Sardar wearing characteristic garments in a walking pose.

The project would include:

The Statue of Unity Project will also include a unique museum and audio-visual department depicting the life and times of Sardar Vallabhbai Patel.

A Laser, Light and Sound show:

A Laser, Light and Sound show on the efforts of Unification of India.

A research centre dedicated to the research and development of subjects close to Sardar Vallabhbhai Patel’s heart like Good Governance and Agriculture Development. Here, subjects like Water Management and Tribal Development will also be studied and researched.

A heavy-load open lift with a panoramic view will be built alongside the Statue of Unity. Visitors will be able to rise up to the height of the structure’s head, walk into a viewing gallery and enjoy a panoramic view of the Sardar Sarovar Nigam project and the surrounding region from an astounding height of close to 400ft.

Refreshment areas like restaurants and recreational spots to make the project area an attractive tourist spot, thus facilitating tourism and employment for the surrounding tribal region.

Sardar Patel brought the nation together and this tribute, the Statue of Unity, will bring the country national pride. Plans will be laid for convention and training centres, development and formulation of tourism plan and provision of technical and managerial assistance for bids to invite EPC contract.

Digital India - Minister scales tree to make call seeking nurse for village
Health Activists Respond to PM Modi's Address on 14 April 2020- 7 things he must do #Lockdown2
Solapur - fights drought and water crisis , comes out a winner #mustshare
Why Every 'Nationalist' Indian Should Be Alarmed That The Fringe Is Creeping Into The Mainstream