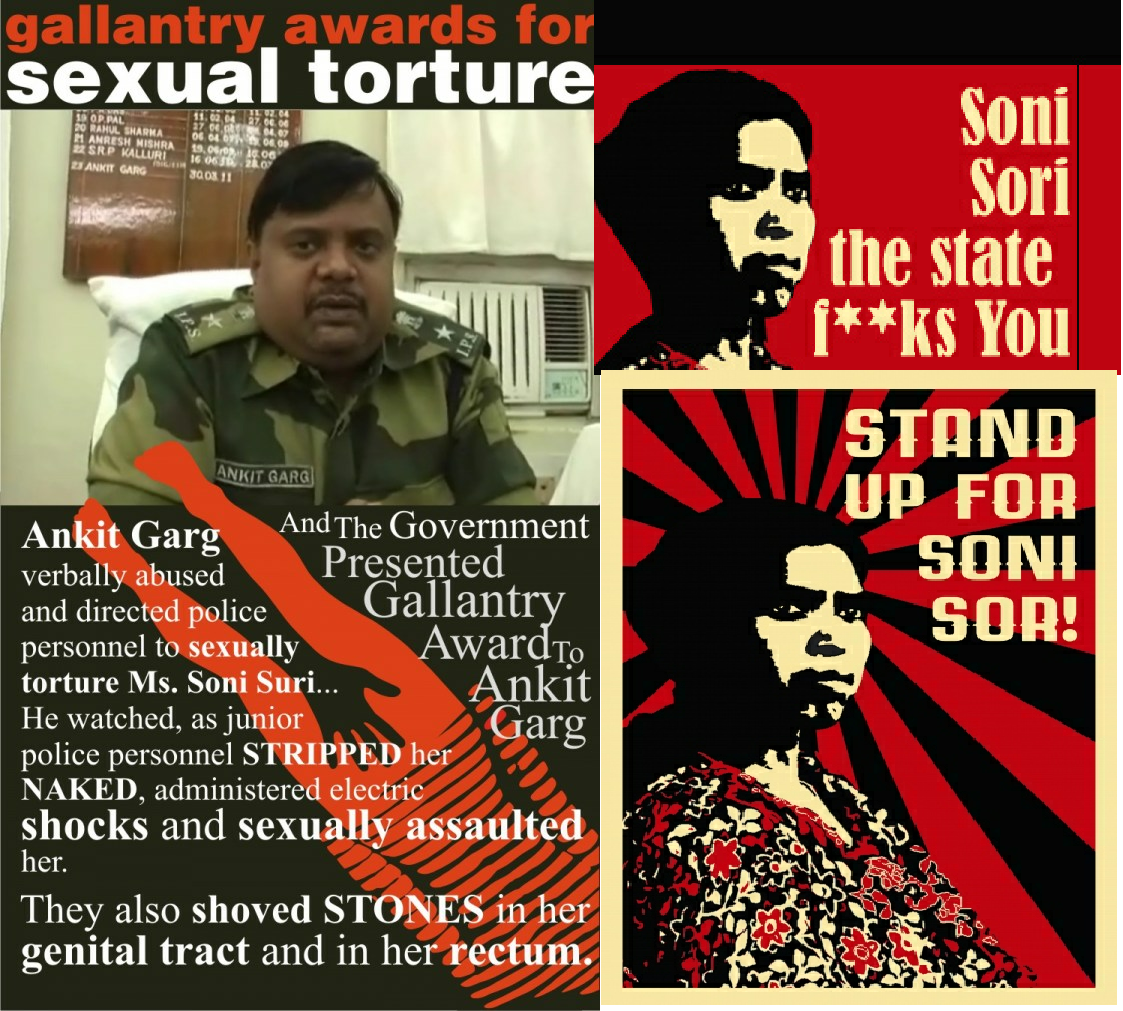 Criticizing the denial of interim bail to Soni Sori for performing the last rites for her husband Anil Putane who died last week, various organizations in Delhi issued a call for unconditional release of adivasi activists, Soni Sori and Lingaram Kodopi. “It is beyond belief that a judiciary could be so insensitive to deny even the basic humanitarian ground of bail for a few days to Soni Sori, to allow her to make arrangements for her three young children after the death of their father,” said Kalpana Mehta, convener of Women against Sexual Violence and State Repression.

Runu Charkraborty questioned this saying why Soni Sori was not given the opportunity to resettle her children and attend to the last rites of her husband when this favour is granted to many other convicts.

Soni Sori, an adivasi school teacher and her nephew, the journalist Lingaram Kodopi have both been in jail for over a year and a half now, awaiting trial for allegedly acting as conduits for the Essar company to give money to the Naxalites.  It must be remembered that the Essar company official, DVCS Verma and the Essar contractor, BK Lala, who allegedly made the money available to the Naxals and have in past dealt directly with them according to the police complaint, are out on bail, but the Chhattisgarh High Court has denied bail on similar grounds to Linga Kodopi and Soni Sori.  “If the police complaint in the Essar case is to be believed, then there is damning evidence of money being transferred from the Essar company to the Naxalites over a period of time, although the role of Soni and Linga is quite nebulous.  But the irony is that neither the Naxalites nor the Essar company individuals are currently in jail – only Linga and Soni, the so-called middlemen who neither gave the money, nor received this illegal transaction –are presently in jail,” said Amiy Shukla, Supreme Court advocate for Soni Sori. “This clearly shows the differing scales of justice for the adivasis and non-adivasis.”

Lingaram Kodopi, one of the few adivasi journalists from the conflict-affected part of Chhattisgarh had earned the ire of the local police in 2009 when he refused to become a Special Police Officer for them.  His aunt, Soni Sori, further incurred their wrath for being outspoken in her defence of Linga, and against other human rights violations in the on-going conflict.  While Linga fled to Delhi to escape police harassment, Soni Sori stuck it out in war-torn Dantewada and became the special target of police atrocities.  Not only did the Chhattisgarh police lodge six criminal cases against Soni Sori in 2010, they even arrested her husband Anil Futane in July 2010, seized his vehicle which was a source of income for the family, and foisted four different criminal cases against him.  Soni and Linga were later arrested in 2011 for the Essar case, even after a sting operation conducted by the investigative magazine Tehelka proved that the police had completely fabricated this case against Linga and Soni.

After spending almost three years in prison, Anil Futane suffered a massive paralytic stroke in April this year, just days before he was finally acquitted in the last of these cases on May 1st.  Although Anil had no history of any illness before his imprisonment, this stroke left him completely bed-ridden and immobile.  Unable to bear the cost of his treatment after he was released from jail, his family decided to bring him home from the government hospital in Raipur and his eldest daugther, all of 13 years old, was pulled out of school to tend to him in his sickness.  He passed away on August 1st.  The district court in Dantewada was moved immediately by Soni’s family seeking an interim bail for her on humanitarian grounds to enable her to attend the last rites of her husband and to be with her three young children in this traumatic period, but it was refused on grounds of the seriousness of charges against her.

It should be remembered that In addition to the Essar case, the Chhattisgarh police had also implicated Soni Sori in six other Naxalite cases and Linga Kodopi in one other Naxalite case.  Soni Sori has since been acquitted in 5 of these cases, and has been granted bail in the sixth.  Linga Kodopi has also been acquitted in the other case. “The remaining Essar case against them is also very weak,” explains Himanshu Kumar, a social activist from Dantewada, “but the trial will take years to get over.  Meanwhile, the Chhattisgarh High Court has denied them bail.  This only leaves the Supreme Court to undo this injustice, grant them bail and bring a modicum of justice to this family.”

The tragic part is that while all of them, Anil Futane, Soni Sori, and Linga Kodopi are innocent of the crimes they are charged with– the time it takes for them to prove their innocence before our courts is enough to reduce a perfectly happy and healthy family to a state of destitution and beggary. “Soni’s mother first passed away due to the shock of her daughter’s imprisonment, her father is also seriously ill, her husband who was imprisoned on her account is now dead, and her three young children are left to fend for themselves, while her own health condition is also quite precarious,” adds Himanshu Kumar. In addition to her continuing illness after facing severe torture and sexual violence in jail, it is now learned that Soni Sori is also suffering from severe anemia in jail.  She had to be given emergency blood transfusions in May as her hemoglobin levels dropped precariously to 5.4 gms.

“Anil Futane, Soni Sori and Linga Kodopi are just three of the many innocent persons jailed and put away for years in the conflict torn parts of Central India,” says Sanjeev Kumar of the Delhi Solidarity Group. “In addition to the release of Linga and Soni, we also demand a systematic review of the undertrials languishing in these overcrowded jails by an independent committee, and the immediate release of those found to be falsely implicated.”

“All our demands are falling on deaf ears. A large number of women’s organizations have asked for action against Ankit Garg who oversaw torture of Soni Sori in police custody . She was subjected to continual harrasment in jail and for every step from physical examination for injuries from torture to medical care Supreme Court had to intervene. But even now Chhattisgarh government continues to deprive her of basic human dignity and wants to take her around in shackles whether to the hospital or to her husband’s funeral. All this after she has been exonerated in all cases where a verdict has come through” said Savita Sharma of Saheli.