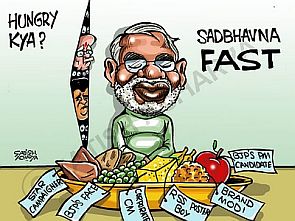 We, Anhad & other secular organisations, strongly believe that our democracy and secularism is directly under threat. The spectre of the country’s descent into fascism stares at us. The long reign of the UPA has not halted or arrested the march of the communal fascist forces; indeed there seems today to be a greater acceptance of ideas that we would call fascist. The strident demands for death penalty, the impatience with rule of law; the acceptability among the young urban people of a man as a potential Prime Minister, under whose watch minorities were systematically targeted, this desire for a strong authoritarian leader, all again point to the circulation and reception of fascist ideas.

There have been several riots at least since last year across the country. On the one hand, one sees local-level riots engineering machinery gearing up, and on the other the cleansing and anointing of Modi as the development man.

The rise in the power of the middle class via a corporate media, which aggressively pushes the agenda of ‘corruption-free efficiency’ – whose poster boy is Narendra Modi – at the cost of issues of social justice, secularism and democracy movements, is further pushing the Indian polity towards the Right.

Modi – is being projected nationally as a leader who is clean, charismatic and a visionary. An image of a new leader is being created by hired PR agencies and event management companies. The new leader is going to change the face of India and solve all problems. The facts show otherwise.

We are presenting the facts available with us below which clearly establish:

Modi announced huge projects for development of the host districts during his Sadbhavna Fast programmes. Many of the projects he announced were already part of the Municipal Corporation’s budget. Other projects like automation of solid waste management, recarpeting of roads, aforestation, fire brigade expansion, housing schemes for urban poor, the fund mainly comes from central government’s Jawaharlal Nehru National Urban Renewal Mission (JNNURM). The announcements like the beautification of Aji and Nyari dams on public-private partnership model were also ongoing projects. In Porbandar, Modi announced a Rs 281-crore package for three main projects of a new drinking water supply network, underground sewage pipeline and a housing scheme for the poor. All three projects have been going on for a while and are part of JNNURM.

So in effect Modi diverted huge amount of public funds to organize his Sadbhavna fasts and deprived people of their rights to these funds and on the other hand made a show by announcing projects which were either ongoing or were running on Central Government funds.

A compulsive liar, now, he is trying to fool the people of India.

According to the data available with us (detailed table attached, original supporting documents available on anhad website- details below)

We do not have any documents regarding other expenditure regarding food and a lot of other things- gifts, Chief Minister’s travel by helicopters etc.

If total expenditure is calculated it will be some mind boggling figure. Funds snatched away from poor, malnourished and under privileged people of Gujarat unconstitutionally for the whims and fancies of one individual.

As activists we have tried to expose his misdeeds. It requires a thorough investigation to unearth the full Sadbhavna Upvas expenditure including its illegality.

Anhad has today also launched a new website – secularstore.net and to compliment the Sadbhavna story we are releasing three short documentaries on the conditions of minorities in Gujarat along with this story.