The Koodankulam Nuclear Power Project (KKNPP) that took almost 18 months to begin commercial power generation from the ‘First Approach to Criticality’ (FAC) has taken hardly 18 days to develop a major snag and come to a complete shutdown. It has been reported that the reactor and the turbine at KKNPP Unit 1 stopped themselves due to technical problems in the switch yard. The Southern Regional Load Despatch Centre first mentioned “TRIPPED WHILE CHARGING GT#2 OF KKNP” as the reason for outage in its website that had happened on January 14, 2015 at 19:20:00 pm. While the Koodankulam authorities maintained that “nothing happened to the turbine or to the core,” the SRLDC announced the next day that “REACTOR & TURBINE GENERATOR TRIPPED.” 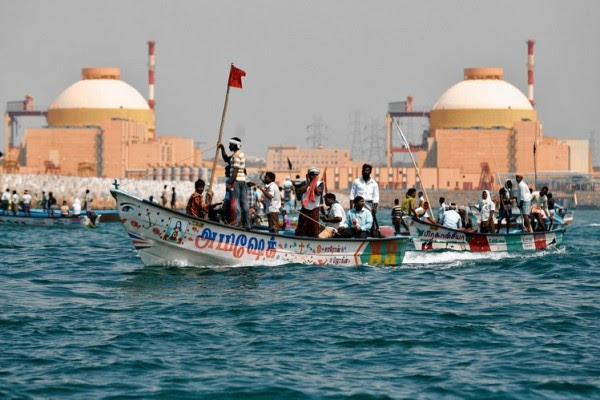 The allegedly best and the most perfect reactor in the whole wide world, certified repeatedly by Dr. Abdul Kalam, Mr. Alexander Kadakin, Mr. Vladimir Putin and a whole array of others is heading in a dangerous direction. It is pertinent to consider the colossal time overrun of some six years in making the first reactor go critical and in commissioning it. The Koodankulam authorities have been on a diesel buying spree from then on and have spent a whopping sum of some 35 crores on it so far.

Something is so rotten at the KKNPP. There have been serious problems from the project’s very conception. The Indian authorities and the Russian authorities had a major conflict over the exact site to set up the reactor. The visiting Russians opposed the Indian team’s unilateral shifting of the site and decided not to go ahead with that plan. The Indian team somehow managed to convince the Russians and this scuffle was widely reported then in the vernacular press here in Tamil Nadu.

The discredited Russian companies such as the Zio-Podolsk, InformTech and Ishorsky Zavody supplied shoddy and substandard equipment and parts in a non-sequential manner and delayed the project considerably. There have been alleged financial irregularities in all these purchases and procurements, and in the civil construction of the plant. It was not planned and built like a world-class nuclear power plant but as a municipal crematorium with so much adhocism and so many unqualified and corrupt contractors and subcontractors. To make matters even worse, the Indian nuclear authorities fiddled with the reactor and other safety components allegedly for providing additional safety and alienated the Russians even more.

A shadow boxing between the Russians and the Indians has been going on all along. Even as the technical tussle went on behind the screen from the very beginning of the Koodankulam project, the bilateral political and diplomatic hand-wrenching was taking place for more reactor sales. The erstwhile Manmohan Singh government, some Congress party leaders and some officials of the Department of Atomic Energy (DAE), the Nuclear Power Corporation of India Limited (NPCIL) and the Atomic Energy Regulatory Board (AERB) together were hiding many perilous skeletons in the corrupt atomic energy closets.

If the Modi government were to institute an inquiry and question a few individuals such as Dr. Manmohan Singh, Mr. V. Narayanaswami, Mr. Alexander Kadakin, Dr. M. R. Srinivasan, Mr. S. K. Jain, Mr. Kasinath Balaji and a few others who had something to do with the Koodankulam project, India would come to know many shocking facts and startling revelations.

Being a status-quoist government run by a crony capitalist party that is propped up by a Bomb-loving parivar, the Modi sarkar would never order an inquiry into the Koodankulam project. In fact, they are desperately trying to hide all the commissions and the omissions of the establishmentarians and to protect the corrupt and inefficient folks in the broader interests of national security, financial security, energy security, military security and the like. The Indian elites would rather jeopardize the interests of a few crores of Tamils than give up on their sexy and lustrous Nuclear Taj Mahal dream.

The political class in Tamil Nadu, especially the two big parties in the state, the DMK and the AIADMK, maintain a stoic silence about the Koodankulam project and the overall dangers the Tamil people face because of the benefits they may have obtained or for the fear of antagonizing the Delhi rulers and hurting themselves in all the ongoing corruption cases.

Most of the important political leaders, bureaucrats, technocrats, businessmen and everyone with some access to information and some knowledge of the decision-making processes in the power corridors in India know full well that the Koodankulam nuclear power project is not 100 percent safe and sound. Many conscientious media leaders and presspersons also publicly acknowledge this. As a matter of fact, the Koodankulam project is believed to be extremely accident-prone and utterly unsafe.

We, the struggling fisherfolk, farmers, merchants, housewives and children, are completely helpless in this high power and big money game that the rich and famous and powerful play. Our nonviolent democratic peaceful protest continues and will persist until the Truth about the project is brought out someday soon.