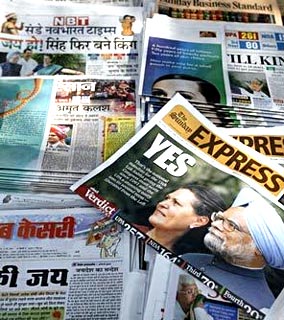 The Delhi Union of Journalists in a statement has said that hundreds of journalists in the capital have been
thrown on the roads and many veterans have to work virtually 24×7 in total violation
of the Working Journalists Act. At a meeting of the DUJ office bearers and
national council members reports were heard of the attempted snap closure of
three  magazines of the Outlook group —  Marie Claire, Geo and People — putting the
jobs of around 135 employees in jeopardy.

An interim report placed before
office bearers pointed out that virtual jungle law was prevailing in newspaper
establishments from print to TV all over the country which was now having more
than trickle down effect in Delhi – affecting not only journalists but press
workers also.

The DUJ has made it clear that it
is shocked to find that more than half a dozen workers illegally dismissed have
died due to starvation in the past three years, despite court orders calling
for their reinstatement which are being continuously challenged. It has noted
that even court orders calling for their reinstatement have been given the go by
effecting divisions between the to be retired employees and those not to be
retired as of now. A three person enquiry committee has been constituted by the
DUJ to go into the issue of increasing cases of unfair labour practices in the
newspaper industry in the capital.

The DUJ has called for immediate
inspection of premises of the guilty newspaper offices as per Sec. 17(b) of the
Working Journalists Act. Calling for a uniform retirement age in the newspaper
industry of 65, the DUJ opined that one-third of wage board employees in the
capital were retired or shunted out during the pendency of wage board
proceedings, while many others were coerced into contracts under humiliating
terms. There are three types of contracts, the DUJ said – coercive contracts,
contracts against permanent vacancies and contracts to circumvent the wage
board and reduce journalism to contracts of bondage which were an infringement
on the freedom of the press and on the right to association.
The DUJ has welcomed the judgment
by the Labour Court in the Mumbai which has asked the Outlook group to maintain
status quo. It has also welcomed a recent judgement from Kerala on a similar
issue.