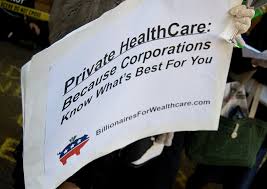 In 2009 Oxfam published “Blind Optimism: Challenging the Myths about Private Health Care in Poor Countries,” to help redress what we saw as an international health discourse increasingly dominated by unchallenged private sector advocates.  Some of those same advocates accused Oxfam of being purposefully selective with the evidence.

The health team at Oxfam were therefore very pleased to see the recent publication of a thorough and balanced independent appraisal of peer-reviewed evidence on this topic in PloS Medicine. The study supports many (not all) of our conclusions about both the public and private sector.

In their research Basu et al. assess the comparative performance of the private and public sectors in health across a range of health system performance areas. They are clear that comparative evidence is often lacking and that distinctions between what is public and private are often difficult (for example when public facilities act more like commercial operators by charging fees). With these limitations acknowledged, the authors’ own conclusion states:

‘Studies evaluated in this systematic review do not support the claim that the private sector is usually more efficient, accountable, or medically effective than the public sector; however, the public sector appears frequently to lack timeliness and hospitality towards patients’.

Like Oxfam, the authors of this comparative study make special note of the World Bank as an influential advocate of public-private partnerships in health, but one whose claims are often unsubstantiated by their own data. The authors raise concerns about a conflict of interest for the World Bank that may undermine the validity of their research and analysis on this topic.

Some highlights from the paper are listed below (though I recommend reading this important article in full – especially for interesting country examples):

And on the World Bank….

The evidence from this study shows that while public health systems are often weak and under-resourced they still deliver better quality of care, more equitably and with greater efficiency than the private sector.  The study highlights the tendencies of private providers to serve higher socio-economic groups, have higher risk of low-quality care, create perverse incentives for unnecessary testing and treatment, and suffer from weak regulation. It also suggests there are a number of ways public health systems can do better.  They must be more responsive to patients and more accountable to citizens, improve systems for distributing essential inputs like medicines, and address financial barriers to accessing care (such as formal and informal fees).

These are legitimate challenges that deserve thoughtful attention and action, but they should not be used as evidence of the superiority of private sector approaches. Instead, the policy response to these findings should be very clear: far more effort and resources must be mobilized to maximize the clear advantages of public health systems, rather than further starving them of the resources and support they need to deliver equitable and quality health care for all.