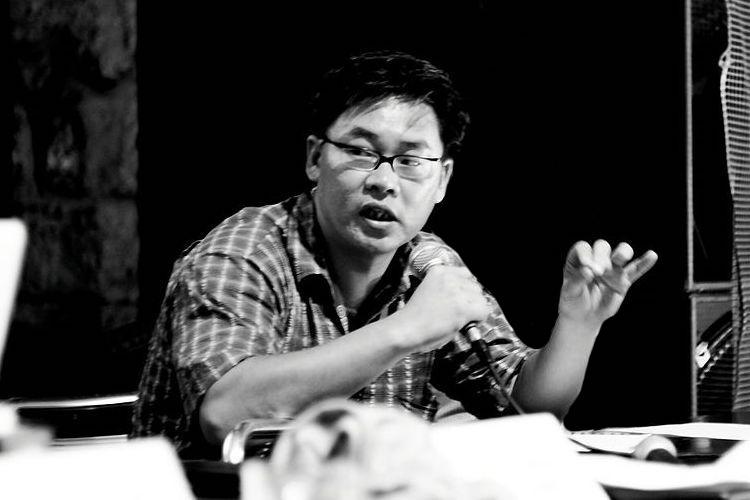 In a statement  Lawrence Liang said that he will contest the report, but the survivor says tougher action should be taken against him.

Prof Lawrence Liang, Dean of the Law faculty at Ambedkar University Delhi, has been found guilty of sexual harassment by an internal committee. Photo: Wikimedia Commons

Raya Sarkar’s crowdsourced list of sexual harassers in the academia in October 2017 stirred up quite the storm. It named several prominent academics, including Partha Chatterjee, Sadanand Menon and Lawrence Liang. While very few academics named in the list faced official investigation, a probe initiated by the Committee for Prevention of Sexual Harassment (CPSH) of the Ambedkar University, Delhi (AUD), has found Lawrence Liang guilty of sexual harassment.

Apart from stripping Lawrence of his administrative position, the committee also issued a warning letter to him stating that any future complaint of sexual harassment against him would have “serious consequences”, which may include suspension. He would also have to undergo a course on sexual harassment at the workplace and would have to give a formal undertaking that he has read and understood the AUD sexual harassment policy and would adhere to it.

The order has snippets of WhatsApp conversations between the survivor and Lawrence. There is, however, no mention of any compensation for the survivor, for the emotional trauma and financial resources she had to put into the case.

The report and its recommendations came to light after a copy of the final report of the CPSH was circulated online. The report, however, did not name the defendant (Liang), the survivor or any of the other witnesses. TNM is also in possession of the survivor’s response to the report, in which she called the ‘punishment’ for Liang ‘inadequate’.

A statement provided by Liang, however, confirms the veracity of the report being circulated online. In a statement to TNM, Liang said, “The Committee for Prevention of Sexual Harassment (CPSH) at Ambedkar University Delhi (AUD) has conducted proceedings in which I was the defendant. The CPSH has given a report and made certain recommendations. This is only one part of the process provided by the CPSH rules. Those rules provide that both/either party can appeal the recommendations. I informed the CPSH and AUD of my intention to appeal immediately on receipt of the report.”

TNM also reached out to AUD for further comments. However, Geetha Venkataraman, the head of the Committee for Prevention of Sexual Harassment (CPSH), said that as per the confidentiality clause in AUD’s ‘Policy On Prevention, Prohibition And Redressal Of Sexual Harassment And Discrimination Based On Gender Identity And Sexual Orientation’, she could not comment on the case.

The case against Lawrence Liang

TNM has a copy of the CPSH order, which only refers to Lawrence Liang as ‘D’, and Ned Bertz, another faculty member accused of sexual harassment by the same woman, as ‘Z’. The woman harassed by Lawrence is referred to as ‘C’ in the CPSH’s report. She will be referred to as Sheetal* here (not her real name).

Sheetal says she was harassed multiple times by Lawrence between 2015 and 2016.  Both Sheetal and Lawrence were completing their doctorates at a University in Delhi at the time, and Lawrence would visit Delhi for various talks and seminars. Lawrence advised her on her PhD over email and in person.

Sheetal said that in 2015, he forcibly kissed and molested her twice. The first time was in an auto-rickshaw when they were returning from an informal dinner and the second time was in a room Lawrence was staying in, when Sheetal’s friend had stepped out. There were also “unwelcome text messages” Lawrence sent to Sheetal at a conference venue.

Sheetal said that in 2016, Lawrence forcibly kissed her when he was dropping her back home after a group dinner. Previously, he had also hugged her and kissed her in greeting in public in a way which made her feel uncomfortable.

A few months later, Sheetal learnt that Lawrence had similarly sexually harassed other women as well. After his name featured in the Raya Sarkar list, and several academics defended him citing the absence of ‘due process’, she filed a complaint against him with AUD’s CPSH.

She also filed a sexual harassment complaint against another professor from an American University, who was a visiting faculty at AUD. This man has been identified as Ned Bertz.

Sheetal also had a witness backing her. Referred to as ‘CW’ in the CPSH report, she is Lawrence’s ex-colleague from a Bengaluru-based organisation Lawrence co-founded, believed to be the Alternative Law Forum (ALF). The report also refers to his alleged harassment of two other women interns at ALF.

Lawrence defended his actions by stating that although his actions can be seen technically as sexual harassment, the policies and laws defined it in a black and white manner which did not accommodate complexities of actual interpersonal interactions.

However, the Committee noted, “Forms of gender violence and harassment are often identified as such not at the time of their occurrence; it is common for these to be seen through new lenses as new frameworks of, for example, feminist understanding, are gained. […] when the harassed/violated learns that there is a pattern to such non-consensual behaviour of the harasser, then the benefit of doubt given or grace granted is then withdrawn. Thus, it is perfectly understandable that C may have once not read a particular incident as violating […] but later changed her mind. Thus, for the IC, the complaint is not the moral judgment of the number of sexual relationships that D may have had but an ethical judgment on the basis of the number of sexually violating behaviours D had committed in C’s understanding.”

The CPSH found Lawrence guilty, but the action taken against him has not satisfied Sheetal. According to her response to the CPSH report, relayed to us through her friends, not only does she find the disciplinary actions taken against Lawrence “inadequate”, she also feels deprived of access to substantive and restorative justice, which would help her heal from the trauma of “repeat sexual assaults”.

She alleges that Lawrence continues to use his influence and had written to the University VC asking for the Committee’s report convicting him not be handed over to her. She says that the confidentiality clause has been misused to prevent her from getting access to transcripts of her deposition in verbatim.

“This along with comments, such as, the committee is in no way obliged to listen to what I have to say once the report has been prepared (meaning, inquiry closed), because then would also have to entertain the queries of the defendant. This makes little sense because it means that the committee continues to treat the convicted individual at par with the victim,” Sheetal says in her response.

She also argues that while the Committee has taken steps to ensure rehabilitation of the perpetrator, no such provisions have been extended to her, including monetary compensation from the person found guilty.

“No steps have been taken, or no recommendations have been made to ensure or facilitate my well-being or compensate for the loss of health or mental health caused due to the assault/sexual harassment that I have suffered in the hands of my perpetrator,” she rues.

Sheetal has asked for the Committee to reconvene and make required recommendations for her compensation and rehabilitation.

Meanwhile, Lawrence too refuses to back down. In his statement, he says, “I have not commented so far on the matter because of CPSH confidentiality rules. I can, and must, however, say this – I dispute the report in its entirety, its findings and recommendations included.”

“Some persons have initiated selective leaks. These persons know that I have signed confidentiality rules and cannot respond. Selective leaks demonize, cause a media trial, and proclaim guilt in advance. I am passionately committed to AUD, and have worked hard to build the School that I am a part of, and I intend to exhaust every channel open to me to clear my name,” he say