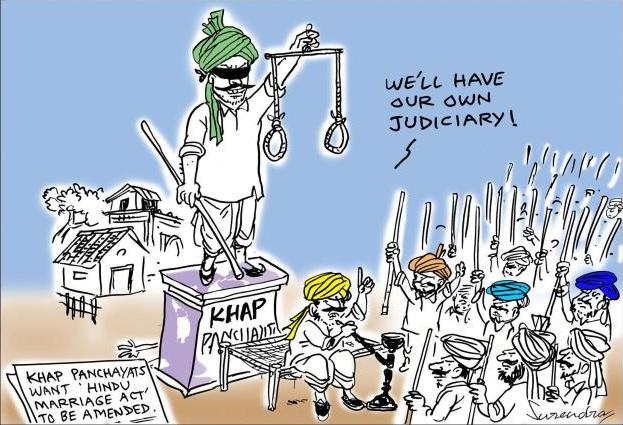 In a first, a Khap Panchayat in a small village called ‘Irony’ reworked their policies concerning honour killings of local women.

“We believe that women should be empowered and should not be killed for being women; we also agree that we have made some mistakes in the past, and we now take this opportunity to progressively align ourselves with the Hon’ble PMs beliefs on women empowerment” said the panchayat chief.

Sources tell us that these new guidelines will add one additional step in the process of honour killings. From now on, before a woman is honour killed, she would undergo an official name change and would be renamed after an anti-national. With huge public support on the new policy, the process kicked off to a speedy start.

In the four days of the new policy, 4 Kunals, 3 Swaras and 25 Ravishes have been honour killed, therefore, totalling 32 anti-national deaths and ‘zero’ patriarchal ones.

“Our chief was always a progressive man, he even let his daughter cook western food, every once in a while; he believes women should be allowed to cook what they want, even if its western.

Naturally, he took a lot of heat initially for this by the entire village, until of-course everyone tasted the burgers.”, said a passionate supporter.

We also spoke to a permanent honour killing contractor, for his views on the rebranding and whether it contradicted with the beliefs. “People have always misunderstood us. While it will be painful to let go of killing women for no reason, on a brighter side, now we get to kill many more anti-nationals.

Besides, there’s a very thin line between being a sexist and being patriotic.” He said snorting that line off the table.