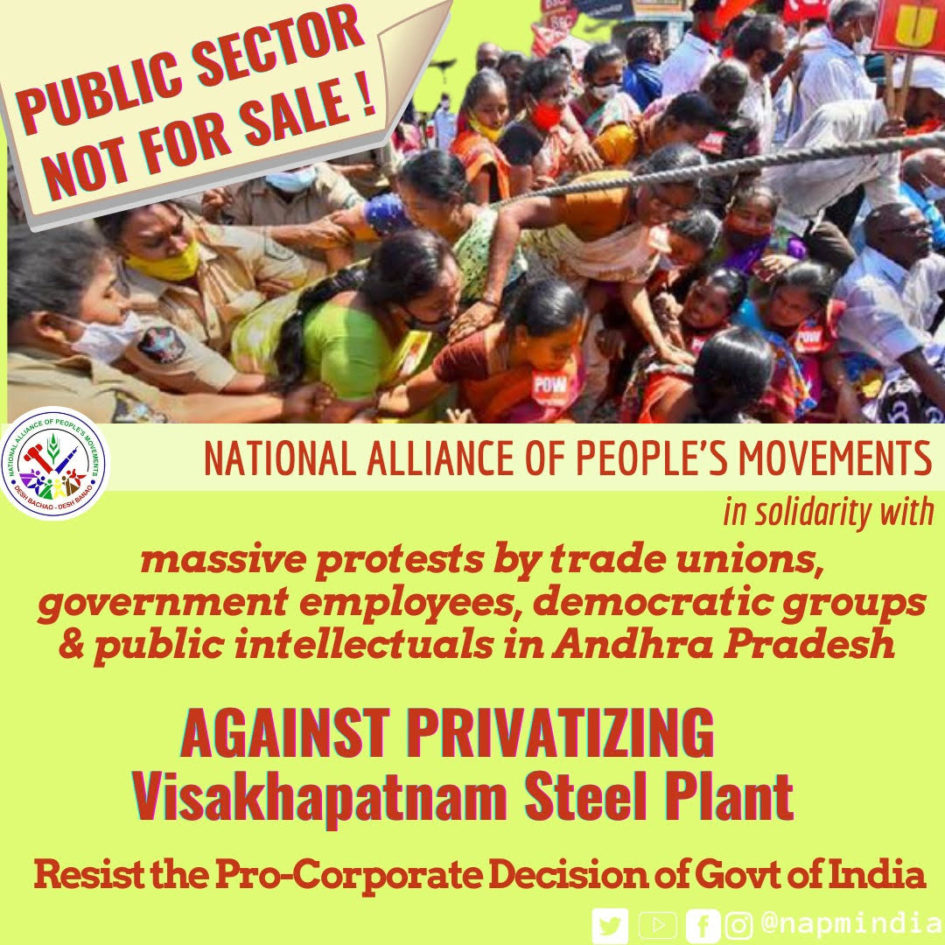 25th Feb, 2021: National Alliance of People’s Movements (NAPM) stands in solidarity with the employees and workers of Rashtriya Ispat Nigam Ltd (RINL), commonly known as Visakhapatnam Steel Plant (VSP) in their ongoing protests against the Central Government’s corporate-friendly decision to privatise the plant, misleadingly termed ‘disinvestment’. Over the past few weeks, the struggle has received wide-spread support from all sections of society in Visakhapatnam and across Andhra Pradesh including from trade unions, government employees, democratic groups, intellectuals and some political parties.

Spread over 22,000 acres of land, VSP has aggregate assets worth over 2 lakh crore rupees. The plant employs 15,000 permanent and 20,000 contractual workers. Additionally, it employs 65,000 people indirectly, thus providing livelihood to over one lakh people. The recent decision of the Union Cabinet, which approved in principle 100 % disinvestment in RINL, will have brutal ramifications over the 1 lakh workers. In effect, this means selling off to private players the nation’s first shore-based integrated steel plant, established after significant struggle and sacrifice of the people.

Almost 5 decades back, in 1977, the steel plant was established during the time of the then Prime Minister Indira Gandhi, after prolonged struggle and agitations. Back then, the slogan “Visakha ukku-Andhrula hakku” (Vizag Steel is Andhra’s right) resonated as workers, intellectuals, freedom fighters demanded the establishment of the plant. The intense struggle during the 60s saw 32 deaths, including many due to brutal police firings. These deaths, as well as the 44 villages evacuated to allow for the plant, are sacrifices the people made in the building of a strategic asset for the nation.

While the reasons invoked for privatizing VSP are the losses it incurs, it is worth noting that the Central Government has barely invested in the steel plant, even though it has a 100% stake in it. In the decades since its establishment and particularly, post 90s, neo-liberal state policy has only increased the production costs of the plant.

Despite being a massive public sector undertaking, VSP was not allotted captive iron ore mines, which the government does not shy away from allotting to mega private sector players such as Tata, Mittal and Adani. Consequently, the plant is forced to spend Rs 1,500 to 2,000 crores annually to procure raw material. Reports indicate that due to non-availability of captive mines, VSP incurs costs almost 5 to 6 times higher to mine and process every tonne of ore. The plant also faces other high input costs such as high freight costs, industrial power tariffs etc, which will not be resolved by privatizing.

Moreover, delays in construction in the initial stages led to incurring significant losses on loans, which were only addressed through a restructuring package in 2000. From 2001 to 2016, the plant earned profits. In spite of the clear negligence of successive governments, which has caused a great burden to the operations of VSP, the plant has shown good performance over the years and has also started modernization and capacity expansion, in 2016. As a result of the Centre not providing any funds for the expansion of the plant, VSP was once again forced to incur debt for it. That the plant has managed to survive with some satisfactory output, despite all bottlenecks is testament to the fact that, with adequate state support, PSUs can thrive and cater to public interest and state exchequer.

It is no secret that the privatization of VSP is part of an established trend in the working of the BJP-led Govt of India wherein public entities are sold off to self-serving private players, ensuring the latter’s interests at the expense of the people. This nexus between the Modi Government and the corporate elite comes at a time when the government is trying to push its agenda of ‘Atmanirbhar Bharat’ and is relinquishing all responsibility towards the Indian public and public sector. Despite analyses showing that this is an ill-advised move towards economic recovery in the current pandemic conditions, the Govt continues to sell such public assets to the ‘highest bidder’.

NAPM condemns the gross negligence of the Central government towards VSP and the callousness in further sacrificing the lives and livelihoods of the more than 1 lakh people dependent on it.

We call upon the Govt. of India to immediately:

·      Withdraw its arbitrary and anti-people decision to privatize the Visakhapatnam Steel Plant.

·      Safeguard livelihoods and ensure employment guarantee of all the 1 lakh workers.

·      Allocate adequate captive mines to the plant, in order to reduce production costs.

We look forward to a strong resolution in the Andhra Pradesh Assembly against the privatization, as announced by the State Cabinet. In true federal spirit, the Centre must respect such a resolution and the appeal by the Chief Minister to the Prime Minister to not privatize RINL.

We also call upon the state government to restrain from use of any form of force against the striking employees and peaceful protestors.

India - Dalit woman gives birth in hospital toilet #WTFnews
World's first IT campus for persons with disabilities to come up in Hyderabad #WordlDisabilityDay
Who controls NDTV? No, its not the Roys
#India - Why is mainstream media silent on the ( IL)LEGALITY of #UID #Aadhaar