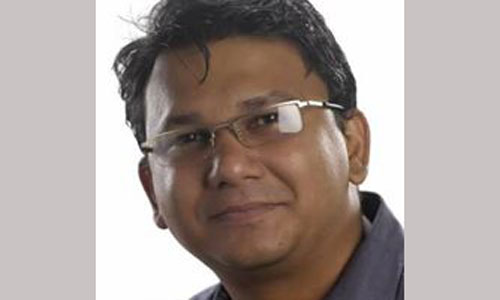 Dhaka: A Bangladeshi publisher, who worked with slain atheist writer and blogger Avijit Roy, was on Sunday hacked to death by unidentified assailants here, shortly after two secular bloggers and another publisher of Roy were attacked in a separate incident.

Faisal Arefin Dipan, 43, was killed in his third-floor office in central Dhaka locality of Shabagh, very near the venue of months of demonstrations demanding capital punishment for Jamaat-e-Islami leaders and other fundamentalists who had collaborated with Pakistani troops during Bangladesh’s liberation war in 1971.

“Dipan died of stab wounds on the shoulder,” Muntasirul Islam, spokesperson of Dhaka Metropolitan Police (DMP), said.Bangladesh police headquarters spokesman Nazrul Islam told PTI that Dipan was slaughtered and he died instantly.
Dipan’s father Abul Kashem Fazlul Haq, himself a noted intellectual and writer, said “I saw him (Ripan) lying upside down in a pool of blood. He is dead.”
He said those who opposed free speech were behind his son’s murder. Witnesses said sound of firing was also heard from the supermarket. The killing of Dipan came just hours after unidentified assailants attacked two secular writers and another publisher of US national Roy’s books, leaving one of them in a critical condition, according to police.
There was a common pattern in the both the attacks today with the perpetrators locking the victims inside their offices before carrying out the crimes.
Roy was hacked to death near a book fair here on February 26 this year, the first in a series of attacks this year that have targeted atheist and secular bloggers in Bangladesh, leaving five dead.

Dipan owns Jagritee Prakasany (Publishers) whose office is located at Aziz Supermarket. Dipan’s father told journalists after the murder that those who have targeted those promoting free speech might be behind the attack.

The attack on Dipan came on a day when Ahmedur Rashid Tutul, another publisher of Roy’s books, was also hacked by unidentified persons at his office in Lalmatia locality at around 2:30 pm.
Dipan was working in our office on the second floor of this building, said Alauddin, manager of Jagriti Prokashony who was working in the other office of the publishing firm on the first floor of the same building, said.

As Dipan did not respond to Alauddin’s phone calls, the latter went up to the second floor found him lying there in a pool of blood, he said.
On being informed, police took Dipan to Dhaka Medical College Hospital where doctors declared him dead, Muntasirul Islam said.