PUNE: The civic body’s health department on Friday ordered an inquiry into the alleged medical negligence that led to the death of a pregnant woman late on Thursday night.
The 20-year-old woman, a resident of Vishrantwadi, had an episode of convulsion at home and was rushed to the Pune Municipal Corporation (PMC)’s Rajiv Gandhi Hospital in Yerawada. But she did not get any treatment because there was no medical officer. 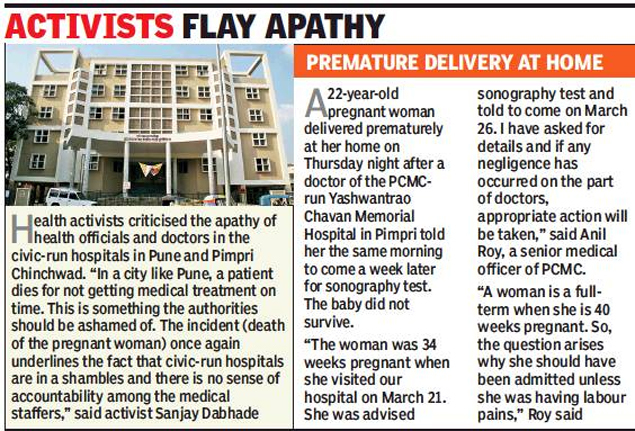 The nurses moved her to the state-run Sassoon General Hospital in an ambulance, where she succumbed to complications soon after. Doctors could not even save her child. Corporator Ashwini Landge filed a complaint of medical negligence with the PMC’s health department, following which the probe was ordered.

“We shall initiate strict action against the erring doctor. So far we have learnt that the doctor supposed to be present at the time when the woman was taken to the hospital had gone to have food. But we have to verify and find the truth,” explained Anjali Sabne, assistant medical officer of health (AMoH), PMC.

There are four doctors at the Rajiv Gandhi Hospital. They carry out their duties between 9am and 5pm. Thereafter, the duty of a resident doctor begins. He is supposed to stay in the official quarters on the hospital premises.

“The woman was our registered patient. After confirmation of the pregnancy, she had enrolled herself for antenatal care (ANC). She was 36 weeks pregnant at the time of the death,” said another PMC official.

A doctor of Sassoon General Hospital said, “The woman’s condition had deteriorated by the time she was rushed here. Despite putting in all efforts, neither she nor her unborn child could be saved.”