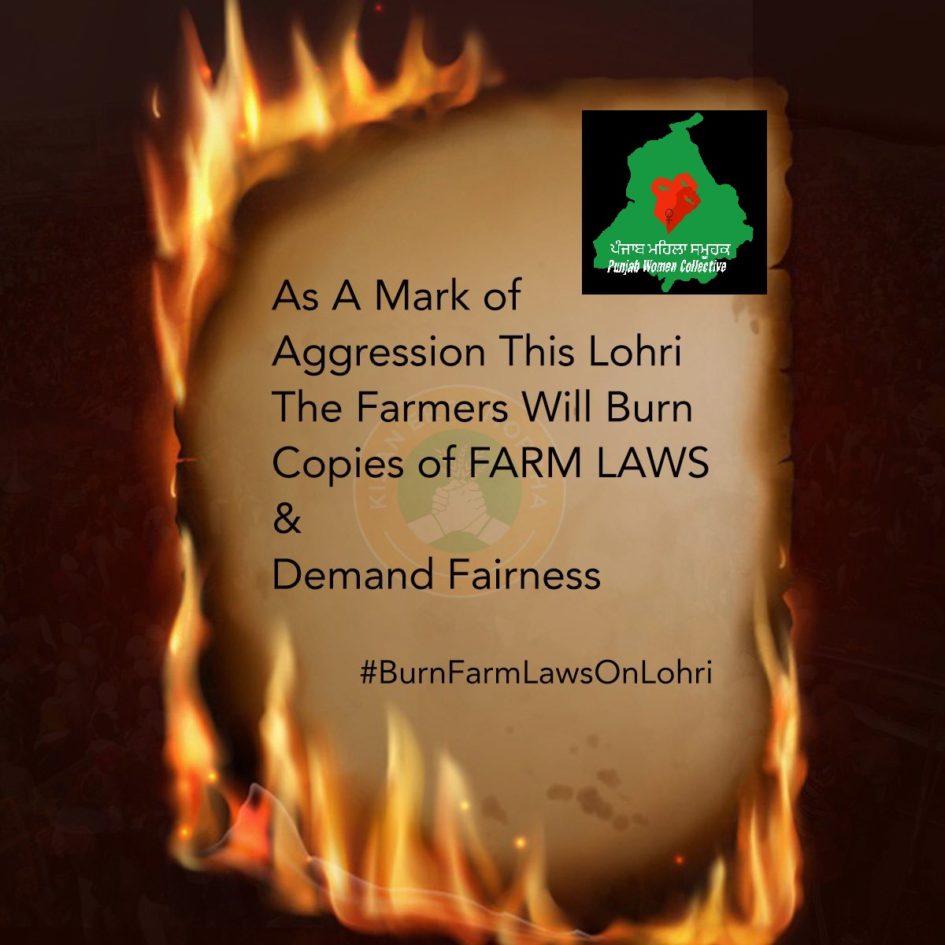 “We burnt the copies of the farm laws as a mark of protest against these legislations,” said committee’s general secretary Sarwan Singh Pandher in Amritsar.

Farmers in Punjab on Wednesday burnt copies of the Centre’s three new farm laws at several places on Lohri as a mark of protest against the legislations.

The harvest festival of Lohri is celebrated in Punjab, Haryana and other parts of north India. Bonfires are an important part of the festivities.

Protesting farmers owing allegiance to different farm bodies held protest at many places in the state and burnt copies of new agriculture laws.

Farmers also shouted slogans against the BJP-led Centre and slammed the government for not acceding to their demands. They demanded that the new farms laws should be repealed.

Farmers including women under the banner of Kisan Mazdoor Sangharsh Committee held a protest at Pandherkalan village in Amritsar.

“We burnt the copies of the farm laws as a mark of protest against these legislations,” said committee’s general secretary Sarwan Singh Pandher in Amritsar.

Similar protests are also being held at other places in Amritsar.ADVERTISING

“Until the Centre accepts all the demands of farmers, our agitation will continue,” said Mr Pandher.

“We will not accept these farm laws as they are not in the interest of the farming community and the government should repeal these legislations,” said a protester.

Farmers also burnt copies of the new farm laws at many places including Hoshiarpur, Sangrur and Kapurthala in the state.

Farmers, who have been camping at the Delhi borders, are demanding a repeal of the farm laws and a legal guarantee to the minimum support price for crops.

The Supreme Court on Tuesday had stayed the implementation of controversial new farm laws till further orders and decided to set up a 4-member committee to resolve the impasse between the Centre and farmers’ unions protesting at Delhi borders.

U.P has no Ambulance for humans . but deploys ambulances for cows #WTFnews
"No ambulance for pregnant women without #Aadhaar", say MNREGA Workers from Madhya Pradesh
#India - Do you know what is the cost of UID ? and who Benefits ? #Aadhaar
SC orders medical test of Justice Karnan, next hearing on May 9