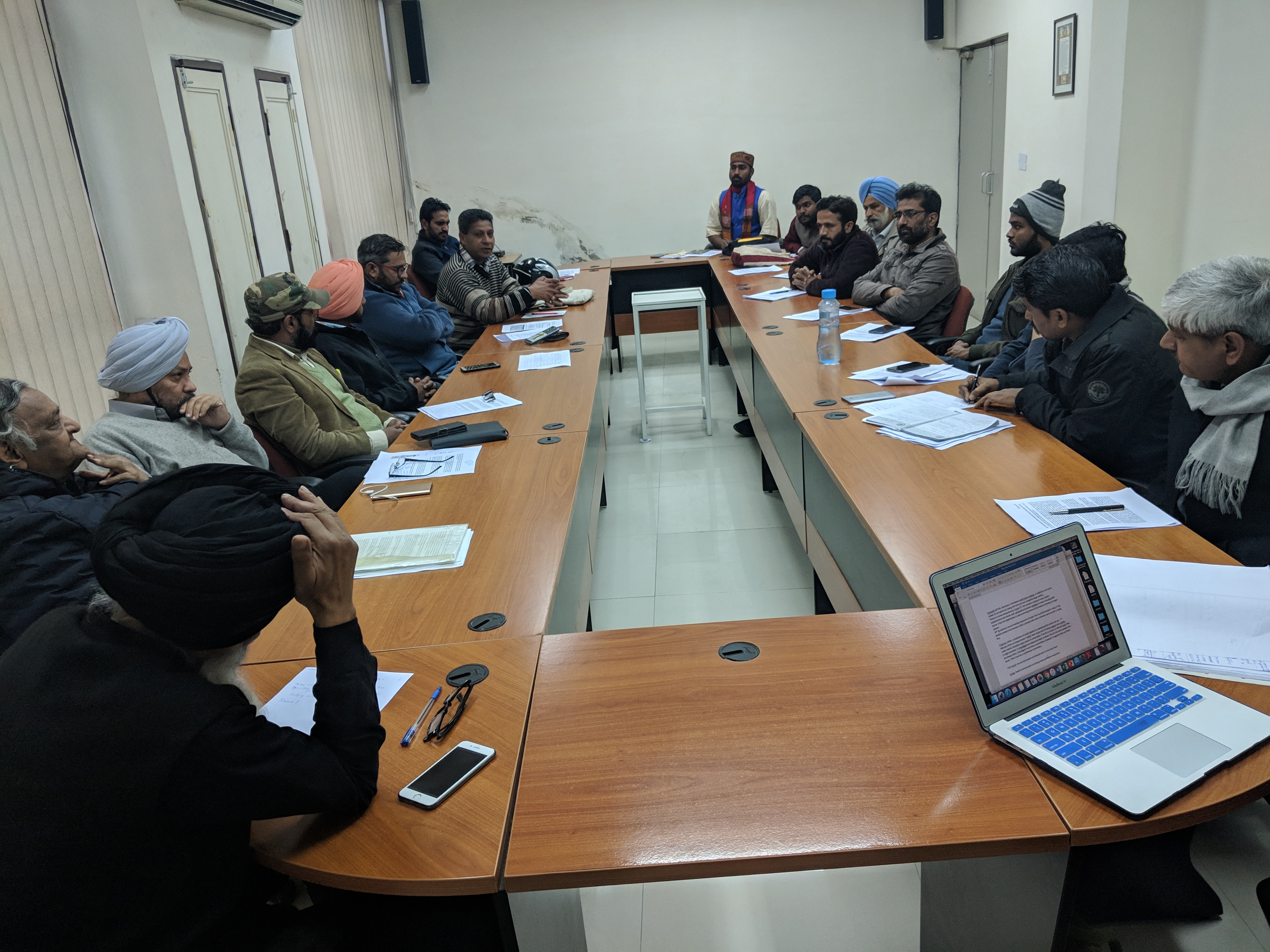 Today, representatives of various people’s organisations and other medical doctors, public health experts, researchers, professors and other social activists from Punjab & Chandigarh and other parts of the country met to discuss recent move to privatize health and education in Punjab and Chandigarh. The campaign was formed in response to the public notice issued by the Punjab Health Department on 20th January 2019 inviting private entities to bid to run primary healthcare facilities in Punjab. Similarly, the Chandigarh administration announced today, on 30th January 2019, that they are going to hand over government schools to for profit private players.

The meeting began with Dr. Pyare Lal Garg, Jan Swasthya Abhiyan began the meeting by outlining corruption and misgovernance of health services in Punjab. He mentioned that that after two failed attempts in 2011 and 2015, the government has now again moved to hand over public health services to profit making private entities.

Professor Manjit Singh, educationist highlighted that such handing over is happening not just in health sector, but also in education, both of which are public goods and constitutional rights to the people.

Amulya Nidhi, National Co-Convener, Jan Swasthya Abhiyan said that the Punjab government was repeating the mistake made by Karnataka in 2008 where, under Arogya Bandhu Scheme, 39 CHCs and PHCs were handed over to private players. It was found through an NRHM Evaluation study in 2013 that the Arogya Bandhu Scheme has failed to achieve its primary objective to improve quality of healthcare services. Hence, the government of Karnataka has now withdrawn the PPP move in the state. In Madhya Pradesh, Chattisgarh and Rajasthan the move to privatise public health services has been vehemently challenged by civil society.

Inayat Singh Kakar, Jan Swasthya Abhiyan shared the background documents of the Punjab government’s move towards privatization of health facilities and updated the group on the same.

The campaign group has decided to undertake mass mobilization in various geographical locations of Punjab and Chandigarh, educational institutions, urban slums and public places against the move to privatise essential public services of health and education.

STATEMENT BY CAMPAIGN AGAINST PRIVATISATION OF HEALTH AND EDUCATION

The Public Notice issued by the Punjab Health Department on 20th January 2019 invited private entities to bid to run primary healthcare facilities in the state. Subsequent statements from government officials denying are vague and need to in greater detail. Similarly, the Chandigarh administration announced today that they are going to hand over government schools private players.

We feel that the move to privatise has been undertaken without considering evidence and experience of PPP in healthcare and education. Numerous reports by different stakeholders such as government, civil society and academicians have highlighted overcharging and profiteering by private players in the medical sector. Experiments such as these have demonstrated that privatisation of public services does not lead to either improvement in coverage and quality, or reduction in cost of services. Experiences from states such as Chattisgarh, Uttarakhand and Rajasthan have shown that handing over of government hospitals to private players have led to denial of services, over-medicalisation and overcharging for patients, with courts having had to intervene many times to correct these excesses. In Punjab, the failure of the PPP model for ambulance services is one such example, with ambulance services currently being dysfunctional due to discrepancies found in equipment and performance of duties by staff.

PPP shall not increase the number of persons being provided care now around 2 crore OPD nor increase reach in remote rural bet kandi and sub mountain areas nor quality nor quantity nor reduction in costs. Gov’t should conduct in house study to reduce wastage corruption especially in construction and purchases. Should ask GOI to reduce costs of drugs and appliances and use the savings in improving services should reorganise so that RMOs provide emergency and health care should stamp out absentism among doctors of all kinds of dispensaries allopathic ayurvedic unani and homoeopathic who in general are plagued with rampant absenteeism.

30% of farmers and labourers debt is due to healthcare costs, which will only increase if public health facilities are handed to private players. Rural areas are already suffering due to lack of primary services and their monitoring. A further breakdown would increase the load on tertiary care facilities such as PGIMER which are already reeling under high patient load. Given the

The number of government medical colleges in the State have remained stagnant in the over 50 years while the fees for medical education in public and private institutions has seen an increase. This greatly compromises the availability of good quality medical professionals, contributing to poor public services in the State.

The Public Notice inviting ‘Expression of Interest’ simultaneously asks for submission of proposals with details such as mode of running. However, the notice is silent on crucial details such as eligibility for application, criteria and list of facilities selected for privatisation, and the fixing of rates for services.

The Congress government at the National level is opposing privatisation of public services, but at the Punjab state level seems to be following the same route of destruction of our public health system. From a people’s perspective, such a move would be disastrous. If the Congress party is indeed invested in a pro-people agenda, then they would be better advised to focus on efforts to strengthen public health systems and provide comprehensive primary services in the State, in a fair and transparent manner.

The Constitution of India guarantees health and education to all people of India. The move of Punjab government and Chandigarh UT Administration goes against the spirit of equity envisioned by our Constitutional forefathers. This move will affect lakhs of children who are getting education in government schools, especially those from lower socio-economic strata.

‘RCEP will hit economically backward women the most’
From The Margins: Revisiting The Concept Of `Marginalized Women’
What the gods drank
How K.R. Narayanan’s Fidelity to Constitutional Values Led Him to Reject Bharat Ratna for Savarkar