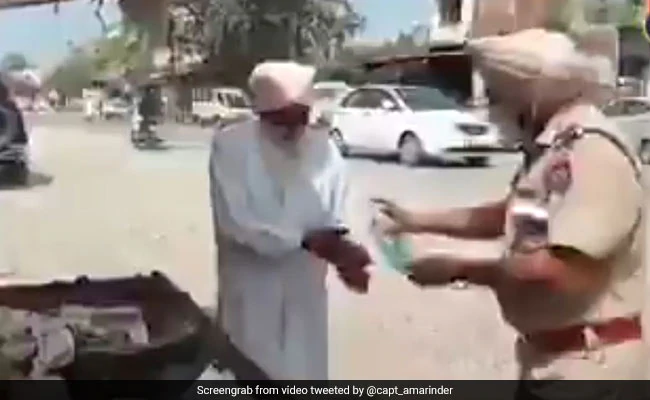 Punjab Prime Minister Captain Amarinder Singh praised police in his state early this morning after posting a video of cops buying vegetables from a roadside stall and distributing it to people in need, amid a 21-day nationwide lockdown announced by Prime Minister Narendra Modi on Tuesday night to stop the novel coronavirus outbreak in the country.

In a 65-second-long video set to music and shared on the Chief Minister’s official Twitter account, two police officers in face masks can be seen buying all available vegetables from the vendor, including tomatoes, onions, potatoes and cauliflowers, before paying him and squeezing several drops of hand sanitiser into the vendor’s hands.

The cop also squeezed a few drops into his hand to ensure protection from the COVID-19 virus.

The police then load the vegetables into a jeep and drive around the city distributing it to men, women and children from economically weaker sections of society in need of basic supplies.

India went under a 21-day “total lockdown”, starting Tuesday midnight, in an effort to stop the spread of the highly contagious COVID-19 virus, which has infected nearly 600 and killed at least 10 people.

In Punjab, which has reported 29 active COVID-19 cases and recorded one death, Chief Minister Amarinder Singh has announced new guidelines, similar to those issued by other states, warning of strict legal action against those violating curfew and home quarantine.

On Monday the state, which was the first to shut all public transport to stop the virus, announced a full curfew “as people were still coming out in large numbers”, an official was quoted by news agency PTI.

This is unlike a lockdown, when people are allowed to leave their homes to get essential commodities.

Prime Minister Modi, announcing a national lockdown in his 8 pm address to the nation on Tuesday, said it was meant to “save India… its every citizen”. He also said there was “absolutely no need to panic” as the centre and states were working to ensure an uninterrupted supply of essential items.

The “total lockdown”, coming 48 hours after the Prime Minister’s “Janata (public) curfew”, has triggered panic over availability of basic supplies like vegetables, milk, bread and staples like sugar, pulses, flour and rice.

In an effort to reduce that panic, the Punjab government has also announced door-to-door delivery of essential items such as groceries, fruits and vegetables during curfew times by registered vendors.

The government has also said it will allow people to leave their homes, on foot only, to buy essential items, but only in case of emergencies. Vehicular movement will be strictly controlled.

A Chief Minister’s COVID Relief Fund has been set up for donations to fight the crisis in the state.

The nationwide “total lockdown” means all flights, domestic and international, have been grounded. Interstate bus services have also been shut as states close their respective borders. Metro and bus services in each city have also been stopped, or are running in a reduced manner.

The COVID-19 pandemic, which originated in China’s Wuhan district in December last year, has infected more than 3.75 lakh people worldwide and killed over 16,300 others, according to the World Health Organisation (WHO).

With input from ANI, PTI