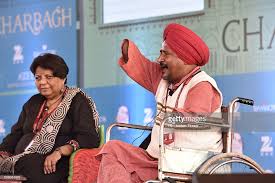 Have fought much else in life and will fight off Covid too, the singer-activist told HT amid bouts of cough on Saturday

The Dalit singer-activist, who bravely took on caste oppression of agricultural labourers and fought for justice when his minor daughter was raped in 2002 by two upper-caste men, leading to their conviction, is now battling Covid-19 in his village Burj Jhabbar, some 20km from Mansa.

Bant Singh is popularly referred to as the Singing Torso for he had to pay a heavy price for taking on the landlords and lost his arms and legs in 2006 when Jat youths of the village beat him up to a pulp and left him to die in the fields. Defying death, he went onto become a symbol of Dalit resistance in the country singing songs of protest even after his arms and legs were amputated.

The man whose biography is being made into a movie is currently in the clutches of Covid infection. His daughter Hardeep Kaur said, “He had been getting fever for the past month, but we thought it was just a seasonal infection because it is believed there is no Covid in the villages.”

While ASI Bhagwan Singh (in turban) died on the spot, critically injured ASI Dalwinder Singh succumbed on the way to hospital. Both were posted in the state’s crime investigation agency (CIA) in Jagraon. Drug smugglers shoot two ASIs dead in Punjab’s Jagraon

The HC Bar had passed a resolution announcing over urgent cases not being taken up by the high court.

However, he tested positive on May 6, but no follow-up was taken, leading to loss of appetite, continuing fever, cough, and health deterioration. At the intervention of some media persons, health workers of nearby Aklia village visited his home and provided him with a medicine kit.

Talking on the phone to HT amid bouts of cough, he said, “I have fought much else in life and will fight off Covid too.”

How the Kalahari tribals are being evicted to make way for wilderness
Chetan Bhagat - Why NRC Must Be Shelved
Chhattisgarh Journalists accuse IG Kalluri of preparing genocide in Bastar #FOE
Maharashtra Gang rape case: 29 suspects arrested out of 33, girl assaulted by 15 men on one occasion