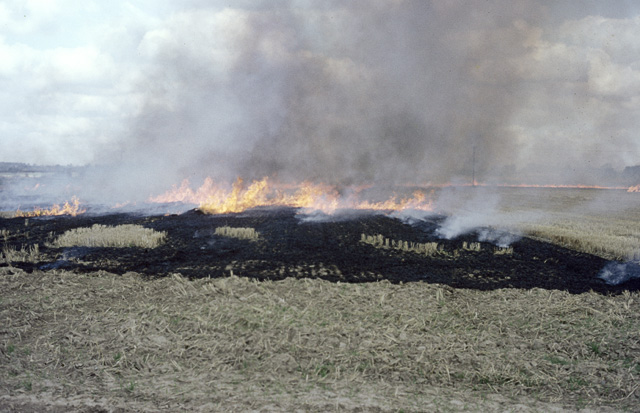 Some use it to improve harvest

Come autumn and the vexatious issue of stubble burning in northern India sets off alarm bells and leads to much hand-wringing in policy circles and civil society with little, however, to show by way of a solution. But some farmers in Punjab have applied innovative strategies to dispose of their paddy stubble that doesn’t involve the setting of their fields on fire.

Farmers in Punjab have started sowing wheat as paddy harvesting enters the last stage with just one-fifth of the crop left to be cut in fields. But it is the lack of a gap between harvesting paddy and sowing wheat and the increased time and high cost of operating subsidised straw management machines that leaves farmers who are keen to stop burning stubble with no choice.

However, amid all the hue and cry over crop burning, there are instances of farmers in Punjab who have employed novel methods to manage paddy stubble at low or negligible costs.

Take for example Mukesh Chander of Rani Bhatti village near Bhogpur in Jalandhar district. He revealed that he had collected stubble on a small portion of his field and sprayed urea on it. “This helps to convert stubble into fertiliser in around two months, which we plough back into the field at an appropriate time between the harvesting and sowing of a crop,” he said.

The use of this innovative method is a win-win scenario for farmers. “It saves a lot of expenditure on diesel, which is consumed for managing the stubble with machines, and has also reduced my consumption of fertilisers. I have calculated that although a small portion of the field is used to pile up the crop stubble, the final compensation in terms of savings is more,” said Mukesh, who cultivates over 100 acres of land that he takes on contract.

Gurdev Singh of Navan Qila village, near Shahkot, also in Jalandhar district, said he had experimented by throwing cattle dung over stubble piled up at a side of his field with a view to converting it into fertiliser. “If one can mix cattle dung and stubble after a few weeks using an earth-moving machine, then it can be ploughed back as fertiliser in the fields in six months. I have been using this method for most of the last decade and this has been much cheaper,” he said.

Shaminder Singh Sandhu of Aahli Kalan village in Kapurthala district, whose family cultivates over 300 acres, said they did not burn stubble and had ploughed it back into the fields. “This has reduced our consumption of fertilisers. Most people in our village did not burn stubble,” he said.

Lakhwinder Singh, from the same village, whose family has been cultivating 100 acres, said he only used mulcher to break down stubble into fine parts and did not spend on ploughing it back. “We have already sown wheat and it has started growing well,” he said. “The shredded stubble would ultimately get mixed in the soil during irrigation and would decompose further on its own. I have been using this method for the last three years and this has reduced my consumption of fertilisers as well as the spending on stubble management,” he added.

Although media reports suggest that there is a visible reduction in the volume of post-harvest stubble-burning in Punjab and Haryana this year, a good chunk of farmers is still reluctant to use the ‘Happy Seeder’ — a machine which allows sowing without removing the stubble, thus obviating the need for stubble burning — fearing lower yields.

Seasonal burning of crop stubble and smoke from fireworks lit to celebrate Diwali on November 7 have aggravated already high smog levels in the past few days in national capital Delhi from vehicle emissions, industrial gases and construction work.

But turning stubble into fertiliser, as some farmers have done, should serve to address the issues of both crop burning and farm yields for farmers in northern India.

CUTTING EDGE: (Top) Wheat has already started growing at a farm in Kapurthala district where paddy stubble was left in the fields after shredding. (Right) Paddy stubble piled by the sides of a field in Jalandhar district. The stubble, left under the shade of trees, is sprayed with urea as part of a process to convert it into fertiliser