Punjab Protests on arrests of intellectuals and social activists 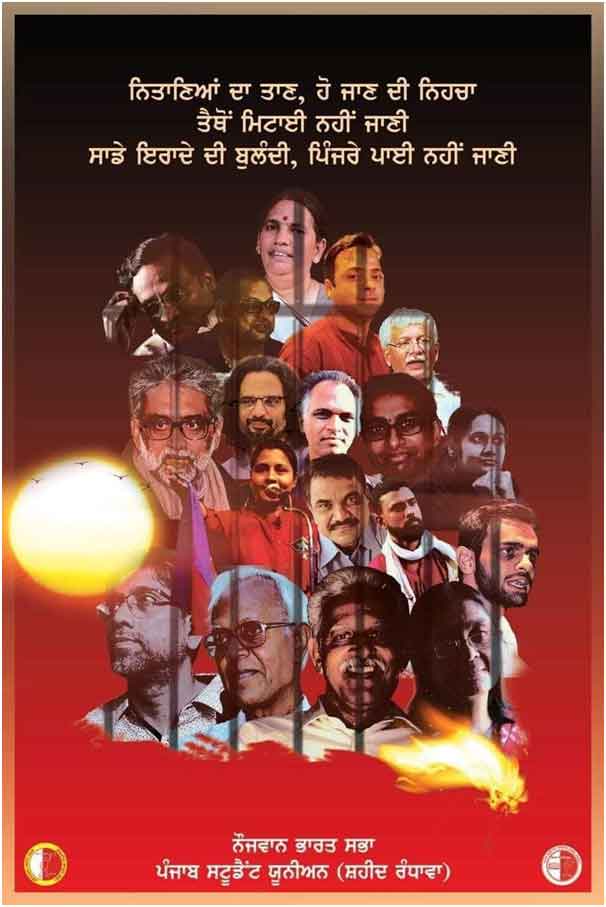 A most encouraging phenomena has emerged in Punjab in the last week with 4 most qualitative protests engulfing Punjab  in Bathinda , Amritsar ,Sangrur  and Nawanshahr against the detention of the intellectuals fabricated as Maoists.

The speakers at the very core exposed link between saffron Hindutva politics and the patronage to corporate groups like Ambani or Adani.

They portrayed how the trend of a pro-fascist state is sharpening day by day. The speakers most vividly explained how such fabricated arrests were made to rip of the very flesh of any sustained resistance or movements of people. Positive that activists who participated constituted farmers, youth ,students, intellectuals and contract employees, A most qualitative meet was also held in village Sant Nagar in Haryana by the Association for Democratic Rights projecting a similar theme on the advent of Neo-fascism of Modi govt.

On Monday at Tikri border a most impactful conference was organised  by the Bharatiya Kisan Union(Ugrahan) A spark has been lit which has the potential of turning into prairie fire .Tribute to the scale of  the organised movement of Punjab ,living upto  past traditions. The most methodical work to instil democratic consciousness is praiseworthy.

Farmers under the banner of the BKU (Ekta Ugrahan) on June 16th staged a protest against the arrest of intellectuals and rights activists by the Centre and demanded their release at bus stand in Bathinda.

The protesters blocked the road leading to the Deputy Commissioner’s residence and raised slogans against the Union Government before carrying out a protest march in the city.

Addressing the gathering, union’s legal adviser NK Jeet said, “The democratic fabric of our nation is getting eroded under the current government. Those who write for seeking justice or protecting basic rights of others are labelled as anti-national and booked under serious laws such as sedition and UAPA. Activists implicated in false cases and arrested in Bhima Koregaon case are languishing in jails for three years now. There are elderly persons among those jailed who are suffering from serious illnesses, but they were not granted bail till now.”

The convention was held at the national level under the invitation of celebrating Pandarwara given by democratic organizations and democratic jurisdiction Punjab. Addressing the gathering, the legal advisor of the organization, Advocate N. K. Jeet, writer Jaspal Mankheda and story writer Atarjit Singh said ‘The Modi government is suppressing the democratic rights of the people within the country. Dozens of intellectuals who write, speak for people’s rights and democratic rights activists have been jailed by the Modi government under false cases of treason. It has been three years since the intellectuals arrested in the alleged false case of Bhima Koregaon. There are many elderly and victims of chronic illnesses, who are not even being given bail. The Modi government could not prove any allegations against them in three years and the court yesterday had to grant bail to three including student Natasha Narwal.

BKY (Ugrahan) State Secretary Jagtar Singh Kalajhar, District Bathinda General Secretary Harjinder Singh Baggi and Paramjit Kaur Pitho said that the reason for putting people in jail is to make people aware of the might of Modi government. By putting them in jail, the government wants to create terror in the minds of the people and deprive people from struggling for their rights. o He said that every voice raised for their release is labeled as Maoist or traitor.

Harjinder Baggi, general secretary of the union, said, “It is time that people of the state as well as the nation wake up to the communal and divisive politics of the government and unite against it to protect and preserve the democratic fabric of the nation. There were brazen attempts at sabotaging the farm agitation, but unions collective resolve managed to keep the stir on course. Our movement against three agricultural laws will continue until our demands are not met.”

In Amritsar on June 17th Activists of the Jamhoori Adhikar Sabha or Association for Democratic Rights, Punjab and other like-minded organisations on Wednesday staged a protest and carried out a march while seeking immediate release of those who were booked and arrested for the 2018 Bhima-Koregaon violence.

Holding banners and raising slogans against the Central Government, they accused it of pursuing fascist agenda and appeasing the majority government. The protesters assembled at the Company Garden and later marched to the Hall Gate to send out their message among masses.

Sumit Singh, leader of Tarksheel Punjab, said intellectuals from diverse fields were put behind bars by naming them in violence and booked under the stringent norms of the UAPA. He said those held were famous as democratic rights activists, counsels, writers, stage artistes, journalists and from other professions. He said the government was steadfastly violating democratic rights of individuals and eroding the value of high offices to pursue its fascist agenda.

Dr Parminder Singh, leader of the sabha, sought that democratic rights of those lodged for the 2018 violence must be restored as no investigative agency of the country managed to prove their involvement in the violence.

In village Sant Nagar in Haryana speakers labelled the arrest of intellectuals as a manifestation of a fascist state and any symbol of resistance is suppressed as treason by the dictatorial regime.In detail they discussed the ascendancy of Neo-fascsim in India.

On 16th June in Bathinda the Naujwan Bharat Sabha and Punjab Students Union(Shaheed Randhawa) Protest was held in the city after a rally at Mini Secretariat Bathinda by the Modi government against putting people-pro-intellectuals in jails and demanding their release. On this occasion, the poster of intellectuals jointly issued by the Youth Bharat Sabha and Punjab Students Union (Shaheed Randhawa) was distributed to the people.

On June 11th in Nawanashr town of Punjab  Democratic jurisdiction, Democratic Liberals Association conducted a rally and protest at Nawanshahar for the release of intellectuals stolen in jails. The rally was presided over by Daljit Singh Advocate, Swatantra Kumar and Satpal Saloh. The gathering at the local bus stand was addressed by D. L. A Punjab Convener Daljit Singh Advocate, State Press Secretary Buta Singh, District Secretary of the Sabha and Jasbir Deep.

They said all justice loving people should raise their voice against this fascist act and step forward to release people intellectuals. These intellectuals write, speak, and step through the courts of their cases in favour of scandals. Raise voice against the oppression of the government. That’s why the eyes of the government are irritated. Modi government’s oppression, torture could not control their courage. The government and the R. S. S. Advancing her fascist agenda, using fear as a weapon, U for it. A. P. Black laws like A are being made back to back. The government has imposed a kind of unannounced emergency. When circumstances demand that people sharply oppose the government. Spokespersons have called for a sharp protest against these attacks by the government. He said that along with the Modi government, the Congress government of Punjab has given open sanction to loot the people of local and foreign pharmaceutical companies and private hospitals in the name of Corona. Punjab Government’s vaccine and mission Fateh Punjab’s exposed scandals justify this. Rising prices of medicines, vaccines, tools, daily use prove that governments and bureaucrats are operating as brokers of corporators that need a sharp people resistance movement. This is not the time to sit with our hands down.. On this occasion, State President of Women Jagriti Manch Gurbaksh Kaur Sangha, State Committee Member of Kirti Kisan Union Bhupinder Singh Waraich, Attak leader Swatantra Kumar also presented views. Various organizations also participated in this gathering. Later, protests were conducted inside the city.

On June 13, the Bharatiya Kisan Union (Ekta Ugrahan) organised a public meeting at the Tikri Border near Delhi, in defence of democratic rights and demanding the release of all those human rights activists, intellectuals and students who have been vindictively jailed by the BJP-RSS central government under draconian laws like UAPA, NSA, Sedition Act and so on. They include the 16 Bhima Koregaon detenus, students of JNU, AMU, Jamia Millia, journalists, film makers and cartoonists critical of the government. Despite heavy rains, hundreds of farmers, both women and men, attended.

All the speakers, while fully supporting the current historic struggle of the farmers, denounced the fascistic, authoritarian, communal, pro-corporate and anti-people character of the Modi-Shah government, giving numerous examples of the same. They demanded the immediate release of all those unjustly arrested without trial and without even charge sheets being served for over three years. They also called for making the June 26 ‘Save Agriculture, Save Democracy’ nationwide call of the SKM a great success. June 26 marks the completion of 7 months of the Kisan struggle and also the day when Emergency was declared in 1975. The SKM has called for fighting the current undeclared Emergency on that day.

Harsh Thakor is a freelance journalist who has travelled around India and written on blogs like ‘Democracy ad Class Struggle’, ‘Ottos War Room’ and ‘Frontier Weekly.’ Mainly written on politics of mass line in Communist Movement , Maoism, peasant struggles but also  blogs on Cricket and films.

Adani: Thousands turn out across Australia to protest against Carmichael coal mine
Press Release - A Victory for struggle for Urban Poor in Mumbai
Nakba: A Call For Justice In Palestine
Open letter by Filmmaker Madhushree Dutta - Why I am not celebrating 25 years of Majlis