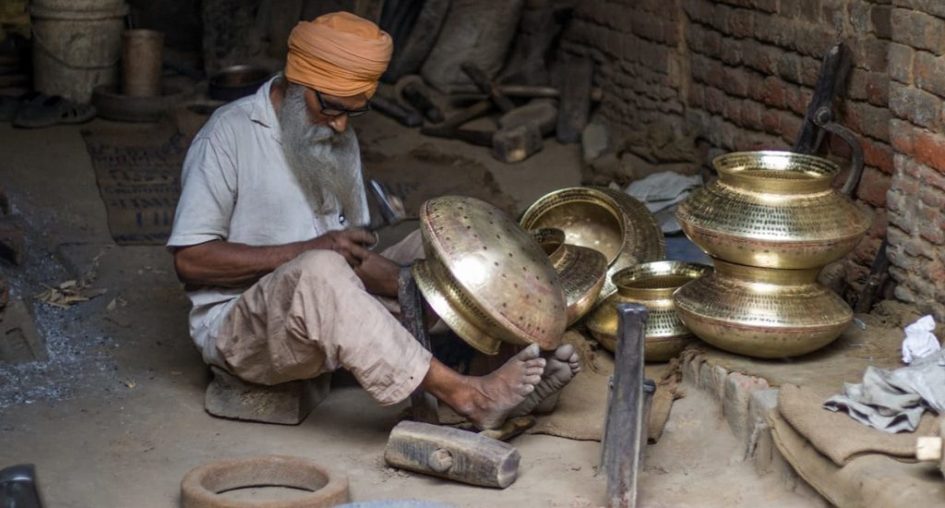 The craftsmen have been able to tap into national and international markets, thus improving their income (Photo courtesy P-TAL)

Students with a passion for social entrepreneurship have helped traditional metal craftsmen to adapt to changing times with new designs, and explore new markets within the country and beyond

With snaking lanes and contiguous houses, Jandiala Guru is like any other provincial town in Punjab. But the distinct and rhythmic sound of metal being beaten by a wooden pestle Thak… Thak… Thang… Thang… makes it stand apart. While one clatter rests, another takes its place and it continues till men leave their workplace as evening sets in.

For generations, residents of Jandiala Guru, 35 km from Amritsar, have been living with the metallic beats. This provides the place with an identity of its own, thanks to Thateras, the artisans who pursue a livelihood making  brass and copper utensils.

In 2014, the craft of the Thatheras received the distinction of being inscribed on the UNESCO’s Representatives List of the Intangible Culture Heritage – the only one to be so recognized from India. However, all was not rosy as it was a dying craft with hardly any takers, for households had switched to aluminum and stainless steel utensils over the years.

A group of people, united by their interest in social entrepreneurship, has taken the necessary steps, to not only revive the ancient craft and ensure a good livelihood for the craftsmen, but has taken the products to other countries.

“In 2017, I learnt that the Thateras’ craft was  likely to be removed from UNESCO’s list as it was a dying craft with just a handful of people practicing it,” said Mudita Bansal, then a first year college student of Delhi’s Sri Ram College of Commerce (SRCC) and member of Enactus, a global non-profit organization which connects the student community of 37 countries, academics and business leaders engaged in social entrepreneurship.

The crafts colony of Jandiala Guru was established during the reign of Maharaja Ranjit Singh, the 19th century Sikh monarch, who encouraged skilled crafters from Kashmir to settle in the heart of his kingdom in Punjab. Following the Partition, many families arrived here and adopted the craft. Soon Jandiala Guru became an area of repute due to the expertise of the Thatheras.

The process of utensil-making begins with procuring cooled slabs of metal that are flattened into thin plates and then hammered into curved shapes, for creating bowls, rimmed plates, larger pots, huge cooking utensils and other artefacts.

Utensils are manually finished by polishing with sand and tamarind juice. Designs are made by the skillful hammering and in the process leaving shiny impressions on the body of the utensil. The craft has been passed down through generations.

Over the years these artisans, now mostly in their 50s and 60s, had started to lose interest in the age-old craft due to financial difficulties that sprung out of the exploitative nature of kasariya (middleman) who paid them measly sums and at times denying that too.

“Being artisans we lack the skill of marketing our products and were solely dependent on the middlemen who exploited us,” septuagenarian Amrit Lal  told VillageSquare.in. “We continued as we had no other option to make ends meet.”

Most importantly, steel and aluminium utensils, thanks to their low price and easier maintenance, had led to the sharp decline in demand for the brass and copper vessels. What was once a thriving community of  Thatheras with close to 500 families earning their livelihood in Jandiala Guru was reduced to 30.

In order to revive the craft and provide a meaningful livelihood to the Thatheras, members of Enactus SRCC began visiting Jandiala Guru to undertake an extensive research. They had a series of meetings with the artisans, involved the local district authorities and explored avenues to market the artisans’ products.

The initiative led to the birth of Project Virasat which adopted a three-fold approach to revive demand by combining traditional designs with contemporary tastes, increasing the customer base by establishing market linkages through retail outlets and a strong e-commerce presence.

“The student-artisan initiative has received unstinted support from the Amritsar district authorities all along,” Ashu Sandhu, the local coordinator of Enactus told VillageSquare.in.

With artisans coming on board, a self-help group called Punjab Thathera Art Legacy or P-TAL (which sounds like pital, the Hindi word for brass) was formed.

Neglect and apathy of the authorities had led to the artisans lose pride for their craft and there was an urgent need to revive their confidence. Initially the team found it hard to gain the trust of the artisans, and then to attract customers.

According to Kirti Goel, an alumnus of  Delhi’s Pearl Fashion Academy and the design consultant of P-Tal, the Thatheras and their craft had become outdated due to the absence of design innovation. “The designs had to be contemporized without tampering the core values. We suggested tweaks in the designs and added value keeping in mind contemporary demand for household and kitchens,” she said.

What was sold for a couple of hundreds of Rupees has now become a style statement, thanks to design innovation. The staid, unwieldy and bulky utensils have given wayto home décor, kitchenware, cookware and tableware such as planters, masala boxes, plates and the like.

Besides brass and copper utensils, the artisans were coaxed to make bell metal products. With people becoming aware of the merits of using these metal utensils that enhance the nutrition of meals, the Thatheras have a lot of jobs at hand and their remuneration has risen to nearly five folds.

So far P-TAL has established 14 retail outlets across seven states. The first outlet was at the popular tourist destination of Gobindgarh Fort in Amritsar. It has participated in exhibitions including, Pitex in Amritsar, Dilli Haat, Archibuild in Chandigarh, Dastkar and IITF in Delhi, and two international exhibitions, namely Homesouk in Singapore, and Italian Design Week in the Italian Embassy.

Tapping the international markets, P-TAL has obtained its Import Export Code and is a registered member of Federation of Indian Export Organizations (FIEO) and Export Promotion Council for Handicrafts (EPCH), and caters to orders from over 20 countries. Besides having a dedicated website  and an Instagram account, its products are listed in popular e-commerce websites.

The revival of Thateras’ craft, and the artisans earning a reasonable income have led to youth taking up the craft. One such person is Mandeep Kumar (34), formerly a textile salesman in Amritsar. “A hardworking Thathera can now easily make Rs 20,000 a month. My father has always been proud of being a Thathera and I want to continue his legacy,” he said.