Radhe Maa Debate Beyond the Mini-Skirt and Rishi Kapoor

Rishi Majumder
It’s the theatre of the absurd again – a frequent byproduct of news cycles driving discourse. Here’s the story in short. Photographs emerge of a “God woman” wearing a mini skirt. This gets us interested in what else she’s been doing. Allegations of criminality come to the fore as do the fact that some famous faces count among her followers. Fights ensue, as do TRPs.

Yet, on the Radhe Maa episode, we would do well to ask ourselves two things: What’s being looked at? What’s being overlooked?

Here’s what’s being looked at.

First, a red mini skirt. This is what brought the circus to town. “God women” allegedly duping people and encouraging dowry are valid concerns, but not as many people had really taken notice of Radhe Maa (real name Sukhvinder Kaur) till her pictures went viral on social and then news media.

This has divided the Hindu Right. Even if some of this breed – who stand stoutly by Asaram Bapu even as the umpteenth witness in his case is attacked or murdered – have come to Radhe Maa’s rescue, many more have denounced her for donning something that, according to them, strikes at the very heart of Hindu culture. Observe two tweets that differ on the subject:
New age Sages like Radhe ma,Niranjan Jyoti are here to finish the Age old Pride Hindu culture of this country,Shame to see them @ndtv

Let no one convince you the objections to the mini skirt are objections to modernity. Many proud new flag-bearers of the Hindu Right, for instance, have had no problem with Gurmeet Ram Rahim Singh Insan’s psychedelic outfits, or his night-long concerts that are a bizarre blend of rock, pop, rap and what-have-you (one of these songs ‘Love Charger’ is immensely popular).

But messing with the male gaze is another matter. Try and decipher the subliminal messaging behind the Hindu objections to Radhe Maa and you will find in sub-text male chauvinistic chest-thumping: “We’re male. We’re Hindu. We worship women wearing Saris. We can’t stand God women in a mini skirt.”

So now key Hindu organizations and authorities are demanding that Kaur be barred from taking part in the Shahi Snan, a Nashik Kumbh Mela ritual reserved for distinguished Hindu religious personages.

Radhe Maa herself appears to be working hard to get this constituency to come around. After the controversy erupted, she visited, in far more traditional attire, the Takht Sri Hazur Sahib, a Nanded gurdwara in Maharashtra reportedly ghost-run by the RSS. 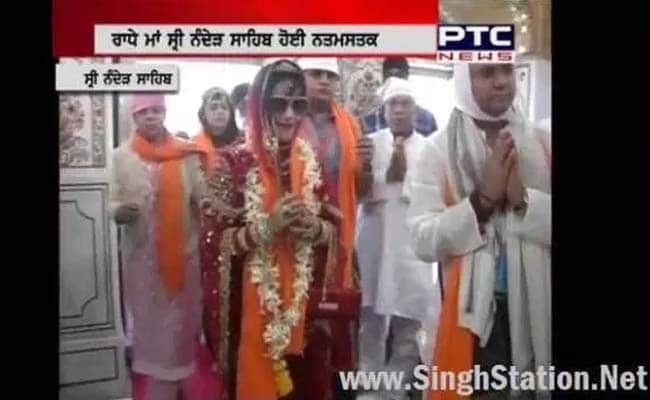 The second thing that’s being spoken about is not ‘what’ but ‘who’. As is the case often – when the discourse revolves around socio-cultural rather than political issues – the debate has been taken to the altar of Bollywood and TV celebritydom.

One of the binaries has been constructed around the twin poles of Director Subhash Ghai and actor Rishi Kapoor. To be fair, this isn’t their fault. They just put out a Facebook post and a tweet, respectively, and now they’re on two ends of a media storm.
Jaago India Jaago!Kamzori ka faida uthaya ja raha hai by these actors. I am too, but I entertain not deceive. Sochna! pic.twitter.com/uA8cxyH2MS

The question is, while Rishi Kapoor and Subhash Ghai may have substantial bodies of work to their credit, why on earth should their statements serve as thesis and antithesis to our soul-searching on a societal issue? For the rest, would you really like to grade morality on a Richter scale with Dolly Bindra on one end and Rahul Mahajan on the other?

The third thing that’s been weighing in on the brouhaha, though not out loud as much as implied, is the Posh Liberal Lens. Yes, admit it. The hullabaloo that began with a skirt has sustained this long because of a voyeuristic, bitchy interest in Maa Radhe’s satsangs. The same satsangs where she whirls endlessly, the ones with much wild dancing, and, oh yes, the ones where Maa Radhe is often carried and passed on fondly from one devotee to another as if she were actually a blessed teddy bear.

Going by the increased number of views on YouTube, these shenanigans have been witnessed many times since the news cycles picked up Maa Radhe, possibly with much sniggering on the side. Now, the truth is, bizarre as playing pass-the-parcel with a godwoman may seem, some people seem to want it.

Cults, world over, often have insane rituals which often also serve as spectacle to hide the crime. For quick perspective look at our home-grown ‘love charger’ baba, accused of murder and rape.

Still, while religion may be the opium of the masses, its harmful effects cannot be as easily defined. This is one reason it cannot easily be outlawed. What such cults do, therefore, in India and abroad, is provide fertile ground for criminality.

This brings us to what’s been relatively overlooked with regard to Radhe Maa of late.

The dowry case. This has been reported on almost cursorily by the mainstream media. But perhaps some dots need to be joined.

Put briefly, the facts of this are that 32-year-old Nikki Gupta, based out of Mumbai, has alleged that Radhe Maa pressured her in-laws to ask her and her family for more dowry. One would imagine a good regressive Indian family wouldn’t need a god woman to tell them they must extract as much dowry as possible in exchange for marrying their son.

If Nikki Gupta’s charges prove true, she was asked for more dowry – but it was at the insistence of Radhe Maa. She was assaulted – but this was while Radhe Maa was present. She was tortured – but this was by forcibly sending her to serve Radhe Maa, as if she were a servant, in her ‘bhavan’. In short, Radhe Maa, who was wise enough to apologize for portraying herself as the Hindu Goddess Durga in the early 2000s, may just have found a more lucrative avatar: the ‘God woman as guilt bearer’.

Consider this. The Gupta family, that Nikki married into, is related to the same Manmohan Gupta, the Chairman of MM Mithaiwala, whose Borivali residence Radhe Maa has reportedly shared for the past 12 years. Sanjeev Gupta, also of the same family, is Managing Director of her ‘Mamtamai Shri Radhe Guru Maa Charitable Trust’. He reportedly promotes the “God woman’s” events on billboards throughout the city through his advertising firm Global Advertiser.

Therefore, what we are witnessing here may not be so complex after all. It’s may be a you-scratch-my-back-I-scratch-yours relationship between patron and benefactor. The Guptas foot the bills, Radhe Maa legitimizes their dowry demands.

This isn’t novel. Notice how the state has been suspected, time and again, of going easy on Sant Rampal, Asaram Bapu and Ram Rahim Insaan – despite crimes like murder, rape, cheating and land appropriation that they’re accused of – because of their proximity to the powers that be. Without this quid-pro-quo, often hidden from sight by the ridiculous spectacle that accompanies deification, “God persons” would be like any other fad or phenomenon, which people could decide whether or not to subscribe to.

Till this is true, however, we need to keep looking.