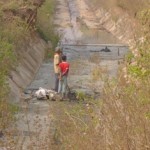 It is the fourth time we are able to document the burst of uranium tailing pipeline which carries UCIL (Uranium Corporation of India Limited) uranium mill tailing to tailing dam in Chatikocha village, near Dungridih Village. After the protest of JOAR (Jharkhandi Organsitaion Against Radiation) UCIL started cleaning process.

(Villagers says that accident similar to pipe blast occurs almost more than 5-6 times per year and the cleaning process in done very secretly).

Before this on 22th Dec 2006, 10 April 2007 and 27 Feb 2010 the pipeline burst out and radioactive slurry which is highly toxic entered in the houses. If you see the replies (of RTI) from the UCIL (attached with this mail) you will find UCIL refuting the JOAR claims and they says that they are using best technology and doing the best practice to save the local population. Here you need to remember that UCIL made his tailing dams in the rice fields of Tribal village of Chatti kocha. Half of the village was forcefully evacuated for the third tailing dam and rest half of the village is still living just 50-100 meter from the tailing dam no 3.

In 2013 UCIL organized a hyped international conference in Tatanagar inviting experts from 50 countries with millions of rupees of taxpayers and claims that they were given approval that UCIL is doing the best practice in the world.

It also becomes very important when govt is signing deals with various multinational companies for nuclear power reactor for massivpower generation, this kind of incidents indicating a very dangerous future.

After these tailing pipe accidents in Jadugoda, UCIL agreed and reach to an agreement to relocate the village Dungridih where accidents happened and radioactive material reached home. (Please see the pic.) But UCIL did not fulfill his commitments. Again in the same village the accident happened and contamination has spread.

It is also important to inform you that UCIL is trying for the expansion of third tailing dam.  For this expansion they want to be submerged in Jahergarh (sacred grove of the Adibasi community) of Chatikocha and for that they are applying all kind of dirty trick.

In the past JOAR has demanded that UCIL must not play with the life of the people, UCIL needs to  immediately rehabilitate the village Dungridih and Chatti kocha to a safe place.

Apart from this, JOAR demands-

Setup a high level committee to find why such accidents are happening and assess the damage to environment and living beings.

A comprehensive cohort health study by independent competent group to observe the impact of radiation on the communities who are living near uranium facilities for four decades of UCIL operation.

Implementing the international standards and making laws(like RECA-1990 USA) for the workers and communities.

As life of Jadugoda mine is short and it is going to close down, what are the plan for the safety of tailing dams and other radioactive wastes which are piling up in the area for coming years?

The workers who are involve in this cleaning process need to be monitored.