Singer Raghu Dixit on Wednesday tweeted that the account of the person levelling allegations against him was mostly accurate but he is not a predator.

Chennai: Singer Raghu Dixit, who is the latest to be accused of misconduct in the #MeToo movement, said Wednesday that the account of the person levelling allegations against him was mostly accurate but he is not a predator.

The singer said he “completely misread” the situation and had immediately apologised to the person concerned and will do so again in private.

Dixit, the frontman for the Raghu Dixit Project, a multilingual folk music band, was accused of sexual harassment by an anonymous woman, whose account was shared by a fellow singer, Chinmayi Sripaada on Twitter.

The woman, who called the musician “among the top predators”, said Dixit once molested her at a recording.

“Many years ago, I was called to his studio for a recording and he started talking ill about his wife (like most married men do) His wife is a wonderful human being.

“When we got done with an ad-hoc recording, he pulled me closer and asked me to give him a kiss when he was signing my cheque.. Later at the door, he tried to carry me and I ran down crying…” the screenshot shared by Sripaada read. 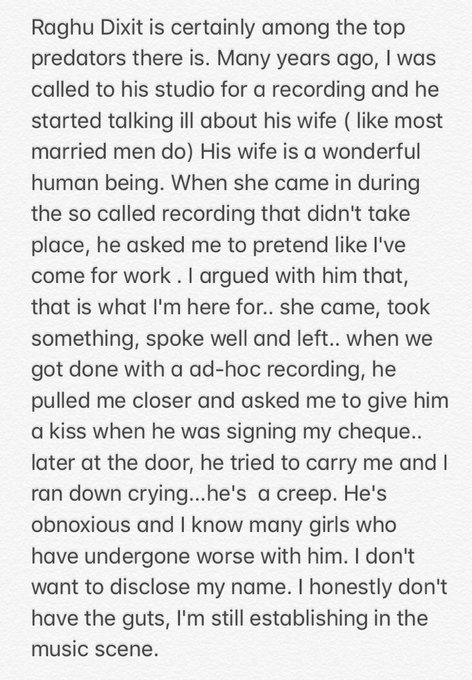 From a co-singer, a friend. I believe her.
Raghu Dixit – Your #TimesUP

Dixit, in his lengthy statement shared on Twitter, said Sripaada should not be attacked for sharing the story as she was only standing up for others.

“I remember the incident that Chinmayi’s post refers to. I know who the person in question is and I have apologised to her in the past and apart from this public apology, will do so again privately.

“This incident did happen but not entirely like it was described. It was completely silly misjudgement on my part. I gave the person a hug and that led me to trying to kiss her before she stopped and left from my studio. She then texted me and told me that she did not like my behaviour and I apologised profusely for what I did,” Dixit said.

He said he and his wife, with whom he is separated now, were in a bad space at the time and in the discussion with the singer, he did talk about his personal life.

“… I definitely sought comfort. This person was incredibly sweet and sympathetic to what I said and I completely misread the situation.

“Am I a predator? Definitely not. Did I lure this singer or any other with a chance to sing for a movie? Not at all. This singer had already finished singing the song. Did I speak ill of my wife? No, but I did vent out that we were in a bad place.” 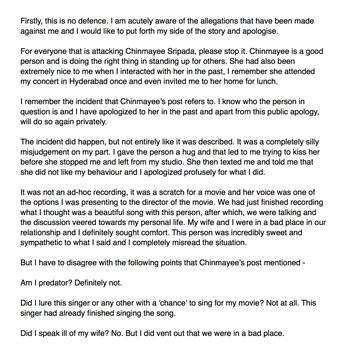 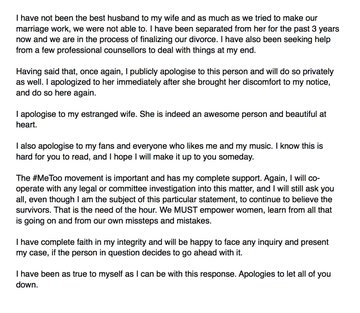 Here is my detailed response to the anonymous statement against me. I apologise for any wrong doing on my part and will do what it takes to correct it.
I have complete faith in my integrity and I have been as true to myself as I can be with this response.

Barely minutes before Dixit issued his statement, Sripaada shared another anonymous account of a woman who described how he propositioned her by narrating a sob story about his wife.

“Once he called me home to make me listen to new tunes for his movie and wanted my opinion on the same. While we were in his studio he shared his sob story and then while he was playing his tune, he asked me to sit on his lap so I could listen closely. I politely told him to take a walk. Finally, he realised nothing was happening, the screenshot, shared by Sripaada said.

The woman said the next time Dixit called her, she went with her boyfriend. She claimed other women have confided in her about Dixit’s alleged repeated behaviour.

From a co-singer, a friend. I believe her.
Raghu Dixit – Your #TimesUP pic.twitter.com/gzgwy6Io9e 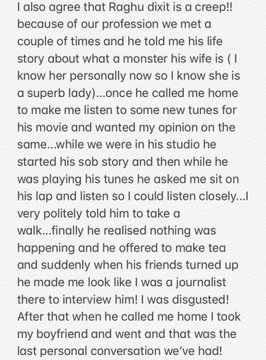 Dixit is yet to respond to the second post.

Sripaada was one of the first women from the South Indian film industry to accuse Vairamuthu of harassment when they were both in Switzerland for an event in 2005-06. After her account became public, several other women have come up with their stories against the Tamil poet-lyricist

Why Bollywood is failing to address sexual harassment ? #Vaw
Will the two Union Ministers condemn Patanjali after WHO rejected its claim on Coronil being approve...
#India - Every third child in Gujarat is underweight, says CAG #Namo #Feku
In India - 96% women denied maternity entitlement #Vaw