Rainbows for Humanity: “Accept Our Existence Or Expect Resistance.” #LGBTQ

A visibility campaign by Nazariya, a grassroots LGBT-straight

NEW DELHI: Connaught Place was recently host to “Rainbows for Humanity”, a visibility campaign organized by Nazariya, an alliance formed by youth belonging to both the Lesbian Gay Bisexual Transgender+ (LGBT+) and straight communities.

The event started at noon at Rajiv Chowk where supporters gathered and walked through the Connaught Place area. Slogans like “I am gay, that’s okay,” “We’re here, we’re queer” resonated throughout the march. The event also promoted inclusion of the SC/ST/OBC community as, according to organisers and protesters, they face double the oppression.

The event focused on making the LGBT+ community heard and spoke up against the harassment and discrimination the community has been subjected to. With the absence of laws regarding protection of the rights of the community and the existence of laws like Section 377 which criminalizes ‘sex against the order of nature’, events such as these take on added relevance.

Organiser Rishi Raj said,“My parents did not accept me at first. It took them four years to accept me. Acceptance is always slow and gradual and you have to educate people around you. That’s what we’re doing here. We’re educating people about the LGBT+ community. We are here to make people aware that we’re here, we’re queer and we are the same as you. We are not second class citizens and we deserve the same rights as everyone else.”

The program was mainly attended by students belonging to the community. Talking about her experience, one such student who wished to remain anonymous said, “I always thought that I was straight until I started having feelings for a friend and eventually, I realized I liked girls. My friends were perfectly fine with it. My school was also okay with all of this, so it was easy for me to come out and accept it.”

Another student, who wishes to remain anonymous, also talked about her experience and the need for such events. “I never paid too much attention to what it was. I just knew I liked girls always but it never made me uncomfortable, until I came out to a friend and the friendship ended. It wasn’t too difficult coming out after that. Although, I have had people avoid me and suddenly stop talking to me after getting to know. I think that is why we need such events, not only to make the community feel more validated about their feelings but also, to make others realize that we can’t choose who we get attracted to. We love who we love. This isn’t something we can control. If we could choose, then why would we choose something that we know might leave us as outcasts in the society?”

In addition to rainbow placards and slogans, the Ashmita Theatre Group performed a ‘nukkad natak’, highlighting the harassment, the discrimination and the isolation the people from the community have to face. It started off with satire, where they acted out the discrimination faced by different members of the community. They included all of the sexualities and tried to make a point regarding the society’s ignorance towards the LGBT+ community.

There were also hard-hitting one act plays which addressed issues like physical and sexual abuse that the members face in order to “correct” their behaviour, the regressive practice of young people being taken to ‘godmen’ and ‘sadhus’ in order to “cure” their sexuality and everyday bullying and isolation they face from their friends, family and society as a whole. 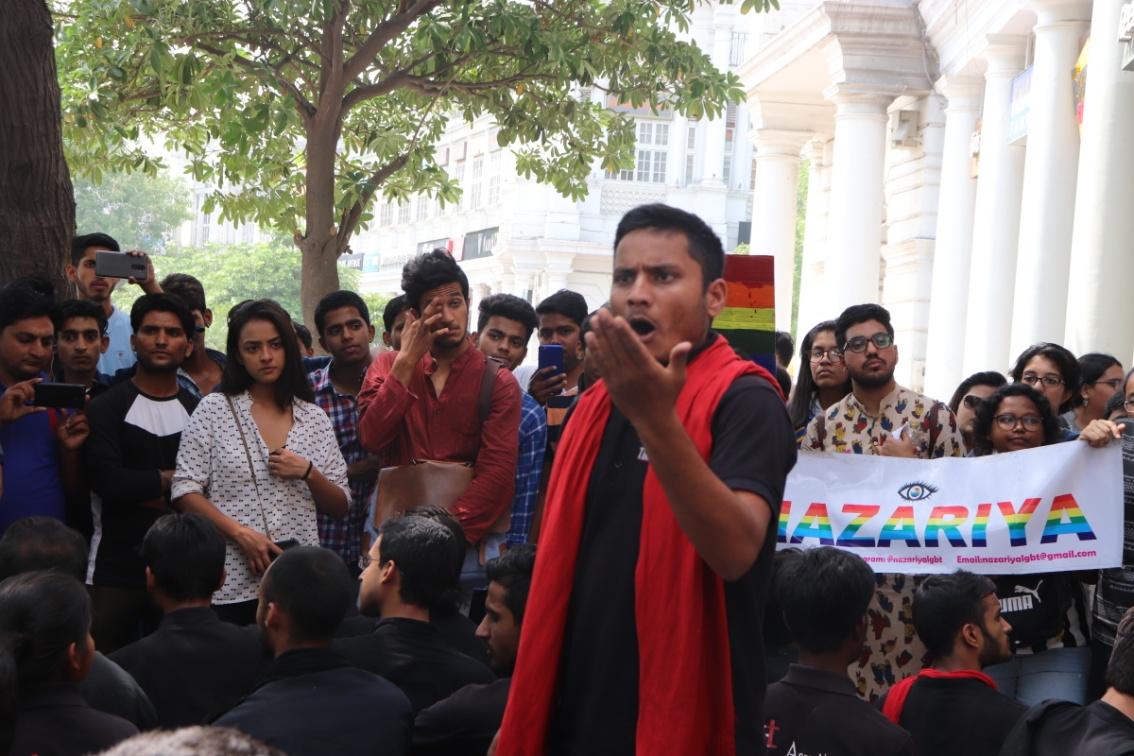 (Pictured here: One of the members of the Ashmita Theatre Group performing a ‘nukkad natak’ P.C: Ananya Biswal)

The street play ended with a statement by one of the members of the theatre group, saying, “It’s not just about sexual relationships. It’s about protecting our identity. It is not a lifestyle choice. You cannot change your sexuality for other people like you can change your lifestyle choices. It is about our self-respect.”

Pamphlets in English and Hindi were distributed to people in the Cannaught Place. The pamphlet called for the wider population to address the issues that the community faces and encouraged them to speak up against any sort of discrimination or harassment they see happening around them. It also mentioned the different sexualities that existed in the “LGBTQIA+” community.

The atmosphere was one of not just resistance and resilience but also of unity and harmony. This showed when a minor disturbance involving a policeman occurred, which was dealt peacefully by both the supporters and the policeman himself.

The need for such events, especially with practices like “conversion therapy” and “corrective rape” still in place, is even more urgent now. There is also a need for sensitization and speaking out against the injustice happening to people belonging to and identifying with the LGB TQIA+ community, as reiterated in the pamphlets and the slogans.

To quote Nazariya from one of their Instagram post after the event, “Accept our existence or expect resistance.”