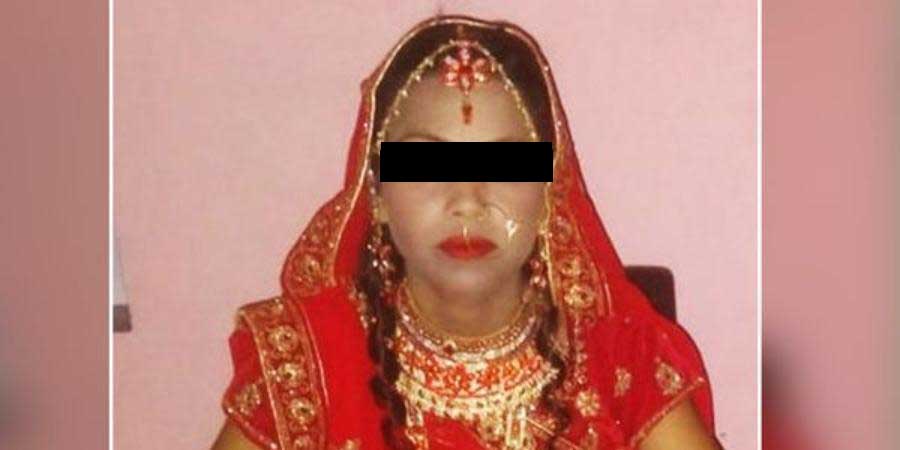 At first one could barely comprehend what Roshan Mahawar was saying. He mumbled and rued with his voice breaking midway

“Had police acted on time, Pinky could have been alive today. Since March 1, the day she was abducted from our house in Dausa, I have been repeatedly telling the police to look for her and save her life”, alleged Roshan Mahawar who was in a relationship with Pinky Saini.

According to the police, 18-year old Pinky was allegedly killed by her father on March 3 who had opposed her live-in relationship with Mahawar, a Dalit by caste.

Even Rajasthan HC protection could not save the 18-year-old victim, local police claim they were ‘not aware’ of court order

An 18-year-old woman’s murder by her own father has added another splash of fuel to the eternally burning issue of caste dynamics. The Rajasthan teenager identified as Pinki Saini, was killed, allegedly by her own father, because she fell in love with and married a Dalit man. According to the Indian Express, the 18-year-old woman had received protection from the Rajasthan High Court, so that she could live with a Dalit man. However this proved to be no deterrent, and she was murdered allegedly by her father.

According to IE, the couple’s advocates have said this murder is a result of “gross negligence” of the police. It is reported that the woman’s father, Shankar Lal Saini, himself told the police on Wednesday that he had killed his daughter. He said he killed Pinki, at his home in Dausa town, stated the news report quoting district Superintendent of Police Anil Kumar.

The police subsequently recovered the body, which reportedly bore strangulation marks. According to the SP, “Pinki Saini had been married off to a man on February 16. On February 21, she ran away with Roshan Mahawar (24). On February 26, the couple appeared before the Rajasthan High Court, and the court ordered that they be provided protection by the local police, and taken to wherever they wanted to go.”

According to the IE, the police took Pinki and Roshan to Jaipur, where they wanted to go. SP Kumar said, “On March 1, the two of them came to Roshan’s house in Dausa. From there, the woman’s family members took her away forcibly that same day.” He added, “We were searching for Pinki. Yesterday (Wednesday) night, her father reached the police station and said that he had murdered his daughter. When we went to his house, we found the woman’s body. Prima facie, it appears to be a case of strangulation.”

Police have registered a case of murder against Shankar Lal Saini, and investigations are on to check for the possible involvement of other individuals in the crime.

However, the lawyers for Pinki and Roshan have blamed the murder on “gross negligence” on part of the police. They stated that the police were bound by the High Court’s order to protect the couple, reported IE. It reported that in his order of February 26, Justice Satish Kumar Sharma of Rajasthan High Court had said, “Both the petitioners are present in person in the Court and they want to live with each other. Therefore, without expressing any opinion on merits of the case, learned counsel for the respondents is directed to advise his clients not to take the law in their hands and not to cause any sort of harm to the petitioners.” It added, “Further, learned Public Prosecutor is also directed to inform the local police authority to give protection to the petitioners and to take them at a safe place as per their wishes.”

The court was scheduled to hear the matter again on March 9, however Pinki was allegedly abducted on March 1. Then Roshan’s family registered an FIR against 11 people, reportedly naming Pinki’s father, uncle, and other relatives, and “15-20” others.

According to IE, the FIR was registered under IPC sections including those on abduction, criminal intimidation, and theft, and sections of The SC/ST (Prevention of Atrocities) Act. Roshan’s family had alleged that Shankar Lal Saini and the other accused abused them using casteist slurs, damaged their house, stole Rs 1.2 lakh, and forcibly took Pinki away.

Advocate Nawal Singh Sikarwar, who had represented Pinki and Roshan in court said, “It is gross negligence of the police that despite the High Court’s order providing the couple protection, Pinki was abducted and murdered. The couple had told the court that they feared for their safety, and wanted to live with each other of their own free will.”

According to the IE, Circle Officer Deepak Kumar said the Dausa police were not aware of the High Court’s order, “We didn’t know that the court had provided them protection. It was only after the woman was abducted that we came to know. We did not receive any intimation through official channels about the High Court order.”

Roshan was quoted by The Indian Express saying that after Pinki’s murder, he now fears for his own life. He alleged that the police had not taken his fears for their safety seriously, “I knew they might kill Pinki. I had told police this when Pinki’s family took her away. But they (police) said that after all, it was her parents who had taken Pinki away, and that they would bring her to court at the next hearing. I cried and pleaded with the police, but they did not take my concerns seriously.”

According to Roshan the police have to answer, “How is it that she was ultimately found murdered in her house? If she was right here in Dausa, at her parents’ home, why could the police not find her for three days? Her family had often threatened to kill us both. They demanded to know how I, a Koli, could even dream of being with Pinki, who is from the [OBC] Mali caste. They threw casteist slurs at me.”

Roshan, stated that around 40 men and women, most of whom were members of Pinki’s extended family, had come to his home to take her away, “We had come back to Dausa because we had run out of money.” He said, “Right after we reached home, her family members attacked us and took her away.”

According to the police, the family members of Mahawar had registered an FIR against 11 people including Pinky’s father, uncle and other relatives on March 1, as soon as she was abducted. The police have so far arrested her father in connection with her murder.

“On February 26, both (Pinky and Mahawar) appeared before the Rajasthan High Court and requested police protection. The court had ordered that they should be provided protection by the local police. The police even took them to Jaipur under their vigilance. But on March 1, they arrived in Dausa where Saini’s family took their daughter away from their house forcibly,” Dausa superintendent of police Anil Beniwal said.

“Police are still investigating. So far, we have arrested Pinky’s father Shankar Lal Saini. The post mortem has been conducted. As per the initial investigation, it looks like a clear case of strangulation,” Beniwal added. The FIR has been lodged under section 302 of IPC.

Pinky who had completed her class XII last year and Mahawar, who was pursuing an ITI course, were in a relationship since 2019, but Pinky’s parents were against their marriage.

“Her parents disliked me because I am a Dalit, I belong to a lower caste and the girl belongs to the Maali community (OBC). On February 16, Pinky was forced to marry another man. She was unhappy, which is why she ran from her house just after the wedding and started living with me. I had known her for the last two years and we were deeply in love with each other,” Roshan added.

The couple had appealed in the court that they wanted to live with each other.  On February 26, a bench of Justice Satish Kumar Sharma of the Rajasthan High Court had said, “Without expressing any opinion on the merits of the case, learned counsel for the respondents is directed to advise his clients not to take the law into their hands and not to cause any sort of harm to the petitioners. Further, learned Public Prosecutor is also directed to inform the local police authority to give protection to the petitioners and to take them at a safe place as per their wishes.”

Nawal Singh who had represented Saini and Mahawar at the Rajasthan High Court told Outlook, “This is the case of sheer negligence by Rajasthan Police. The boy’s life is also under threat and police should give him security.”

Roshan, runs a gym and is also studying at an Industrial Training Institute (ITI), Pinki was a first year college student. According to the news report Pinki’s family had forced her into a marriage, before she and Roshan eloped. He stated that he now feared for his life too, “I have learnt that three of her relatives, Kalu, Mukesh and Ranglal, have given money to some people to kill me.”

Civil society groups have demanded action against the police. Kavita Srivastava, president of the Rajasthan unit of the People’s Union for Civil Liberties (PUCL) said the incident “exposes the commitment of the police and the Rajasthan government towards women’s security. Despite the High Court’s order to police to protect the couple, Pinki Saini was brutally murdered,” adding that the civil rights organisation has demanded the suspension of police officials including the Circle Officer, Dausa, the Dausa SP, and the SHO of the Kotwali police station. Srivastava said, “Roshan made several calls on the 100 [emergency] number after Pinki was abducted, but they wasted precious time by telling him to call the Kotwali police station.”

Accusing Rajasthan Police of inaction, Mahawar said, “Since February 21, Pinky and I were living in Jaipur. We arrived in Dausa on March 1, to take financial help from my family. We discretely reached home but somehow Pinky’s family who also lives in Dausa got to know. As many as 40 family members and relatives of Pinky came to my place and forcibly took her away. I got to know that her relatives Ranglal, Kaalu and Mukesh had given a bounty of Rs 1.5 lakh to kill us. We registered an FIR of her being missing in the Mahila Thana in Dausa and kept reminding them but no action was taken by the police. Her body was found two days later in her own house. Had the police made an effort and searched for her we could have avoided this horror.”

Social activists too slammed Rajasthan Police for negligence and demanded action to be taken against the cops. “We demand action against the Dausa SP and other police officers, SHO, and the circle officer. This is shameful and despite court orders, she was murdered. This is horrific and justice should be delivered,” said the Rajasthan president of Peoples Union For Civil Liberties, Kavita Srivastava.

#Phailin - POSCO felled 1.7 lakh trees and betel vines that would have acted as natural barriers #WT...
Modi’s Failures: The Skill Development Disaster- Rs 12,000 crore down the drain #WTFnews
Jerrit John of No Nonsense production house throws Chemical/ Acid on a friend #VAW
How Essar handed out Diwali gifts to top politicians, bureaucrats and journalists in 2010: