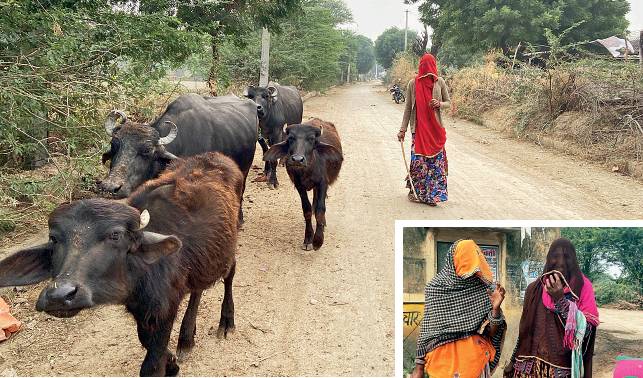 A conversation is opening up in Rajasthan over whether or not women should wear the veil, Aman Sharma reports

An hour’s drive out of the state capital of Jaipur on the highway to Ajmer in Rajasthan, a group of women waits for a bus to take them to Kishangarh.

The aged of the lot wear their dupattas as a ghoonghat (veil) but a young girl is dressed in a pair of jeans and her hair is neatly tucked in a bun.

“She is my grand-daughter and does not listen,” says 70-year-old Rani Devi. “She goes to a college in Ajmer now. But we can’t shed the ghoonghat … we have worn it for decades.”

The women do recollect a recent appeal made by Rajasthan chief minister Ashok Gehlot to the people in the state – to shed the age-old practice of wearing ghoonghat pratha and move with the times.

“I just went for the wedding of a relative of one of my ministers and saw the bride on the stage having a ghoonghat. I asked her to lift it — many people laughed and said the CM has been saying so. The girl immediately lifted her ghoonghat,” Gehlot told ET during an interview at his residence in Jaipur.

He recounted how a tradition has been formed in homes in Rajasthan for the women to wear the ghoonghat.

“We need to break the same. I ask the men in our state — how long will you keep the women captive by way of the ghoonghat? This is a male-dominated country, so we need to educate the men first. This is my personal emotion. My slogan is Beti Bachao, Beti Padhao, they will automatically shed the ghoonghat,” he says.

ET visited villages near Ajmer and Jaipur to find that the task may be tough and requires a dedicated campaign. In Akherpura village, most women wear the ghoonghat while they walk on the pavement rearing cattle or working in the fields.

Outside one house, Prem, Jamuna and Nanti, who are all sisters-in-law, offer a contrasting picture.

While the eldest of them, Prem, does not draw the ghoonghat while speaking, the other two do.

“They feel embarrassed to not wear the ghoonghat before the men in the house. I keep telling them we have all lived in the house together for years now and there is no need to keep a ghoonghat. There was a time earlier when we used to not even sit or sleep on the same bed as our husbands. But times have changed,”

says Prem. Jamuna and Nati however cite other issues: “If you step out in the village without a ghoonghat, the men object. It may lead to fights. Who wants that?”

In Bichoon village, Lado Devi and daughter-in-law Rani have different opinions too. Lado Devi says the CM’s comment would mean the women shed all their laj aur sharam (pride) which is not good for society. Rani, however, asks Lado Devi why should only women share the burden of tradition.

“If women shed the ghoonghat inside their house too, the men may object and could lead to family disputes. All is fine in cities and towns but in villages of Rajasthan, the ghoonghat has to stay,” Lado Devi says.

She points to a young Yashi rearing cattle nearby, and says how she studied till Class 12 and got recently married but wears the ghoonghat. “That is what I was always taught.

But my younger sister goes to college and does not wear a ghoonghat or wishes to marry someone who insists on it,” Yashi says.

A lady sarpanch of another village admits women are speaking out on this issue after the CM’s comment.

Gehlot says his words should not be seen as an “appeal to women” to shed the ghoonghat as he does not want any discord in families. “Right now, the women are under pressure from the men to wear the ghoonghat, so they face embarrassment and ask how they can remove the ghoonghat. So, I appeal to the men to make this happen. Let this conversation start,” the CM says.

Gehlot made this appeal earlier this week at functions organised by the dominant Jat and Rajput communities, saying they must move with the times. Fringe groups like the Karni Sena have objected to his remarks, saying the ghoonghat is a pride of Rajasthani tradition and must not be fiddled with.

However, the CM says women shed the ghoonghat when they become village sarpanches or they get educated. “In my view, the ghoonghat will only be shed by either education or woman empowerment through politics.” The state could start an educative campaign on the issue through wall-paintings and Rajasthan’s women and child development department has been tasked to prepare a proposal. “We will do this campaign. I have asked activists to help. Let the women breathe in open air,” CM says.