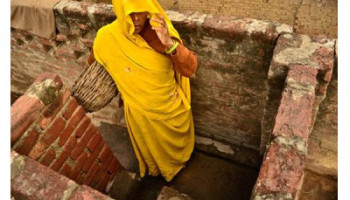 When government water schemes do not reach two tribal villages of Rajasthan, the women of Chittorgarh take matters into their own hands and install a treatment plant and a piped water supply system.

For decades the tribal women of Rooppura and Ganpat Khera villages in the Chittorgarh district of Rajasthan used to trudge two kilometres every day to fetch dirty, unhealthy water.

“Now we get clean drinking water and it will add 10 years to our life,” said Ramesh Goswami of Rooppura village.

Despite being just about 25km from Chittorgarh city, the district headquarters, development is slow to come to the two villages.

In Ganpat Khera all the people belong to Scheduled Tribes (ST), while in Rooppura half the population belongs to STs and the other half belong to other backward castes. Most of the families work as labourers in farms in and nearby villages, while some rear goats and others migrate.

Clean drinking water was beyond the villagers’ dreams until recently.

Access to clean water supply is the backbone of a healthy nation. Yet it is highly under-prioritised, despite being a UN Sustainable Development Goal.

For its part Rajasthan planned to provide 30 lakh tap connections in rural areas in 2021-22. But villages like Rooppura and Ganpat Khera were still waiting for getting clean water when the financial year ended.

With clean drinking water nowhere in sight, the women of Rooppura and Ganpat Khera continued to walk miles to fetch water from nearby sources.

The Manjari Foundation, a development organisation, has been working in these villages since 2016, helping women form self-help groups for livelihood.

During a meeting the women raised the issue of drinking water in their village.

The Manjari Foundation carried out a detailed survey identifying a suitable water source and a place for a water tank, drinking water facilities for cattle and the necessary fixtures for supplying water to every household.

The SHG women formed a pani panchayat (water council) with 15 members, 70% being women, to manage the water supply system.

The pani panchayat played an active role in planning, execution and monitoring the project.\\

Though the project was implemented with the support of PNB Housing, the team proposed the collection of Rs 2,200 per household to ensure community ownership.

After a survey found that people needed 60 litres a day, water tanks of 32,000 litres in Rooppura and 25,000 litres in Ganpat Khera were constructed.

Based on the principle that all lives matter – whether human or animal – the pani panchayat strongly suggested creating six water troughs where all animals and birds could get water also.

Tube wells were dug in both the villages. Taking sustainability and cost into consideration, the pumps are solar powered to reduce electricity consumption and recurring cost for the community.

The pani panchayat now takes care of the water management. It collects a water tariff from each family, so that future management and maintenance can be managed sustainably.

Pani panchayat is also leading the behavioural change aspects so that villagers follow management of the water infrastructure and health and hygiene practices.

I never imagined that I would get water at my doorstep. This has brought a difference to all the women in my village.

The water supply system has reduced the drudgery of fetching water, saving 2-3 hours daily, besides reducing psychological pressure and reducing conflict. It helps them earn their daily wages which they lost earlier in the excessive time spent in fetching water. There are several other community-level changes that are beyond traditional measurement tools.

As Kamla of Ganpat Khera village says, “I never imagined that I would get water at my doorstep. Now I have more time which helps me to do more work. This has brought a difference to all the women in my village.”

How scarce is water in Rajasthan?

Because of the lack of clean drinking water and toilet facilities people suffer from illnesses. In Rajasthan over 47,000 deaths were caused by diarrhoeal disease and intestinal infections in 2016 – constituting 8.7% of all deaths in the state according to the Global Burden of Disease – 2016.

This reveals the lack of drinking water as a major cause of concern and underscores the power of schemes that bring piped water to rural India.