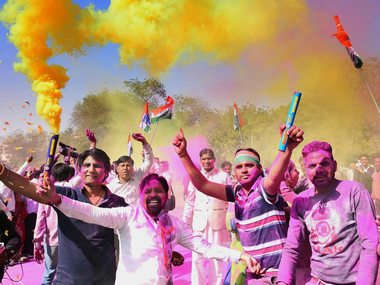 Amid the excitement of 2018 Union Budget, bypoll results for five seats in two states were announced on Thursday. The Congress and TMC performed a clean sweep in Rajasthan and West Bengal respectively, while the BJP failed to open its account in all seats, including three it previously held in Rajasthan.

In a spectacular showing, the Congress won the Mandalgarh Assembly seat and the Ajmer and Alwar Lok Sabha seats, sparking wild celebrations.

Hundreds of Congress activists burst firecrackers and danced to drum beats outside the party office in Jaipur as its candidate Vivek Dhakar trounced Bharatiya Janata Party‘s Shakti Singh Hada by 12,976 votes. Many among them distributed sweets.

While Dhakar netted 70,146 votes, Hada secured 57,170 in the by-election held on 29 January, Election Commission officials said. The election followed the death of BJP MLA Kirti Kumari due to swine flu in August.

Alwar saw a clash between Yadavs: Congress’s Karan Singh Yadav defeated BJP’s Jaswant Singh Yadav by 1,56,319 votes. According to News18, both candidates are doctors from the Yadav community which holds significant sway in Alwar. Jaswant conceded defeat and blamed the delay in the announcement of his candidature for his loss.

Congress candidates led from the beginning in vote count in both Lok Sabha seats and edged past the BJP in Mandalgarh after initially being in second place. The BJP Rajasthan chief Ashok Parnami, in a press conference, acknowledged defeat and said his party respected people’s mandate. “We will work harder and form government in 2019,” he said.

Forty-two candidates were in the fray in the three seats, all of which were held by the BJP. There were 23 contestants in Ajmer and 11 in Alwar. The elections to the Lok Sabha constituencies were necessitated by the deaths of Sanwarlal Jat (Ajmer) and Mahant Chand Nath Yogi (Alwar).

With Assembly elections scheduled later this year in Rajasthan, Congress leaders insisted that the verdict was a rejection of the BJP. Congress leader and former Union minister Sachin Pilot demanded Rajasthan chief minister Vasundhara Raje’s resignation on moral grounds. “It is a victory for people, party workers and all leaders,” Pilot told the media.

He said the BJP, after failing to woo the voters on the strength of religion, tried to polarise voters on caste lines but failed to fool the young voters. “Young people in this country have realised that the politics of polarisation doesn’t work,” he said. “The high-handedness and arrogance (of the BJP) has been rejected.”

Congress leader and former chief minister Ashok Gehlot said the results were a precursor to the 2019 general elections. “This by-election is a vote against BJP’s divisive politics.” He took a dig at the state BJP government, saying apart from changing the names of Congress-era schemes, the chief minister had done nothing concrete for the people in the past four years.

“Unemployment is hurting the youth. Today’s trends can be seen as precursor to not just state Assembly polls later this year but also to the next Lok Sabha polls,” Gehlot said.

In the Noapara bypoll, necessitated by the death of Congress legislator Madhusudan Ghose, Trinamool’s Sunil Singh won by more than 63,000 votes over his nearest rival Sandip Banerjee of the Bharatiya Janata Party. Left Front-backed Communist Party of India-Marxist candidate Gargi Chatterjee finished a close third, after running second in the initial rounds of counting.

In Uluberia, the BJP surprised everyone by taking an early lead, but eventually TMC candidate Sajda Ahmed surged ahead and registered an emphatic win by a margin of 4,74,023 votes against Anupam Mallik of the BJP, who got 2,93,046 votes.

In the 2014 general elections, Trinamool’s Sultan Ahmed defeated his closest opponent Sabir Uddin Molla of the LF-backed Communist Party of India-Marxist by a little over two lakh votes. Sultan Ahmed’s death necessitated the bypoll, with the Trinamool nominating his widow Sajda.

Molla, who is the CPM candidate this time also, was in third place, far behind Mallik. Three years ago, the BJP managed only 11.55 percent of the votes in Uluberia. Congress candidate Goutam Bose finished a distant fourth and forfeited his deposit in Noapara, which the party won in the 2016 Assembly polls in alliance with the Left Front. In Uluberia too, Congress was in the fourth position.

With inputs from agencies

India - Concerns over 'illegal' detention of Dalits
Jan Azadi - “On the path of Freedom' Marking 75 years of independence
The Battle of Koregaon: Why the anniversary has come to mean so much to Dalits
Odisha - Displaced villagers stall construction - Paradip oil refinery