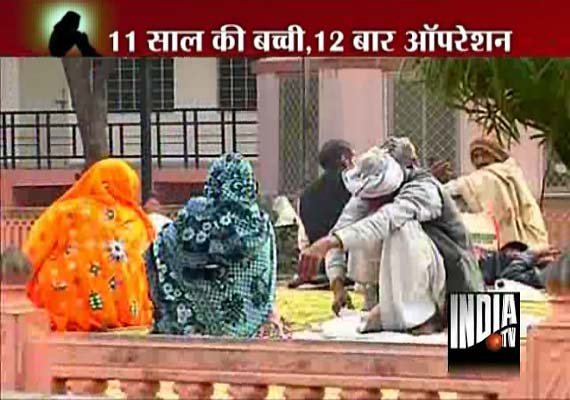 Jaipur, Jan 3: Even as the 11-year-old rape victim is fighting for her life in J K Lone Hospital here, the rapists‘ friend has threatened to rape the victim’s two sisters, if the case is not withdrawn.

The minor girl was gangraped near Sikar in August last year.

“We have raped your younger sister. You two sisters are left. We will do the same to you”, was the threat given to the sisters on phone.

The sisters alleged that the accused‘s friend told them on phone: ” What will the law do? It will send us to jail for seven years. After we will be released, we will again commit the same crime. None of you can do anything to us.”

The gangrape took place on August 20, 2012. The 11-year-old girl had gone to see a movie with her two sisters at a cinemahall on Rani Sati Road in Sikar.

When they were returning home, a vehicle came, and one of the two persons inside it tried to drag the elder sister. But she managed to escape. This time, the assailant dragged the youngest sister into the vehicle.

Both the men  inside the vehicle were drunk, say the sisters. One of them owns a factory  in the locality, the girls say.

Even as the girls ran to their home, the rapists took the youngest sister to a village, 27 km away from Sikar, where four others joined them in the gang-rape.

Eighteen hours later, the girl  was thrown on Lothal Rod, 10 km away from Sikar on August 21 at 11 am, and the rapists absconded.

Police admitted the gangrape victim to Sikar hospital, but considering her critical condition, she was sent to Jaipur hospital.

Dr S D Sharma, superintendent of J K Lone Hospital, Jaipur says, “she was in a critical state. She had severe injuries in her private parts. Our doctors had to repair her organs.”

Three days later, on Aug 25, police arrested two of the accused, and later four others were nabbed and sent to jail.

Two of the six accused are now out on bail. They were accused of sheltering the rapists.

The victim’s family is now living in fear, even as threatening calls are being made to them from the rapists’ friends.