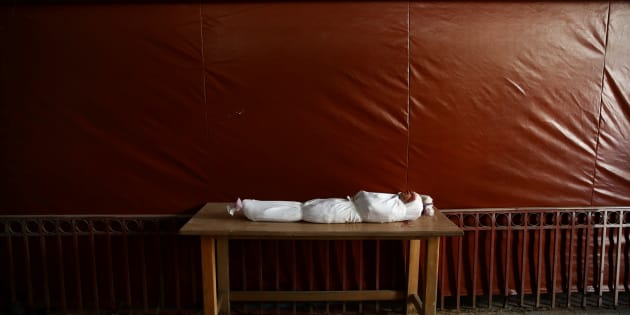 A hospital in Ranchi refused to perform a CT scan on a grievously injured child because his father was falling short of 50 rupees. According to an article on Bengali daily Sangbad Pratidin, the boy had fallen down while playing in his home and sustained head injuries. He was rushed to Rajendra Institute of Medical Sciences in Ranchi.

After a preliminary check-up, doctors suggested that the boy has to undergo a CT scan to reveal the extent of his injuries. The boy was wheeled to the said section of the hospital where his father was asked to deposit Rs 1350. Unfortunately, Pratidin reports, his father had just Rs 1300 with him at that moment. He asked the hospital to accept the money and promised to arrange the 50 rupees soon, but allegedly, the hospital refused to budge till they had the entire amount.

The boy died waiting to get the CT scan done.

This is not the first time the medical college and hospital of the Jharkhand government has faced allegations of negligence.

In December 2015, an emergency meeting was convened in the hospital to rein in doctors who were slacking. The move came after two accident victims were left unattended for several hours in the emergency ward as no doctors were present there at night.

It’s difficult to say what effect the meeting had on the hospital’s staff, because in April 2016 allegations of negligence surfaced again. This time, a woman in her labour was admitted to the hospital on a Sunday night. Within hours of admission, doctors told her that the foetus had died in her womb. However, the dead foetus was not removed from her uterus for two days. It was alleged that her condition worsened owing to this. The patient’s family said that the attending doctors told them they didn’t have blood of the required group to perform the surgery. And the doctor in charge said that they wanted to induce normal delivery of the dead foetus.

A few months later, in July, doctors in the same hospital operated the right kidney of a patient when she had stones in the left kidney. Her husband, a driver with meagre earnings, approached the doctors when he saw stitches on the wrong side of her body. At the time Economic Times reported the news, the aggrieved patient had been promised further medical attention by the doctors, but there was no progress in the case. And the head of the urology department blamed junior doctors for the mistake.http://www.huffingtonpost.in/2017/08/22/ranchi-hospital-refuses-to-perform-ct-scan-over-non-payment-of-rs-50-injured-child-dies-waiting_a_23156545/?utm_hp_ref=in-homepage