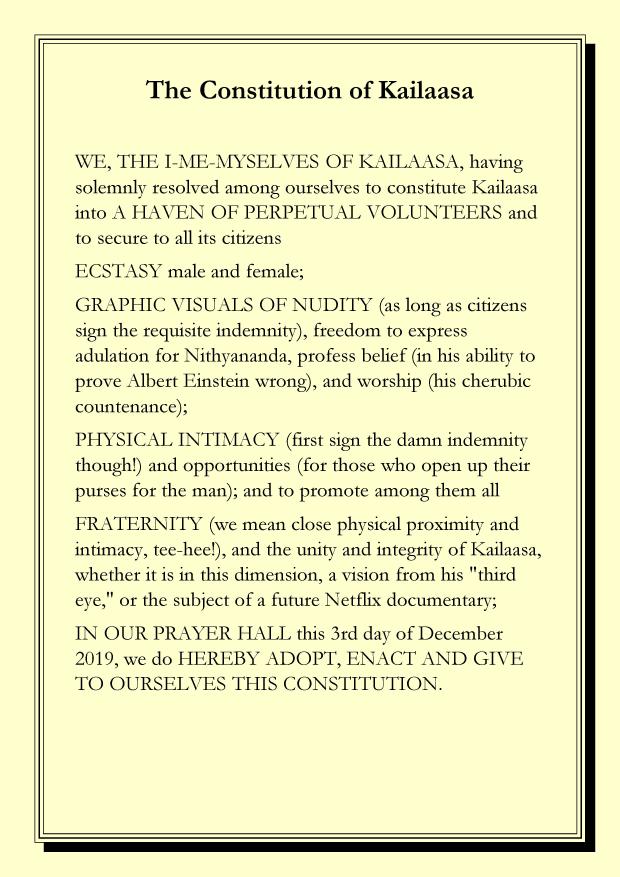 We give him a preamble to his new constitution

One of India’s best-known—certainly most entertaining—godmen has apparently sought to set up a country of his own.

Nithyananda, who has been on the run after the parents of some inmates of his facility in Ahmedabad, Gujarat, accused him of child abuse, has reportedly sought the United Nation’s recognition of Kailaasa, a private island somewhere near Ecuador or Trinidad & Tobago.

Since it is not every day that a self-styled incarnation of god gets to set up his own country, Quartz India felt it could help this fledgling “nation” in its first steps by suggesting a preamble to its future constitution (we hope it will have one if doesn’t already). We modelled it on the one prefacing the esteemed constitution of India, the godman’s country of origin. All the noble goals included in this preamble are borrowed from the “contracts” volunteers were reportedly made to sign with Nithyananda’s organisation

Gujarat govt to take over school embroiled in controversy

The Gujarat government said that it will take over the management of the DPS (East) School here till the end of the current academic session, so that its students do not suffer.

The Gujarat government said on Wednesday that it will take over the management of the DPS (East) School here till the end of the current academic session, so that its students do not suffer.

The Central Board of Secondary Education (CBSE) canceled the schools’s affiliation on Sunday, leading to protests by parents.

The school is embroiled in a controversy after it was found that it had leased out land to an ashram run by absconding godman Nithyananda.

The state education department said last week that its inquiry found that the school management had forged a government NOC submitted to the CBSE for getting affiliation.

“After meeting CBSE officials today, we have taken a decision in the interest of students. The government will take over management of the school until the completion of this sessio,” said education minister Bhupendrasinh Chudasama.

“It will ensure that students from class 1 to class 12 will be allowed to continue their studies in the same school till at least the end of the current session,” he said.

Over 800 students of the school, located at Hirapur on the outskirts of Ahmedabad, were left high and dry after the school was closed following withdrawal of its affiliation by the CBSE.

Parents and students launched an agitation against the school’s closure. Students stayed put outside the campus late Tuesday night, and continued their protest on Wednesday.

They held placards saying, “We want our school back”, “education is power”.

School principal Hitesh Puri said the school should be given three months to submit necessary documents and get back the affiliation.

“The affiliation was taken away mid-session, so where will the students go? How will they prepare for the board exams? If school has no NOC, it should be given time (to submit one),” he said.

An inquiry set up by the state government on the CBSE’s request to look into alleged illegal lease of land to Nithyananda’s ashram revealed that the school had forged the No-Objection-Certificate of the education department which was submitted for CBSE affiliation in 2009.

Did You Know What Happened To Surpanakha And Her #Aadhaar ?
India - The Language used in press reports in Hindi on rape #Vaw
Gujarat elections: Is BJP importing campaign material from China?
India - Minister blames mobile phones and non-veg diet for rapes #Vaw #WTFnews