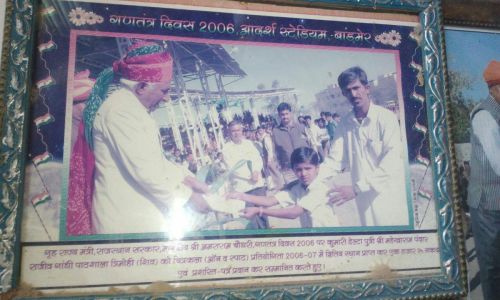 By The Bangalore coalition for Justice for Delta Meghwal A painting by Delta Meghwal

On March 29th,2016 the dead body of Delta Meghwal, a 17 year old Dalit girl from a village in Barmer district of Rajasthan was found in the water tank of the Jain Adarsh Teacher Training Institute for girls in Nokha, Bikaner where she was studying. The police took her body in a municipal garbage carrying vehicle (tractor) without videographing it.

According to the FIR filed by her parents, there were only 4 girls at the hostel as all the other girls had gone home and had not returned by then. On the evening of 28th, at 8 pm, she called her father and told him that their Warden Priya Shukla had sent her to the PT Instructor Vijendra Singh’s room, with the excuse of cleaning the hostel (this shows the clear collusion of the warden in the case). There, Delta was raped by Vijendra Kumar Singh, the PT teacher.

The Institute , in an attempt to cover up the incident, took written apology from both her and the PT Instructor with a statement that this happened with mutual consent. The usual strategy of victim blaming was used in the most brutal manner against a 17 yr old girl. Mainstream English newspapers have not yet covered the issue. It did not inspire national debates on the safety of girl students in hostels or caste based sexual violence.

Several glaring questions remain unanswered – Why did the college administration not take action and file a police case against Vijendra Kumar Singh, since the girl is legally a minor? Why were the parents not informed? Why did the college force a letter that the abuse was a consensual relationship? Why did the police use a garbage tractor to take the body? Why was due process not followed? Why was a minor Dalit girl sent to the room of a male PT teacher and forced to clean the hostel in the first place?

In the light of these atrocities against young Delta Meghwal, the Bangalore coalition for Justice for Delta Meghwal demands –

1. Criminal action to be taken against the principal of the college, Eashwar Chand Vaid and warden Priya Shukla who are complicit in the rape and murder of Delta and subsequent covering up of the case.

2. Criminal action be taken against Vijendra Singh for rape and murder of Delta Meghwal.

3. Police officers who removed the body with a garbage tractor without videographing it to be suspended from service immediately and atrocities case to be registered against them

4. A Prevention of Atrocities (SC/ST) to be filed against the college administration, principal Eashwar Chand Vaid, warden Priya Shukla, PT master Vijendra Singh ( in addition to other criminal cases of rape, murder and criminal conspiracy)

5. An independent, high level enquiry to be done into the case and the legal proceedings to happen through fast track court to ensure speedy justice.

6. Although we realise that no compensation given will bring any semblance of justice, we also demand compensation of 50 lakhs to be given to the family of Delta Meghwal.

Join us as we protest this brutal atrocity and demand for justice for Delta Meghwal.

The Bangalore coalition for Justice for Delta Meghwal is organising a protest meeting at Bangalore Town Hall at 5 PM, April 2

– The Bangalore coalition for Justice for Delta Meghwal