Most of the faculties and scholars, who got the threat letters, have cancelled their plan to attend the Guwahati conference.

New Delhi: Already in the thick of controversy over religious conversion and use of foul language against minorities, the Hindutva forces are now trying to occupy the education system as well, this time directly. “We warn you that never attend any AIOC, including the one at Guwahati, Assam (sic),” reads the latest diktat.

Scholars, especially Muslims, preparing for the 47thsession of the All India Oriental Conference (AIOC), have received these threat letters signed by Rashtriya Hindu Sena, apparently yet another Hindutva frontal organisation. 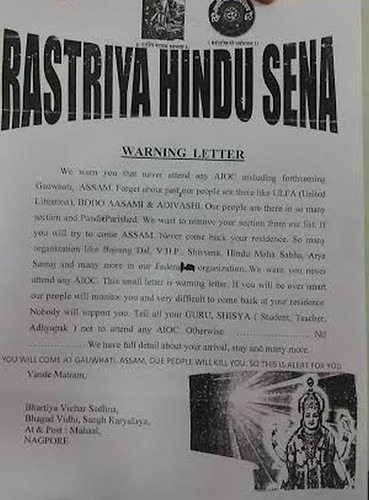 These letters seem to have been sent by speed-post from Vadodara but bear returning address of the Sangh Karyalaya (RSS headquarters) at Nagpur, with no undersigned authority. It ends with slogan Vande Matram with a picture of a Hindu deity on the right side.

A quick internet search reveals Rashtriya Hindu Sena is supposed to be the parent outfit of the Sri Ram Sena, the moral policing watchdog promoted by Pramod Muthalik.

The Oriental Conference is held every two years in different parts of the country. This time it is going to be held at Guwahati University in Assam from January 2 to 4, 2015. The Bhandarkar Oriental Research Institute, Pune organizes the All India Oriental Conference since 1918. In the beginning it revolved around Sanskrit but later on, other oriental languages and subjects too have been included in the conference.

The letter has been sent individually to almost every scholar aspiring to participate in the conference from the Arabic, Persian and Islamic studies section. The letter clearly writes that “we warn you that never attend any AIOC including forthcoming Guwahati, Assam.”

“This small letter is warning letter. If you will be over smart, our people will monitor you and very difficult to come back at your residence. Nobody will support you. Tell your Guru, Shishya (student, teacher, adhyapak) not to attend any AIOC. Otherwise …………Nil………. We have full details about your arrival, stay and many more (sic),” thus goes the letter content.

Finally in bold letters, it concludes: “IF YOU COME AT GAUWHATI, ASSAM, OUR PEOPLE KILL YOU.SO THIS IS ALERT FOR YOU”.

The Rashtriya Hindu Sena further says in the letter: “Our people such as ULFA (United Liberation), BODO ASSAMI & ADIVASI, are there in so many section and pandit parishads. Organization such as Bajrang Dal, VHP, Shiv Sena, Hindu Maha Sabha, Arya Samaj and many others are present in the federal organization. We want to remove section from our list. If you will try to come to ASSAM. Never come back your residence. (sic)”

Rizwanur Rahman, section president of Islamic Studies and a faculty member of Jawaharlal Nehru University, who got the threat letter, said: “There are two possibilities. Either they want the conference to fail or they want to remove the sections of Arabic, Persian and Islamic studies.”