Villagers in Ratnagiri swing between hope, despair and apathy as they continue their resistance against the Jaitapur nuclear power project, slated to be the world’s biggest

NO ONE ASKED FOR OUR CONSENT BEFORE TAKING OUR LAND. THEY JUST ASKED US TO TAKE THE COMPENSATION. I DON’T WANT NUCLEAR ENERGY. I WANT MY LAND. VIJAY GAVANKAR, resident of Madban village MANY OF THOSE LIVING IN VILLAGES NEAR THE TARAPUR ATOMIC POWER STATION IN THANE HAVE GOT CANCER. IS THIS THE FUTURE THAT IS BEING PLANNED FOR US? MANSOOR SOLKAR, fisherman from Sakhari-Nate village MANY IN THE AGITATION FEEL THAT WHILE THE SHIV SENA HAS BEEN SUPPORTING THEIR CAUSE, THE PARTY HAS NEVER TAKEN A PRINCIPLED STAND AGAINST NUCLEAR ENERGY AND IS ONLY IN THIS TO GAIN POLITICAL MILEAGE

On a sultry, mid-March afternoon, Ujwala Pangerkar, a 30-something journalist with a TV channel in Ratnagiri can barely contain her disbelief that a “small protest” against a nuclear power project in her town has attracted the interest of “Delhi media”. “You came all the way for this?! Yeh issue 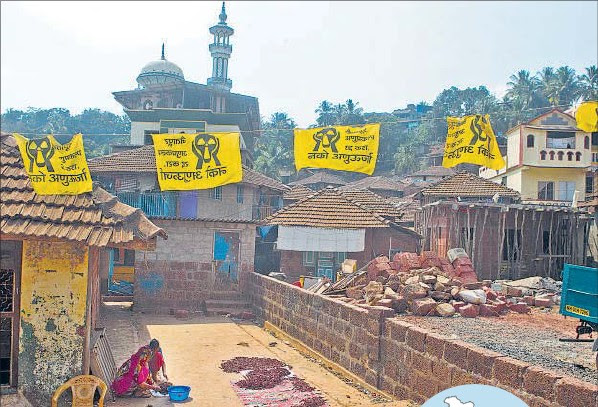 toh ab khatam hai (This issue is over now),” she tries to convince me, before the oppressive heat of the coastal town forces her to give up.

Despite the weather, and Ujwala’s cynicism, a 100-odd people have gathered to join in the protest march organised by the Shiv Sena against the world’s largest nuclear power project set to come up on the Jaitapur-Madban coast, a couple of hours away from Ratnagiri. Everyone has come with an agenda — Shiv Sena members are here because local political calculations demand that the party be seen at the forefront of the agitation. Yasmin Halim Shah, a resident of a village nearby, says she doesn’t know “anything” but came because the Sena workers promised her money and transport. Premanand Tiwarkar is here because he wants his land back; and Naushad Dhalwelkar is here to save his fish.

The story of the agitation against the 9,900 MW nuclear power project, spread over 968 hectares, is perhaps only as complex as the motives of those at the Sena’s protest. Locals say that unrest around the project, set to contribute significantly to India’s nuclear power generation target, began in 2005, when landowners from the five affected villages learnt of the district administration’s land acquisition activities. This, it seems, set the stage for a messy chain of events — mobilisation of landowners and fishermen, and their fierce opposition to the project; the appropriation of their resistance by the Shiv Sena; the violent turn in the agitation; an unlikely martyr; a dynamic local leader’s rise, and fall from grace, and eventually, politics over compensation for the land, that has changed life in the village forever. In the backdrop of these events on ground zero, however, lay the intricate web of foreign policy considerations and the give and take of the global nuclear trade.

Last month, the inking of two new agreements during PM Modi’s visit to France (see graphic), gave a new lease of life to the project that was stuck in the impasse over power tariff and nuclear liability issues for several years, and also revived the Sena’s almost flagging campaign on the issue. But for those in the agitation, the years of resistance have left many fatigued, and even apathetic to the cause, despite their rhetoric of opposition. While some have made considerable material gains from the compensation for their land, others are still full of despair over the uncertain future that awaits them once the project starts operations.

According to Satyajit Chavan, a civilengineer-turned activist, who has been an active part of the agitations, the story has been going on since the early 1970s, when negotiations were on for a project on the Madban plateau, about 80 feet above sea level. In 1989, the Nuclear Power Corporation of India (NPCIL) set up a plan to build two 1,000 MW nuclear power projects in the area.

More than two decades later, somewhere in 2005, land acquisition activities began for a much bigger project, and after a couple of agreements between India and France, the plant’s office came up on the JaitapurMadban coast in 2007. At the time, locals say they were completely unaware of the project, let alone the complex international story behind it. While the NPCIL claims that their operations were “transparent”, those whose land was at stake insist otherwise. “In the initial stages, we were told that the project was for national development. We were happy, and supported it,” says Milind Desai, a doctor in the village of Mithigavane, and a prominent activist in the anti-Jaitapur agitation. “Our opposition began when we learnt about nuclear radiation and its long term effect on humans, animals and the environment,” says Desai. He also recalls that land acquisition was accompanied by the rhetoric of taking “barren” land. “But people here grow mangoes, cashew, figs, kokum and betelnut. How can they say our land is barren?”

In Madban, Vijay Gavankar, who lost his land in the acquisition process and is, perhaps, the only one who has not accepted compensation is determined to claim it back from the NPCIL. But Vijay and his wife are in a minority now. The village, once at the centre of the agitation, is muted in its opposition, especially after the death of the dynamic leader, Pravin Gavankar. Under Pravin, who, with a few others, had mobilised several landowners, people had resisted the compensation for several years.

The successful mobilisation of the locals even drew the Shiv Sena — desperate to gain lost ground after its popular leader from the region, Narayan Rane, joined the Congress in 2005 — into the agitation. Despite the support that the Sena enjoys here, those who have been part of the agitation say the party has joined issue with them only because it is interested in reaping political dividends. “Unlike the Sena, we are totally against nuclear energy,” says Desai, who has also accepted compensation for his land. Despite the rhetoric of opposition though, he concedes that the agitation is not as vibrant as it used to be, and puts it down to the history of severe repression from the administration. “Many who expressed opposition against the project were slapped with false FIRs and arrested. Those who left work to participate in the protests were already enduring losses. On top of it, they also had to make regular appearances at the police stations,” he says.

In 2011, clashes between the protestors and the police led to the death of Tabrez Sagvekar, 28, a resident of the fishing hamlet of Sakhari-Nate. While there are different accounts of the events leading to his death in the firing, the incident shook people in Nate, and beyond. Despite the loss of a young man, and the fact that their livelihood is seriously threatened, Nate’s fishermen say that their interests have been overlooked since they are only “indirectly” affected (see graphic) by the project. Many in the village speak fluently of the “dangers of nuclear radiation”. They are aware that fishing will be affected by even “a slight rise in the temperature of the water”, and that the project will be located in an earthquakeprone zone.

“We are not in it for compensation,” says Amjad Borkar, 50, an influential leader in the village, and a prominent anti-Jaitapur activist. “We just don’t want the project to come here, or in Gujarat [referring to Uddhav Thackeray’s statement that the project should be taken to Gujarat], or anywhere else,” says the former Congress party worker, who has now switched to the BJP. Borkar accepts that his political affiliations are contradictory to his cause [the NDA-led government is in favour of the project, as was the UPA], but insists that his support to the issue is unflinching. “Aligning with the Sena also is a compulsion now. Who else is speaking for us?”

Support for the agitation also dwindled when Pravin withdrew from it in 2013, and agreed to accept the compensation, prompting others to do so too. Pravin had been detected with lung cancer, and there are several theories doing the rounds in Ratnagiri that he was “talked into” it by some of his close aides (including Desai), who, in turn were lured by the district administration, who promised them heavy compensation and favourable decisions in land disputes in district courts. Some locals allege that the district administration pressed for withdrawal of the agitation on the behest of the then Industries Minister of Maharashtra, Narayan Rane.

In 2013, the compensation for the “barren” land was increased to 22 lakhs per hectare, one of the highest compensations awarded for “that quality of land”, according to the district administration. The windfall, however, brought with it several conflicts with Madban finding itself at the centre of several family disputes over land ownership and compensation claims. Incidentally, one of those families happened to be that of the late Pravin Gavankar.

But even those who have taken the money, at least in Madban, are not in favour of the project, Vijay insists. Ironically, the looming fears of the village “being finished” have not prevented many from refurbishing their houses with the compensation money. Those families might be in denial, but Vijay says that he’s been noticing the ominous signs: “Until last December, we were able to take our cows to graze inside the plant area. Now, they are not letting us do that even,” he says, pointing to the heavily guarded plant premises.

Back in Ratnagiri, the cynicism is hard to shake off. If this is about the dangers of radiation, why is no one worried about Ratnagiri, wonders Ujwala? The Sena wants the plant to shut down operations, she says. “But what about the 200 villagers who are working at the plant? What will happen to them? Are they not the people of Konkan?”