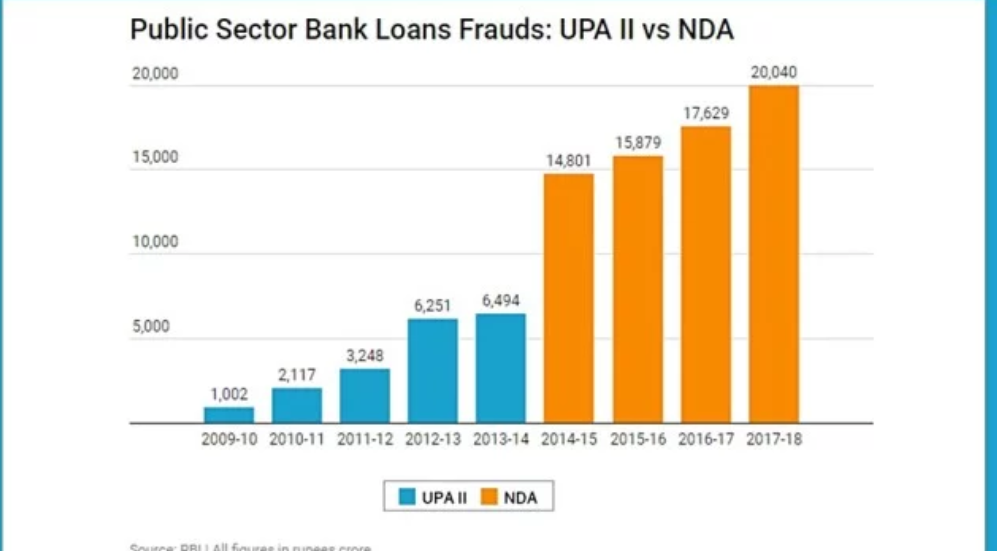 In response to an RTI application, RBI admits that both the number of and the amount involved in bank frauds have spiralled in the last 4 years compared to the 5 years of UPA-II between 2009 & 2014

In response to an RTI application filed by economist and activist Prasenjit Bose, the Reserve Bank of India has now confirmed that in the last four years of the Modi Government, loan frauds have amounted to a whopping ₹55,000 crore more than in the previous five years of UPA-II under former Prime Minister Manmohan Singh.

Expressing his shock and dismay, Bose said, “Where are the investigating agencies? How many fraudsters have been arrested and prosecuted for their crimes? The Union Finance Ministry must be held accountable for this massive loot of money from the banks and undermining the public sector banking system.”

Not only have the number of fraud cases increased under the present regime, the amount involved in loan frauds have also grown more strikingly; it has in fact trebled. This points towards systemic corruption in sanctioning loans to large borrowers.

The PSBs account for 88% of the amount involved in Loan frauds.

Excerpt of RBI reply to RTI query on loan frauds

The reply from the RBI, he maintains, highlights the following:

Mumbai Woman, Raped And Tortured With Iron Rod, Dies In Hospital
RSS’ Tryst with Terrorism: Past and Present
#India has 477 people on death row- shocker ? #deathpenalty
The Ethics Of Telling Trans Stories In An Artistic Space