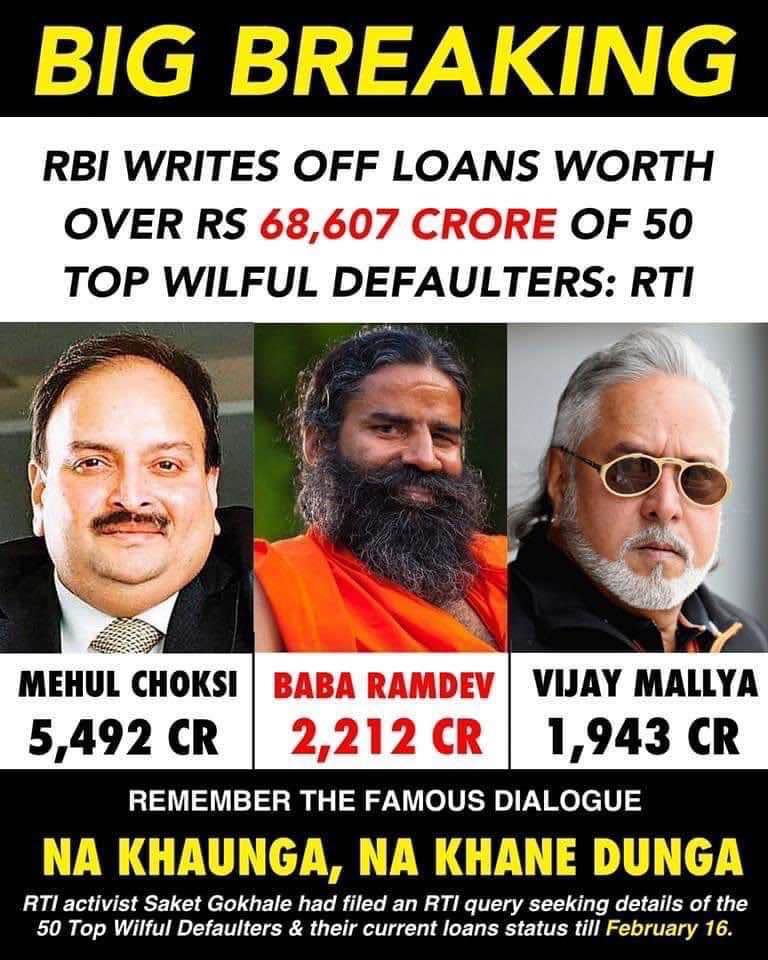 The Reserve Bank of India (RBI) has written off a staggering Rs 68,607 crore due from 50 top wilful defaulters, including absconding diamantaire Mehul Choksi’s Gitanjali Gems and Vijay Mallya’s Kingfisher Airlines, till September 2019. The RBI said the amount (Rs 68,607 crore) comprises outstanding and the amounts technically/prudentially written off till September 30, 2019.

The details were revealed by the RBI in an RTI reply to activist Saket Gokhale. In its response, the apex bank released the names of the top 50 defaulting firms and the amount owed by each company. Choksi’s Gitanjali Gems is the first among the 50 top defaulters with a massive sum of Rs 5,492 crore written off by the RBI. This is besides the other group companies, Gili India Ltd and Nakshatra Brands Ltd, which had taken loans of Rs 1,447 crore and Rs 1,109 crore respectively.

The RBI responded to my RTI with a list of willful defaulters (and the amount owed) as of 30th Sep, 2019.

Choksi is currently a citizen of Antigua & Barbados Isles, while his nephew and another absconder diamond trader Nirav Modi is in London. In another surprising revelation, the central bank has written off Rs 2,212 crore owed by Baba Ramdev and Balkrishna’s group company’s Ruchi Soya Industries Ltd.

Sandeep Jhujhunwala and Sanjay Jhunjhunwala-promoted REI Agro Ltd, with an amount of Rs 4,314 crore, is second only to Gitanjali in the wilful defaulters list. Both the directors are already under the scanner of the Enforcement Directorate (ED) for over a year.

“After (Finance Minister) Nirmala Sitharaman refused to answer Wayanad MP Rahul Gandhi’s question on top 50 willful defaulters in the Lok Sabha, I’d filed an RTI asking the same question. The RBI responded to my RTI with a list of willful defaulters (and the amount owed) as of Sept 30, 2019,” Gokhale said as he tweeted the images of the RTI response.

Gokhale tweeted that the RBI’s claims of not having updated the list since September 2019 was “shocking”. The central bank also claimed in its response that the list of overseas borrowers is exempt from disclosure. “This means they will not name willful defaulters in tax havens,” Gokhale said.

Meanwhile, in response to the RTI response from the RBI, Rahul Gandhi on Tuesday tweeted in Hindi: “I asked a simple question in parliament – tell me the names of 50 biggest bank scammers. Finance Minister refused to reply. Now RBI has put names of Nirav Modi, Mehul Choksi and other BJP friends in the list. This is why they hid the truth from parliament.” The Congress also demanded answers from the prime minister on why their loans were waived.

#India - Irom Sharmila said in 2011 - ‘I don’t want to be a martyr’, are you Listening ? #Vaw #AFSP...
Gujarat with one of the worst records in child malnutrition is building a Patel statue at the cost o...
Two Dalits on indefinite fast, seek justice
UP- Woman on way to file FIR set ablaze by molesters #Vaw