Reasons India’s Law Commission Says the #DeathPenalty Should Be Scrapped 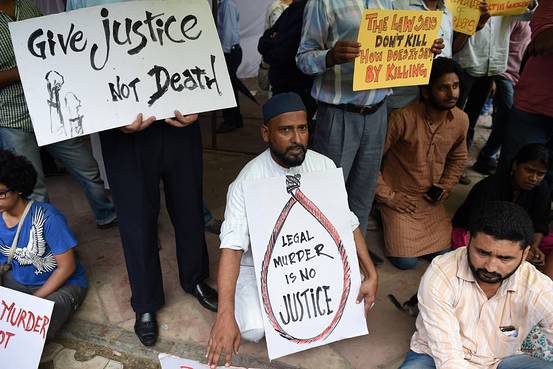 Indian social activists hold placards during a protest against capital punishment in New Delhi on July 30.

India’s Law Commission released a report this week recommending that the country move toward abolishing the death penalty, except in terrorism cases to safeguard national security.

It marks a shift for the body that advises the government on which laws have become outdated: In its previous major review in 1967, the commission concluded that India couldn’t risk the “experiment of abolition of capital punishment.”

This time around, in a 251-page document, “the Commission feels that the time has come for India to move towards abolition of the death penalty.”

At the moment, judges in India can impose the death penalty in the “rarest of rare” of cases, including treason, mutiny, murder, abetment of suicide and kidnapping for ransom.

In 2013, an amendment to the law permitted death as a punishment in cases where rape was fatal or left the victim in a persistent vegetative state; as well as for certain repeat offenders.

According to the Law Commission report, recent executions have been few and far between. The latest was the execution of Yakub Memon in July. He was found guilty of being behind a series of explosions that rocked Mumbai in 1993, killing more than 250 people.  On average, 129 people are sentenced to death row in India every year, the Law Commission report said, citing figures from the National Crime Records Bureau.

Previously, in reviewing the death penalty, the Law Commission rejected its abolition citing the size of the country and diversity of its population across which law and order had to be maintained.

“A great deal has changed in India,” the commission’s 2015 report said.  It listed a higher national wage, changes in development, the introduction of a new code of criminal procedure in 1973, the emergence of constitutional due process standards, calls for abolition of the death penalty from political parties and judicial developments among the reasons to review capital punishment.

It’s not a deterrent

India’s murder rate has declined, falling from 4.6 per 100,000 people in 1992 to 2.7 per 100,000 in 2013. That has coincided with a decline in the rate of executions, “raising questions about whether the death penalty has any greater deterrent effect than life imprisonment,” the report said.

India’s Supreme Court has raised questions about “arbitrary sentencing” in death penalty cases, the report said. Making the sentencing less arbitrary would be difficult since any categorization of offenses doesn’t take into account the differences between cases, it added.

Administration of criminal justice in India is in “deep crisis,” the report says. It cites a lack of resources, an overstretched police force and ineffective prosecution as among the reasons. As a result, the administration of capital punishment is vulnerable to misapplication, it said. Mercy powers have failed in acting as a final safeguard against a miscarriage of justice, the report says, adding that the Supreme Court has pointed out gaps and illegalities in how courts have discharged the powers.

Waiting is almost torture
People sentenced to death by Indian courts face long delays in trials and appeals, the report said. “During this time, the prisoner on death row suffers from extreme agony, anxiety and debilitating fear arising out of an imminent yet uncertain execution,” the Law Commission said. It added that solitary confinement and harsh conditions imposed on prisoners were degrading and oppressive and that the Supreme Court had acknowledged that the circumstances of being on death row in India amount to “near torture” for the convict.

India’s in a minority on the death penalty

India has retained capital punishment while 140 countries have abolished it in law or in practice, the report says. That leaves the South Asian nation in a club with the U.S., Iran, China, and Saudi Arabia as a country which retains it.