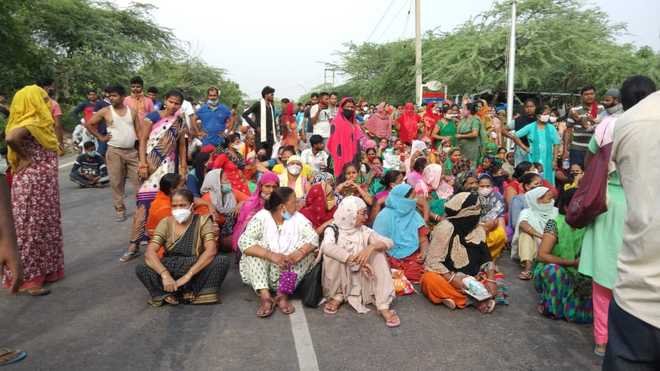 Second round of the Chitthi Andolan (letter movement) of the Khori village residents, whose more than 6,000 houses were demolished as they were allegedly built on forest land, has begun, with hundreds of them telling the authorities of the Municipal Corporation, Faridabad, that no one has received the promised financial assistance of meagre Rs 2,000.

Signed and sent by email, the letters also demanded that the Municipal Corporation of Faridabad should open its regional offices at Chungi No 3, Chungi No 2 at the Haryana-Delhi border and reopen the e-portal, so that the residents could apply for rehabilitation.
The NGO Team Saathi, which has taken up the cause of the residents, said in a statement that the condition of the people devastated from Khori village is “getting worse day by day” and there is “no solitium, i.e. financial assistance of any kind.”

It continued, “Till November 15, more than 5,000 people had applied for flats in Dabua Colony”, but “many applications have been rejected.” It regretted, “Dabua Colony is still not habitable. There is no water, electricity and sewer facility of any kind. It’s full of dirt. The rooms are torn apart. Doors and windows are not complete. There is no condition to live there even for the next several months.”

The NGO further said, “There are many such people who have not been able to submit their application till November 15, the deadline, on e-portal. There are working class people who are mostly illiterate. They could not submit their application on the e-portal due to lack of information or due to lack of understanding. Many people made some mistakes while filling the e-portal. To rectify those mistakes, there is a great need to re-open and edit the e-portal.”

According to Team Saathi, “The purpose of the letter movement is that people can convey their demand to the government, and to inform the people about the order of the Supreme Court and to run the process accordingly. Not everyone filled the form on e-portal for flats in Dabua Colony. However, their houses in Khori village were demolished. Therefore, they are entitled to get this minimum financial assistance of Rs 2,000.Meanwhile, Team Saathi has released a video with the title “Can People Live in this Hell?” suggesting the type of rehabilitation being offered to those whose houses have been demolished.

ASHA worker ‘gangraped’ in Varanasi #Vaw #WTFnews
Delhi HC -Don't insist on documents like Aadhaar to give benefits of maternity schemes
I was threatened before I withdrew the case against Amit Shah: Rubabuddin
In Kerala, RSS burns down library, people hit back with books