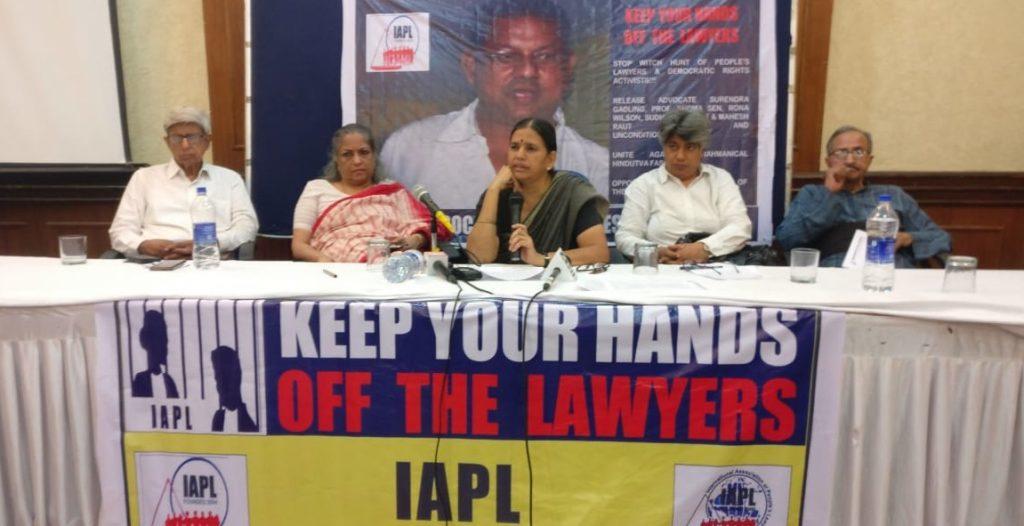 Use of draconian laws flayed

NEW DELHI: The Indian Association of Peoples Lawyers held a press conference in Delhi today to condem the arrest of five activists including advocate and its secretary general Surendra Gadling from his residence in Nagpur. They demanded the immediate release of the all the five including Gadling, general secretary, Indian Association of People’s Lawyers from Nagpur, Professor Shoma Sen, Head of Department (HoD) of English, Nagpur University, Sudhir Dhawale, editor of the Marathi magazine Vidrohi from Mumbai, Rona Wilson, public relations secretary, Committee for the Release of Political Prisoners (CRPP) and Mahesh Raut, anti-displacement activist from Bharat Jan Andolan and former Fellow at Prime Minister’s Rural Development for Gadchiroli District.

These arrests have ostensibly taken place in connection with an FIR registered in January 2018 alleging that dalits had been incited to violence. Whereas actually violence had been incited and unleashed on the dalits by Samabhji Bhinde, leader of Shiv Pratishthan Hindustan and Milind Ekbote of Hindu Ekta Aghadi, in response to the dalit assertion during Bhima Koregaon Shaurya Din Prerna Abhiyan. Milind Ekbote was arrested for few days and later released on bail, where as Sambhaji Bhinde is yet to be arrested. However, the above named democratic rights activists, professors and lawyers were arrested without any mention in the original FIR.

Adv. Sudha Bhardwaj, condemning the arrest of Adv. Surendra Gadling, National Secretary, Indian Association of People’s Lawyers (IAPL), said “The arrest of Advocate Surendra Gadling is another example of the intensifying attacks on People’s Lawyers. Recently Advocate Upendra Nayak of Odisha, Advocate Murugan of Tamil Nadu, Advocate Satyendra Chaubey of Chhattisgarh have all been implicated in the cases of their own clients, which is absolutely unacceptable as per United Nations principles on the Role of Lawyers.

Advocate Surendra Gadling was an iconic example to many dalit lawyers defending their oppressed communities. Particularly after the Maharashtra Bandh and the 2nd April Bharat Bandh by dalit communities all over India, hundreds of poor dalit youth have been picked up and incarcerated in patently false cases. Many groups of dalit lawyers started getting together to defend them, even free of cost. No doubt this must have caused great unease for the vindictive state apparatus. The bias of the State is all the more obvious when the leaders of Hindutva organisations named in many complaints and FIRs as instigators of the Bhima Koregaon violence – Milind Ekbote and Sambhaji Bhide – whose anticipatory bail applications have been refused by even the Supreme Court, still roam free.”

Drawing the parallel from Advocate and founder of Bhim Army, Chandrashekar Azad ‘Ravan’‘s arrest, Senior Advocate Ravikiran Jain, who represented him, spoke about unfair use of National Security Act (NSA) and other draconian laws, such as Unlawful Activities (Prevention) Act (UAPA), which are used to incriminate activists, Dalit and other minority group for standing up to their rights and speaking up against their oppression. He also said that UAPA goes beyond the provisions that were used for mass arrest during emergency.

Addressing the press, Senior Advocate Nitya Ramakrishnan, Supreme Court of India, condemned arbitrary arrest and draconian UAPA, which was used in arresting the above-named activists and lawyers. Adv. Ramakrishnan said, “Under UAPA the central government has full freedom to declare any organization as a terrorist organization where membership per say makes it an offence. What the process has become now is merely the presence of Maoist literature has become enough to declare someone as a Maoist which is clearly against the provision of UAPA which already is a draconian act. Automatically a person is charge-sheeted as Maoists. In Binayak Sen’s case, Supreme Court had said, if someone is in possession of Gandhian literature, does that make that person Gandhian?”

Advocate Poonam drawing the pattern across the country said, “what is happening in Saharanpur, Nagpur and people who are fighting for the Dalits and minorities are being attacked.” She also pointed out the ‘dirty game’ of the prosecution, where Advocate Surendra Gadling was also stripped of his basic fundamental rights during arrest and he was produced at Judge’s residence and not in the open court, which is against the procedure laid down by the Hon’ble Supreme Court of India. Advocate ND Pancholi remarked that in the Emergency people were detained under provisions of CrPC and MISA, but presently the situation is worse than that of an undeclared Emergency.

IAPL strongly condemns the arrest of Advocate Surendra Gadling and others and demands for their immediate release. IAPL also welcomes the support of all civil right organizations which have come together to demonstrate their support against the State which crushing all voice of dissent.

These arrests were purportedly made under an FIR registered on January 8, 2018 at Vishram Baug Police Station, Pune with regard to the Elgar Parishad organised by Bhima-Koregaon Shaurya Din Prerna Abhiyan, a coalition of 260 mass organisations.

While the Elgar Parishad was underway, Hindutva groups had reportedly unleashed attacks on the Dalits who were on their way to the meeting. This resulted in a riot-like situation wherein Dalit and Maratha groups clashed at several places in Pune district, in which, one Dalit was killed and hundreds of people were injured.

On January 3, an FIR was registered at Pimpri police station, Pune, in which two pro-Hindutva leaders Milind Ekbote of Samast Hindu Aghadi, and Sambhaji Bhide of Shiv Pratishthan Hindustan were charged for orchestrating violence during and aftermath of the Elgar Parishad.

Reportedly, Ekbote and Bhide along with others, on December 29, had desecrated the Samadhi of Dalit icon Govind Gaikwad in Wadhu village, near Koregaon village, instigating violence between Dalits and Marathas in the district. Of the two accused Hindutva leaders, only Ekbote was arrested (who was later released on bail), while Bhide, who claims to be a close aid of Prime Minister Narendra Modi, was never questioned by the Maharashtra Police in this regard.

Committee for the Protection of Democratic Rights (CPDR), in a statement, has condemned the arrests as “open show of State terror and complete bypassing of the Rule of Law by the BJP government” and demanded immediate release of the activists.

“These arrests are in the face of the mass demand of several political parties and human rights organizations and activists and the Prerna Abhiyan in particular to arrest the leaders of Sangh Parivar organizations, Sambhaji Bhide and Milind Ekbote, who were responsible for the violence on 1st January, 2018 at Bhima-Koregaon. The Fadnavis government, which has been protecting these actual perpetrators of the violence, has been attempting to create a false narrative that the violence at Bhima Koregaon was caused by the Elgar Parishad and that banned Maoist organizations are behind the Prerna Abhiyan,” the CPDR statement read.

The speakers noted that Gadling’s case is being linked with communal disharmony that occurred at the Elgaar Parishad programme held at Shaniwarwada in Pune on December 31. Gadling’s house was also raided by police on April 17, 2018. Though the original FIR did not have his name, police confiscated all possible CDs, hard disks, computer systems – including his family’s personal devices. There has been no news as to whether there was anything substantial connecting him to the Maoists.

The speakers demanded that all arrested be released. Ravi Kiran added that UAPA is similar to Terrorist and Disruptive Activities (Prevention) Act (TADA), Prevention of Terrorism Act (POTA) and Maintaince of Internal Security Act (MISA) and these types of draconian laws were not even implemented during the emergency. He said that while implementing and regulating these laws the police and judiciary work on the same type of mindset. He also mentioned the case of Seema Azad, who was arrested on the grounds of keeping some Maoist literature and her case made to look like a crime just by association.

Advocate Poonam said that all the five accused needed to be released immediately. It was reported that Gadling was presented at the Magistrate’s house, not at the court and he was without a lawyer. She asked whether the government was trying to make a joke out of the legal procedures. She also said that the arrest was a direct attack on the backward castes and the people representing them by the BJP government.

She recalled the case of Bhim Army’s Chief, Chandrashekhar Azad who was arrested after caste related violence broke in Saharanpur in May 2017 under National Security Act (NSA) using which the state can place any citizen under preventive detention without legal recourse. She said that by arresting these activists under such draconian laws the government is trying to suppress the voice of Dalits and other backward castes.

All of them also criticised the mainstream media for over sensationalising and dramatising the issue instead of giving an unbiased account. They urged the media to report the facts so as to ensure early release of the five arrested.

Private Tech Companies Collecting Data on You and Selling Them to the Feds #social media #privacy #...
Anonymous employees' letter talks of Times Now's blatant PR in the name of journalism
Rajasthan court acts against university for harassing dalit
Extra Judicial Killing by central force while victim was standing in a queue to caste vote