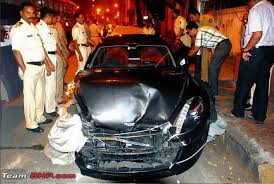 Mumbai, Dec. 25: A prime witness has identified the driver of a Reliance-owned Aston Martin that was involved in a pile-up early this month as 55-year-old company chauffeur Bansilal Joshi rather than a “clean-shaven young man” who fled the scene.

Foram Ruparel, 25, an MBA student whose Audi was hit during the December 8 incident, identified Joshi as the man behind the Aston Martin’s wheel in a statement recorded by a magistrate yesterday, police officers who requested not to be identified said.

Eyewitnesses including Ruparel had earlier claimed to have spotted “a clean-shaven young man who did not look like a chauffeur” get off the Aston Martin and flee the scene in one of two Honda CRVs following it, media reports quoting police sources had earlier said.

But the day after the 1.30am pile-up on Peddar Road, the middle-aged Joshi turned up at Gamdevi police station and claimed he had been driving the Aston Martin, police sources have said.

It was not clear whether Ruparel identified Joshi in person or from a photograph yesterday, or, if neither, whether the MBA student mentioned Joshi by name, or, in that case, how she came to know his name.

Joint commissioner of police (crime) Himanshu Roy and deputy commissioner Nisar Tamboli did not respond to this newspaper’s calls or text messages.

The police had not arrested Joshi — who police sources said weighs around 100kg — after his December 9 statement, saying they were not sure that he matched the description Ruparel had provided. Officers also said that CCTV footage from the accident site had been inconclusive.

A PTI report quoted an unnamed senior police officer as saying today: “Since the victim (Ruparel), who was earlier confused and changing her statements, has now identified Joshi as the driver, we would arrest him. The mystery as to who was driving the luxury car ends with the complainant identifying Joshi.”

The PTI report quoted police sources as saying that Joshi had been with the Ambani family for several years and usually drove Akash, Reliance Industries chairman Mukesh Ambani’s son.

According to the agency report, Joshi had told the police he had been asked to drive Akash on December 8 morning, and decided to test the car in the early hours. He was returning from Marine Drive when the accident took place.

Police sources said they were waiting for Joshi’s fingerprint report and would match it with the fingerprints on the steering of the Aston Martin, which was seized after the accident.

Reliance Ports, which owns the Aston Martin, has said the company would compensate Ruparel and Vikram Mishra, a pharmaceutical firm employee whose car too was damaged in the pile-up. The amount has not been revealed.

“Both would be paid a compensation,” a company source said.

Ruparel was driving her Audi, with three friends in the car, when the Aston Martin allegedly rammed it from behind. The impact caused the Audi to jump over the road divider and hit a luxury bus coming from the opposite direction.

The right front wheel of the Aston Martin came off and hit Mishra’s Hyundai Elantra. Nobody was injured in the pile-up.

MUST READ- Aston martin crash – no compensation from reliance