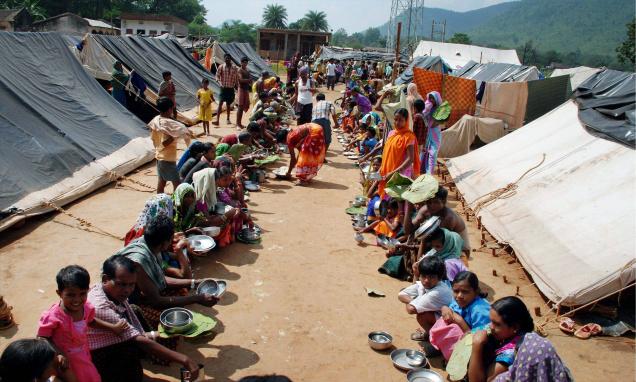 Today is the 8th anniversary of Kandhamal pogrom. When we look back on one of the worst communal violence against Christian communities in the history of modern India, what lessons can be learnt?

In 2015 August, I was in Kandhamal on the 7th anniversary of the Kandhamal pogrom. When I marched with a sea of people through the streets of Raikia, the Hindutva citadel in Kandhamal and the nerve centre of the 2008 violence, I thought “Kandhamal will not happen again”. There were thousands of survivors of the Kandhamal violence marching with me while the perpetrators of the violence silently looked on from the sidelines. The Adivasis and Dalits   who were subjected to the worst violence against Christian minorities in the history of modern India had risen like a phoenix from the ashes of Kandhamal and were telling the world, we’ll not let another Kandhamal happen again.

India has seen even worse violent communal pogroms but nowhere in my memory people came together to form a collective survivors movement as in Kandhamal. They weren’t demoralized in spite of acute government apathy in delivering justice, rehabilitation and compensation. They came together as a community to resist the designs of the communal forces with three simple demands “Peace, Justice and Harmony”. On that day in Raikia, there were community kitchens to distribute food and water for the thousands of people gathered, public transport to arrive at the venue and a lot of solidarity and good will among people. Yes, it was HOPE marching through the streets of Raikia.

When I committed to write this article I asked myself again, will there be a Kandhamal again? Then it struck me, yes, it can happen again, thousands and thousands of them, if we don’t learn the right lessons from Kandhamal.

On 2nd November 2003 Countercurrents.org published an article by Angana Chatterji “Orissa: A Gujarat In The making”. It was a warning. It seems nobody paid heed to it and then Kandhamal exploded in August 2008. Countercurrents.org is still publishing dire warnings about the plight of our planet and the state we are in, day in and day out. Most of the scientific community is convinced that we are on the brink of runaway global warming leading to climate change which will put the lives of billions of human beings and other species under threat. Resource crises, especially Peak Oil, are driving modern civilization, like a runaway train towards what Ugo Bardi calls the Senecca Cliff. Income disparity has multiplied so far as that richest 62 people own as much wealth as half of world’s population.  Human population is about 7.4 billion. If everyone on the planet consumed as much as the average US citizen, four Earths would be needed to sustain them. We are cutting down forests, driving out the Adivasis from their natural habitats, mining every mineral that’s available anywhere on earth, polluting our rivers, lakes and making our oceans acidic and desertified. Jared Diamond in his seminal classic “Collapse: How Societies Choose To Fail or Succed” asks this poignant question “what were Easter Islanders saying as they cut down the last tree on their island?” Easter Island civilization which survived for centuries collapsed, ending in cannibalism, just like several other civilization that collapsed similarly. The symbolic Doomsday Clock maintained by the Bulletin of the Atomic Scientists reads “three minutes to midnight.” Yes, the warnings are there. It is not some paranoid cults that live in mountain tops who are making these predictions but some of the best minds in the world that include scientists, academicians and intellectuals. Everybody is predicting collapse of modern of civilization or even worse, the near complete wipe out of human species.

Collapse is an easy word to pronounce but a very difficult world to live. Collapse is not something that’s going to happen in the distant future. If you open your eyes and look around you can see it happening in Syria, Iraq, Afghanistan, Libya, Somalia and many other places.  You can’t reduce the events happening in these places to just imperialist ambitions or the reactionary actions of a particular community. What’s happening in these places are a combination of those symptoms delineated in the previous paragraph.

We can not predict how collapse is going to play out in India. Rohith Vemula in his final note makes this prophetic statement, “the value of a man was reduced to his immediate identity and nearest possibility”. When climate change and resource crises set in, leading perhaps to an economic collapse and famine, Indian society could be reduced to its immediate identity and nearest possibility. That’s a terrifying prospect, something we’ve already seen in Gujarat, Kandhamal and elsewhere. Thousands and thousands of Kandhamals and Gujarat could happen. Is it time to lose hope? Not exactly! Only if we learnt the right lessons from Kandhamal!

During the violence in Kandhamal there were people like Satyabhama who risked their lives to protect the lives of Christians. There are several other stories of such glorious courage from Kandhamal. Love and compassion could prevail over hatred.

The Kandhamal victims didn’t succumb to the mobsters of hatred. They rose together as a community to make sure that another Kandhamal should not happen. Yes it is a resilient community but it has a long way to go.

Yes an impending collapse is real. How are we going to thwart it? The UN has failed us. The Intergovernmental Panel on Climate Change has failed us. Our governments and captains of industry live a life in the Business As Usual scenario that produces demagogues like Modi and Trump. Where do we go from here?

I think we can learn a lot of lessons from Kandhamal people, how they rebuilt their community through love, compassion and sharing. We have to go further and ensure that the hegemony of the oligarchs over our lives is broken and ensure an equitable distribution of wealth and resources. Of course, we have to de-couple from our destructive dependence on fossil fuel energy. If we can do this as a community at the earliest, perhaps we could avoid a catastrophic collapse. And then we can say with certainty that another Kandhamal will not happen.

That’s the lesson I learnt from Kandhamal.

Binu Mathew is the editor of www.countercurrents.org. He can be reached at[email protected]