Remembering Annabhau Sathe, The Dalit Writer Who Dealt A Blow To Class and Caste Slavery 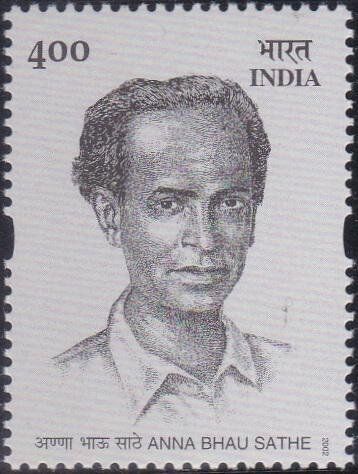 The postage stamp issued in Annabhau Sathe's memory by the department of Posts on 1 August 2002.

On his 99th birth anniversary, a tribute to the writer who died in dire poverty and remains marginalised within mainstream literary circles.

If Dalit literature is gaining the imagination of the public today, much of the credit goes to one person, Annabhau Sathe, whom other Dalit writers have acknowledged as the ‘founder of Dalit literature’.

Dalit literature mostly emerged from the lived experiences—fight for survival, casteist abuse incurred, and revolt against inequality—of marginalised communities and craves for equality while rejecting age-old customs and exploitation. It gives voice to the voiceless and exploited groups in a casteist society. Powerful condemnation and brutal attack on caste and class differences are the main themes of Dalit literature, which mostly is inspired from Ambedkar’s ideology and philosophy.

Tukaram Bhaurao Sathe, popularly known as Annabhau Sathe, was born in the Dalit community (Matang) on 1 August 1920 in Wategaon village in the Sangli district of Maharashtra. Poverty and caste discrimination stopped  him from getting any formal education and forced his family to move to Mumbai in 1931, where he worked in various jobs such as porter, shoe polisher and daily wage labourer, before finally ending up as a mill worker. While working in the textile mill, he got attracted to the Communist ideology.

His 35 novels, 10 folk dramas, 24 short stories, 10 powadas (ballads), one play and a travelogue have been published in Marathi by the Maharashtra government in 1998 and many more remain unpublished. Brahminical control over art has ignored Dalit art and culture. American writer Eleanor Zelliot, in her book ′From Untouchable to Dalit: Essays on the Ambedkar Movement’, notes that various art forms such as Tamasha (loknatya), Powada (Ballads), Lavani (combination of traditional song and dance), and Jalsa were unquestionably produced by low castes, but [kept] anonymous and never considered respectable.

He founded Lal Bavta Kalapathak (Red Flag Performing Troupe) in 1944 along with Shahir Amar Shaikh and Shahir D. N. Gavankar and became a full-time propagator of the communist party.

Annabhau Sathe’s fascination with communism is evident from his travelogue, Maza Russiacha Pravas (My Journey to Russia), that he wrote on his visit to the Soviet Union in 1961 as representative of Indo-Soviet Cultural Society. It tries to show how anti-USSR propaganda is misleading. Before his travel to USSR, some of his works were already translated to Russian, Czech, Polish and German languages such as ‘Stalingradche Powada’ (Ballad of Stalingrad, throwing light on labor issues and dedicated to workers’ struggle), so he was well-received in the USSR. His travelogue is attributed as the first travelogue by a Dalit (Ambedkar had travelled to many countries and wrote letters but those were not published in the form of a book).

Sathe’s writings contributed toward creating class consciousness among workers in society. In another ballad, ’Mumbaicha Girani Kamgar’ (Mill Worker of Mumbai) written in 1949, Sathe traces the miseries of factory workers and captures the disparities between the rich and poor in Mumbai.

There are divine looking high-rise buildings on Malabar hills, Indrapuri

There is a colony of Kuber, rich people enjoy all material comforts.

On the contrary, people living in Parel

Work hard day and night, eating whatever they get and sweat it out.

Coming from a poor background and experiencing the realities of life, he wrote on day-to-day realities, class/caste struggle and social interactions. His writing skills, sharp voice and mastery over various musical tools such as harmonium, tabla, drum, and bulbul made him a shining star on the streets.

He was a unique combination of Marxism and Ambedkarism, who analyzed class and caste struggles in his writings and wrote in praise to Lenin and Ambedkar. In the early 1950s, when then home minister Morarji Desai banned Tamasha (mainly because these were used by Communists party against Congress), he defied such oppression and changed Tamasha to Loknatya (public play) which achieved great fame.

His protagonists in the award-winning novel ‘Fakira’ (1959) not only reclaim their identity but also teach humanity and the value of forgiveness – a path towards much needed communal harmony in our times. Fakira (the titular character) depicts the reality of Dalits, living on the margins, and being exploited and suppressed not only by British rulers but upper castes.

Fakira emerges as a Robin Hood while looting grain from British stores and distributing it to starving people. Morally upright and ready to sacrifice his life for principles, Fakria believed that it is an absurdity that people are starving while food is rotting in a rich man’s house. He would rather die fighting than dying meekly – ‘I desire to live and die like a lion’. This is what we still see in a society that while thousands of tonnes of food rot in ‘godowns’, people starve to death. On India’s independence, Annabhau Sathe said, ‘this freedom is fake, when people of the country are starving’. After winning the state award in 1961 for his ’Fakira’, he dedicated it to Ambedkar. Annabhau Sathe’s novels had women protagonists as well, such as in ‘Chitra’, characters who fought against British and challenged patriarchy.

Annabhau inaugurated the first Dalit Sahitya Sammelan (Dalit Literary Conference) held on 2 March 1958 at the Bengali School auditorium, Mumbai. In his speech, he said these popular words, “the old belief that the Earth rests on the head of Sheshnag is untrue. It finds its balance on the palms of toiling Dalits and workers.” He also reminded Dalit writers of the responsibility that they have: “Dalit writers are entailed with the responsibility of liberating and shielding Dalits from the existing worldly and Hindu tortures as the long-standing conventional beliefs cannot be destroyed instantly”.

Annabhau’s poetry mirrors the anguish, helplessness and pitiful life of lower classes and lower castes in the society and gives a call to oppressed classes and Dalits ‘to break the chains of class and caste’, taking inspiration from Ambedkar. In his poem ’Take a hammer to change the world’, Annabhau calls for unity to fight against the tyranny and envisions a society without exploitation, almost on the similar lines as Saint Ravidas envisaged in his couplet ‘Begumpura’ almost 600 years ago.

Take a hammer to change the world

Why the elephant is stuck sitting

In the mud of slavery?

Shake your body and come out,

Take a leap to the forefront!

The rich have exploited us without end

The priests have tortured us

As if had eaten jewels

And thieves had become great

Sitting on the chariot of unity

To break the chains of class and caste

Hold to the name of Bhim!

Though he remains unacknowledged, Sathe’s work played a vital role in India’s labour as well as freedom movement, creating awareness about labour rights and issues.

My maina is left behind in the village

my heart yearns for her.

In the story Smashanatil Sone (Gold From The Grave), Annabhau Sathe describes the pain of a Dalit man, Bheema, who comes from a small village and, unable to find a job in Mumbai, starts digging graves at midnight to find gold buried with the corpses. Sorrow, anger, rejection, poverty, unemployment, rebelling to get freedom from the shackles of class and traditions and circumstances that lead people to do unconventional jobs are common imagery in Annabhau’s writings.

Present-day Communists ignore him due to his caste and Ambedkarites disregard him for his inclination towards Communism.  To ignore any of this side would be an injustice to his legacy. His poetic genius cannot be matched by anyone. There was no poet like him, there is none and there will be none like him. He was truly a legend beyond imagination.

While the Communist Party published works of most of its members, Annabhau Sathe’s work was hardly published (or published depending on the political agenda of the party) by them. Ignored by society and government, Annabhau Sathe died on 18 July 1968 in dire poverty and remains marginalized within mainstream literary opinion.