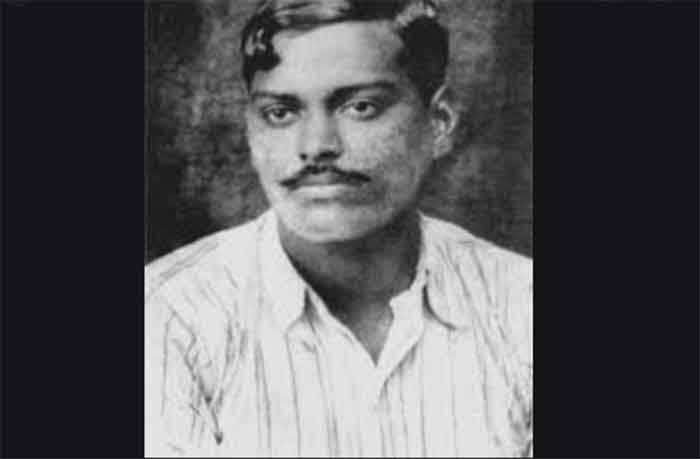 Chandra Shekhar Azad has been one of the most enduring and inspiring symbols of courage and resistance in India. He symbolizes for millions of people in the country indomitable  spirit of great courage in standing up for justice and freedom. As we remember him on his martyrdom day on February 27 we will of course remember his many deeds of courage and valour, but in addition we should also remember him in the context of the great relevance of his work and message for present times.

While Chandra Shekhar Azad certainly valued his revolver, we should not forget how restrained he was in actually using it. If we read his life-story carefully, time and again there would be call for action and the restraining influence often came from the commander Azad who was very careful in all such decisions. In this context we also remember the wider message of the dearest colleague of Azad, Shahid Bhagat Singh, who said very clearly—non-violence as a policy  indispensable for all mass movements  while use of force justifiable only when resorted to as a matter of terrible necessity.

It is in this wider framework that the message of great revolutionaries of freedom movement like Azad and Bhagat Singh and Ramprasad Bismil  should be understood with more emphasis on the conclusions they were drawing from their invaluable experiences in the last days of their short but very eventful  lives. Their broad message is certainly not a message of violence, it is instead a message of deep and long-term commitment to  create a society based on justice and equality, to build a nation which is free from exploitation and injustice.

In addition these revolutionaries placed great emphasis on communal harmony, inter-faith harmony, so that there could be greater national unity to achieve the higher objectives of justice and dignity and equality.

A strong message we should take from these revolutionary freedom fighters is to encourage and honour those young people who come forward to create a society based on justice, equality and inter-faith harmony.

Let us not forget that all these great revolutionaries were very young when they undertook very courageous responsibilities and fulfilled them. Chandra Shekhar Azad became a famous freedom fighter at the age of only 15 ! He achieved martyrdom at the age of 25 , fighting a huge force of colonial police who had surrounded him from many sides in Alfred Park of Allahabad. So in just one decade he achieved so much that he has always been remembered since then for his great courage and commitment to the freedom of the country and for striving to  create a new India which is free from exploitation and injustice.  As he and his colleagues in the Hindustan Socialist Republican Association pointed out time and again, their ultimate aim was not just freedom from colonial rule but also creating a society based on justice and equality.

As most of the revolutionary life of Azad was spent in carrying out work away from the gaze of colonial rulers and their police, the only time when the people got to openly see his great courage was at the time of his very first participation in the freedom movement as a very firm activist, at the age of 15 years, of the satyagraha initiated by Gandhiji .

It was the year 1921 and the famous Non-Cooperation Movement against colonial rule was making waves in India. At the time of the protests of this movement in Varanasi, a freedom fighter who had been felled by police lathis was still being beaten in a most cruel way by policemen.

A 15-year old boy who had joined the protest demonstration could not bear to see this cruelty on a fallen helpless man. He picked up a big stone and hit it with force on the head on a policeman who was hitting the fallen man with his baton again and again. The policeman then left the fallen man and rushed after the boy. He made them run after him for some time (so that the injured man could be saved) and then disappeared in the narrow lanes of Varanasi.

However the police kept looking for him and managed to nab him later. When the policemen questioned him, he refused to cooperate with them. Then the policemen caned him. There were big canes which could peel the skin.

“the real name your real name”.

And so this went on. The boy replied in terms of Azad and Swatantra. When he was beaten up more, he shouted ‘Mahatma Gandhi Ki Jai’, ‘Bharat Mata Ki Jai’ each time he got a cane beating.

Even when his body was badly wounded with cane beatings, the young boy did not stop his slogans of freedom. Even when layers of his skin started peeling due to cane beating, he persisted in shouting Mahatma Gandhi Ki Jai.

Soon the entire city was talking about his courage and bravery. When he was released from jail, he was carried by people on their shoulders, the entire crowd shouting slogans of freedom movement.

This was the first and the last time that the people saw the legendary courage of Azad in action. During the next decade so many stories of the courage of Azad spread, but of course people never saw Azad. He could never be arrested despite the massive search for him launched by the colonial government.

On February 27 on the death anniversary of Azad the nation will honour him of course, and while we will honour his great courage as a young prisoner we will also condemn those who were so cruel towards the teenage prisoner,  but at the same time should we also not remember the numerous students and youth who have been imprisoned and victimized in recent times for their close involvement in issues of justice and inter-faith harmony, freedom of expression and   environment protection, and for supporting movements of farmers and workers?

Dozens and dozens of articles, statements, appeals, pleas by senior journalists, jurists and  academics as well as retired judges, very senior officials and police officials, very senior political leaders of the country are available today in the public domain which raise their voice against the imprisonment and victimization of many students and youths for their involvement in socially relevant activities relating to communal harmony, justice, freedom of expression, support of farmers and workers and their movements. All these learned and experienced persons who are raising their voice on behalf of young activists could not possibly be wrong. According to these various accounts, some of the victimized young persons are students of  JNU and Jamia Millia or of other universities, some of them are those found to be supporting farmers and workers, some of them are those working for communal harmony, some for other causes of democracy and justice. Such young people should be encouraged, not imprisoned and victimized. All the time there are calls to young people to serve their society and country, and when they actually come forward , they are victimized. This is not fair. This is not just at all.

So when we pay homage to Azad and Bhagat Singh in the days to come, we should think also about all these students and young persons who potentially can be the Azads and Bhagat Singhs of tomorrow, but are wrongly and unjustly imprisoned or victimized in independent India. Senior retired judges and jurists who have already raised these concerns should be requested by the government to immediately review all such cases  so that justice can reach all these students and young persons as early as possible.

Bharat Dogra is a senior journalist and author.

Jagmohan Singh is Chairperson of Shahid Bhagat Singh Creativity Center and Chairperson, All India Forum for Right to Education. He is also nephew of Shahid Bhagat singh and has devoted his life to spreading the ideas and ideals of the great revolutionary and his colleagues. Both writers together are joint authors, with others, of recent book on freedom movement  When the Two Streams Met  and its larger Hindi version Azaadi ke Deewanon Ki Daastaan.